Index, Dedicatus545 - The dedicated lamb protects the knowledge of the strong, The List of Prohibited Books

Eidetic memory, Can recall any of the information in the 103,000 grimoires in her head instantly, Very powerful magic (in John's Pen mode), Spell Intercept, Sheol Fear

Eating, Watching TV, Hanging out with Touma and her friends

Stay with Touma, Prevent her knowledge of the grimoires from falling into the wrong hands

Index Librorum Prohibitorum, generally known simply as Index, is the titular deuteragonist and lead heroine of the light novel and anime series A Certain Magical Index, also making a few cameo appearances in A Certain Scientific Railgun. She is a member of Necessarius, the 0th Parish of the English Puritan Church and has an eidetic memory. She holds within herself 103,000 magical texts known as grimoires.

She is voiced by Yuka Iguchi in the Japanese version of the anime and Monica Rial in the English version, the latter of whom also voices May Chang, Mirajane Strauss and Yukari Sendo.

Index is small in stature, has a petite build, and, much to her chagrin, a flat chest. Although she looks like a little girl (and is even called one by Touma), she is actually 15 years old, making her one year older than the 6 foot 7 Stiyl, and only one year younger than Touma. She has thigh-length, silvery-white hair, and large green eyes. She is also often seen wearing her Walking Church, a white, modified nun's habit with gold highlights. It is an accurate replica of the Holy Shroud of Turin and offered Index ultimate protection from most attacks, however, it was destroyed by Touma's right hand. She still wears it, though safety pins are now needed to hold it together. She is noted by Touma to be a "gaikokujin" (foreigner), and it is likely that her nationality is English.

Due to being raised in a church and having no memories of her life up until a year before she met Touma, Index is quite innocent and naive, often being elated by things that an adult or even people her age would find mundane. She is slightly ignorant and curious of modern technology, not knowing what a touchscreen was or how it worked until Hyouka Kazakiri showed her. She is a very cheerful and optimistic young girl, even after many years of having her memories erased annually.

Index can be easily irritated especially when it comes to Touma, who usually ends up angering her in some way as a consequence of his own bad luck. He is often bitten by Index as punishment. It is a recurring gag for Index to bite Touma whenever he has inadvertently annoyed or irritated her in some way, occurring even in serious situations or in front of important persons, or out of anger for putting himself in serious danger and making her worry. She has even bitten him out of anger for trivial things that he has not even done, due to her tendency to jump to conclusions. At one point, Touma even compares her to a mosquito. However, in Toaru Majutsu no Index no Subete, it is noted that it is a sign of affection towards him, as Touma is the only person whom she bites. Index can also be rather bratty at times, often getting annoyed when when Touma doesn't spend enough time with her.

Index is also a freeloader, due to the fact that Touma is the one who does all the work in the dorm room, while all she does is eat, sleep and watch TV. While this makes her come off as lazy and greedy, it is not without justification; due to having virtually no memories other than the knowledge of the grimoires, she has absolutely no domestic skills, which is shown when Touma gets tired of her freeloading and tries to get her to earn her keep, only for her to nearly start a fire while cleaning the bath.

Although she can be irritable at times, Index is usually very gentle and polite, not just with Touma, but with people in general. She has a kind nature, as shown when she picked up a stray kitten and took it home, although Touma initially refused. Despite often getting annoyed at Touma for his martyr complex, she also has the trait of sacrificing herself for the sake of others which is why several people befriended her in the past who still keep caring for her despite her memory loss each year. She even attempts to get Touma to stay out of matters involving her church, insisting that she has to solve the problem herself, despite Touma being objectively the better fighter. However, this is partially out of concern for him, since nearly every major encounter with a magician results in Touma getting landed in the hospital. Index is also extremely intelligent, bordering on omniscience, as a result of having the knowledge of 103,000 grimoires stored inside her. Due to her photographic memory, Index is able to remember everything in the books and often gives Touma exposition when needed.

Index also has an extreme appetite, as shown when she met Accelerator and made him to spend all of his money treating her to food. In fact, the very first thing she said to Touma was that she was hungry. She also thinks out loud about what she wants to eat when she and Touma are on a plane to England. Index has taken a liking to the anime Magical Powered Super Android Girl Kanamin and once cosplayed as her. She has strong feelings towards Touma and even confessed her love after knowing Touma lost his memories because of her, however he avoided answering by changing the subject of the talk since he has no idea about what kind of feelings he used to have with Index.

Her sorcery name is Dedicatus545, "The dedicated lamb protects the knowledge of the strong". As the vessel for 103,000 magical books, she is unable to use conventional means to cast spells; instead, she can only use abilities which intercept opponents' spells. Since magic books that are poisonous to the mind. This made Yamisaka Ouma wonder if Index is even human.

After Touma negated the runic symbol that was meant to destroy her mind, while in John's Pen Mode, she was capable of using several very powerful spells:

She can also cast two other magical abilities that don't consume any mana energy whatsoever:

There are 103,000 grimoires hidden within Index's memory, however there are only a few instances where the names of several books have been explicitly stated. Strangely, fictional grimoires in reality are real and are part of Index's representative grimoires in the series. 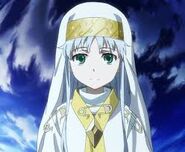 Add a photo to this gallery
Retrieved from "https://hero.fandom.com/wiki/Index_Librorum_Prohibitorum?oldid=1630118"
Community content is available under CC-BY-SA unless otherwise noted.