Insaniac gives a little bit of comedy to situations of the The Gorgonites versus The Commando Elite. That hyperactive purple creature is just full of energy in which he is always talking so fast and laughing so very very very hysterically (hence the name Insaniac). He has a very very very crazy personality in which he will do anything to have a great time. He supports his gorgonite brothers but his primary objective is just to be so very crazy and to laugh a lot.The strange thing about Insaniac, is that his gorgonite emblem is located in his tribal necklace.

Insaniac was created by Irwin Wayfair who was toy creator of company called Heartland Playsystems and then bought out by Global Tech. Industries. His partner's name was Larry Benson (the creator of the evil Commando Elite).

Insaniac is a Gorgonite. He was supposed to really do anything except to always have lots of fun and make jokes all the time. There were only two times Insaniac really helped out and that was when the Gorgonites finally tried to help the Fimple and Abernathy families fight back against the Commando Elite. 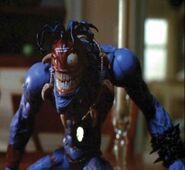 Retrieved from "https://hero.fandom.com/wiki/Insaniac?oldid=1999242"
Community content is available under CC-BY-SA unless otherwise noted.