No information
Inspector Tezuka is a tough-minded police officer. She is voiced by Tamlyn Tomita.

Inspector Tezuka is a dark-grey bird with a black beak and hair. She wears a matching brown coat and hat, along with a white shirt and grey pants.

Tezuka is shown to be strict in keeping the city of Tokyolk safe from disasters. She is shown to have zero-tolerance towards criminals who are disturbing the large metropolis city.

Arriving in the modern metropolis of Tokyolk, Tezuka arrives towards Gyro Gearloose, B.O.Y.D., Huey and Gizmoduck (without his armor) where she warns Gyro that she is keeping the city safe from danger. Asking to know where he is hiding B.O.Y.D., he tells her that he has never seen Akita since his last encounter. During a conversation with B.O.Y.D., Tezuka's conversation between her and B.O.Y.D. is interrupted upon noticing Lil Bulb spraying graffiti across the town believing he is destroying the city just as she chases him.

Tezuka later appears arresting stopping a gem burglar for her crimes just as she notices Gizmoduck trying to talk to her to which she prepares to arrest him for supposed suspicious scanning across the city to which Gizmoduck tells her he is innocent. Asking Tezuka about her relationship with cybernetic citizens, she tells him about the time where Gyro and Akita destroyed the city with a destructive robot to which Gizmoduck denies that Akita's robot would never destroy the city. Later when Huey and B.O.Y.D. arrive towards Gyro and Tezuka, Tezuka calls for backup to stop B.O.Y.D. from destroying the city. Just as Gizmoduck and Gyro tell Huey to stay away from him, he intervenes with the argument about B.O.Y.D.'s bad reputation, to which Gyro shows B.O.Y.D. his flashback about him and Dr. Akita inventing him to be a defense robot to which B.O.Y.D. goes out of control and attacked the city and Tezuka stops him.

Tezuka and the gang arrive towards Dr. Akita revealing his true actions towards B.O.Y.D. who wants him to be a destructive robot due to his plan to defend the city only to find out that Akita betrayed Gyro for trying to treat B.O.Y.D. as a destructive robot. Tezuka then confronts Dr. Akita just as he tells B.O.Y.D. to kill her to which Gizmoduck defends her from him. Dr. Akita arrives again just as she and Gyro confront him with Gyro telling him that Dr. Akita forced B.O.Y.D. to be a weapon. Later when an out-of-control B.O.Y.D. prepares to destroy Gizmoduck's helmet, Tezuka then stabilizes him just as she notices him escape. Later when Lil Bulb defeats Akita, Tezuka arrests him for his crimes for almost destroying the city. Tezuka then notices B.O.Y.D. being friendly just as she tells him and Huey to leave the city with his bad reputation cleared. 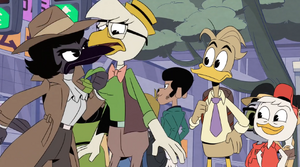 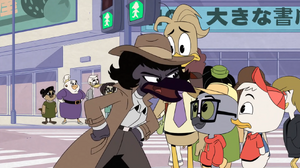 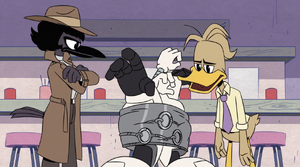