Leader of the Hellsing Organization

Sir Integra Fairbrook Wingates Hellsing is one of the two main female protagonists of the manga series Hellsing and the anime and OVA series based off it. She is Alucard's master and the head of the Hellsing Organization. She is a descendant of Abraham van Hellsing and is the last of her family due to her uncle trying to kill her. She was saved by Alucard and she succeeded in killing Richard Hellsing. She protects England and her Queen against the forces of the supernatural.

She is voiced by Yoshiko Sakakibara in the Japanese version of the anime and Victoria Harwood in the English version.

Sir Integra Hellsing, who is the head and last member of the Hellsing family, is a 22-year-old British noblewoman and a member of the Protestant Knights, the Bureau Director of the Hellsing Organization, and the current master of Hellsing's vampire, Alucard. Integra has a very collected attitude, rarely allowing her emotions to get in the way of business. However, she is sometimes prone to bouts of anger. As the Hellsing family is "on a mission from God," she values her duties to protect the United Kingdom, its Queen, and the Anglican Church above everything else. For her, failure is not tolerated, especially her own. She runs the Hellsing Organization with charisma and patriotism, and she is one of the few people who can stand up to the force of Alucard's personality and command his respect.

Born into the prestigious and mysterious Hellsing family, Integra has been sheltered and educated all her life to take the place of her father, Sir Arthur Hellsing, as Bureau Director of the Hellsing Organization. Integra's mother does not appear in her flashbacks, suggesting either that Integra never met the woman or that she died when Integra was very young. When she was 12 years old, Integra's father passed away and entrusted her with their family's mission to lead the Royal Protestant Knights and protect England, and asked his brother, Richard, to aid her.

Almost immediately after Arthur’s death, Richard Hellsing, jealous of Integra for inheriting the family headship, attempted to hunt her down and kill her. Integra escaped her traitorous uncle and managed to reach a dungeon in the mansion's sublevels, where her father had said she would find her salvation. Hoping to find a knight in shining armor, she stumbled across an old, dried-out corpse, instead. Richard found her, cornered her, and shot her in her shoulder, spilling her blood across the floor of the room. The corpse, actually a vampire whom Arthur had imprisoned 20 years earlier, awoke and licked up Integra's blood. Rejuvenated, it proceeded to kill her persecutors, thus saving her. Richard, desperate, attempted to kill Integra one last time, but the vampire blocked his bullet. Picking up a gun, Integra shot and killed her uncle, becoming the last descendent of the Hellsing bloodline. The vampire, whose name was Alucard, became her loyal servant.

Not long after, Integra was knighted and introduced to Vice Admiral Sir Shelby Penwood, a former friend of her father. Upon seeing Integra for the first time, Sir Penwood said that she was far too young to fulfill her duty. He revised his opinion during the actual storyline, in which he admitted that it was an honor to have met and served with her in his farewell message, prior to his death. His sacrifice was just one of the many examples that helped solidify Integra's resolution about humanity's worth and continue her duty.

Integra as a child was more timid than she is now, yet a very willful girl, being brought up with a commanding presence that even Alucard respects. She was forced to grow up quickly after her treacherous uncle tried to kill her. When Alucard became her servant, she grew more confident and comfortable with her position as head of the Hellsing family and a Knight of the Round Table. Much like Seras Victoria, Integra experiences a coming of age, gaining experience and losing her remaining innocence as events unfold and the war begins, transforming into a leader with an iron resolution who does not flinch at the first signs of danger and who gains wisdom through dire losses and betrayals. The Major recognizes her change from a "beautiful Fräulein" (he goes so far as to apologize for calling her this) to the most dangerous enemy who stands in the way of his plans, calling her forth into his Zeppelin. During inside she and Seras slaughtered the remaing forces and then approched the Captain, Integra leaves Seras to go fight the Werewolf while she goes for the Major. Integra reaches the room where the Major is and she tries to break his glass dome but fails. She witnessess Alucard's dissapearance and she raged against the Major and Seras, who after defeating the Captain uses her cannon to break the dome along with blowing half of the Major which reveals that he is a cyborg. Integra and the Major both gunned at each other and Integra gets her eye shot but suceeds in killing The Major. She and Seras feel Walter passing away, the battle won, the two then fled from the giant Zeppelin. 30 years later Integra is now an old woman, after having a fencing match against Penwood's grandson, the new Icariot leader M'quive appears and says that they are tired of waiting integra asks them to leave and they accept. Integra and the current Penwood talked about his grandfather the orginal penwood and claims that he has slashed Nazis and then the current Penwood leaves. Seras and Integra were waiting for Alucard to come saying that it has been 30 years. When Integra went to bed Alucard finally appeared and she offered him her blood similiar to how she gave Seras her blood.

Integra's known family includes Abraham Van Helsing, a Dutch metaphysican and philosopher and one of the main characters of Bram Stoker's Dracula, who was either her grandfather or her great-grandfather. Her father was Sir Arthur Hellsing, who died when she was 13 years old (12 years old in the manga), in 1989. Even though Integra had a far from normal childhood and did not go to school or a daycare, it was obvious that Arthur loved Integra very much, and wanted the best for her. It was from him that she inherited her current position as Bureau Director of the Hellsing Organization and her seat in the Convention of Twelve. Her uncle, Richard, sought to kill her and take the headship of the Hellsing family for himself. This was prevented by Alucard, when he blocked the bullet that was fired at Integra's face. Richard's exact motivations are unknown, though it is possible that he coveted the power and prestige of a seat in the Convention of Twelve. Another reason is hinted at in the OVA, in which her uncle continuously calls Integral "Fräulein". This indicates a possible connection to Millennium. Integra herself fired the bullet that killed Richard.

There is a general assumption that Integra is not of full European descent. Her skin color is a creamy brown, darker than that of many other characters. In a flashback in the anime(Order 10: Master of Monster), there is a photograph of →an infant Integra being held by a woman wearing a sari, suggesting that her mother might have been Indian or of Indian descent.

Integra is a superb fencer with fast reflexes and speed; she has been able to block Alexander Anderson's attack (volume 1 of the manga) and behead a Nazi vampire after a car crash that shook her. In volume 9, she's even shown to be capable of cutting down a vampire soldier attacking her head on, despite the fact that the heavily armed and battle-hardened mercenaries of the Wild Geese couldn't stand a chance against such enemies.

Her aim with a pistol is deadly accurate, as well. The anime displays her skill in Order 02: Club M, where she is seen shooting through the same hole on a practice target with what looks to be a Walther PPK (she also uses a Beretta 93R at one point). Such a degree of control with any pistol from anything other than a fairly close range is incredibly impressive, if not impossible. Another piece of evidence to suggest this is her ability to shoot Jan Valentine six times with the same pistol, with the bullets forming a cross on his face (more impressive, considering he recoiled and was sent backwards from the force of each bullet), although this is demonstrated only in the original anime. She shows similar abilities in the manga during Volume 6. But perhaps the best example of her shooting skills is in volume 1 where she emptied a moddified Sig-Sauer p226 into Alexander Anderson's blessed bayonets, shattering them just as he was about to kill Sereas Victoria.

Very intelligent, Integra was able to determine the route Leif and Jessica would take and who their next targets would be by following their patterns, and she devised a strategy accordingly. She was also the first to guess what Jan's mysterious clue, "Millennium", was actually referring to. In spite of her talents, she is still fairly young and inexperienced as a leader, and thus unable to grasp or deal with the full extent of the Major's plans. However, she makes up for that in her stern and unbendable will, not backing down no matter the situation. This clearly shown where she was able to order members of Iscariot, the organization that wants the Hellsing Organization destroyed, to follow her orders and protect her on her way back to her mansion.

It is also speculated by fans that, just like her father and grandfather, Integra was educated in occultism and alchemy to be able to control Alucard's releases and to finish the process of building him into the "ultimate undead" (in the anime, this was made more obvious when Integra performed a ritual with Masonic imagery in Orders 11 and 12). In recent chapters of the manga, it seems that Integra can indeed use some form of magic to control Alucard's abilities, but whether it is due to her magical abilities or her position as Alucard's master remains to be seen. 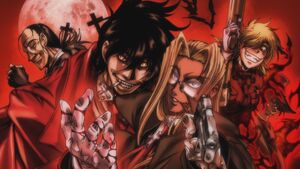 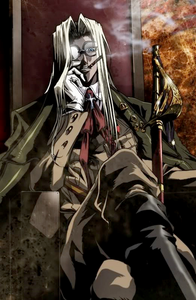 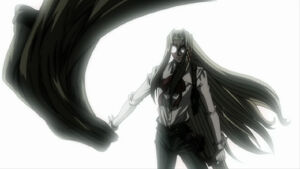 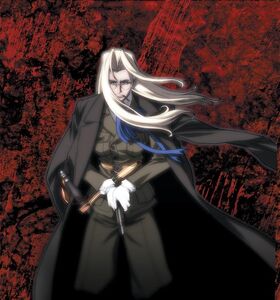 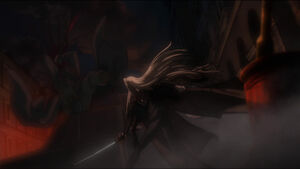 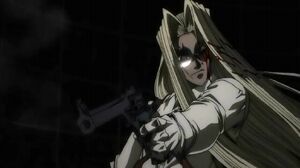 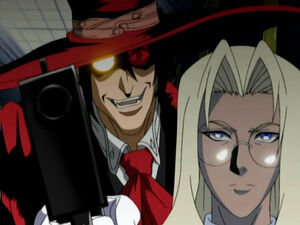 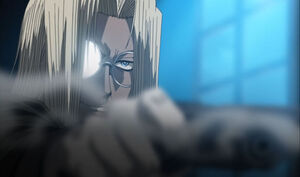 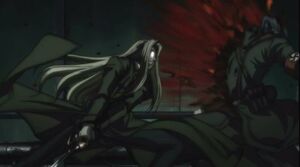