Protecting the World/Galaxy
Protecting his Loved Ones

Markus Sebastian "Mark" Grayson, better known by his hero mantle Invincible is the titular hero of the same series.

He was created by Robert Kirkman and Cory Walker. A young man new to the superhero scene, but nonetheless enthusiastic about doing good in the world. He gained his powers during his last year in high school, and decided to become a superhero like his father.

He is half-human and half-Viltrumite hybrid who spends most of his time protecting innocents and is also a father. His father Omni-Man was the emperor of the Viltrumite and was the member teen team later renamed New Guardians of the globe.

Mark is the son of superhero, novelist, and Viltrumite Nolan Grayson and Deborah Grayson on Earth. Mark would learn of his heritage form his father, and got his powers upon his senior year at Reginald Vel Johnson high school. Mark got his powers when throwing the trash from Burger Mart, throwing the bag in the atmosphere.

Upon getting a costume from Art and taking the name Invincible from his principal (who told him he was not invincible when protecting someone from a bully), Mark would embark on defeating villains such as his teacher David Hiles and a zombie like creature with his best friend William Clockwell. Around this time, he was ordered by his father to stop an alien that would come to Earth, but befriended the alien named Allen and realized that he was going to the wrong planet for years.

Mark met the Teen Team, befriending member Samantha Wilkins/Atom Eve and later would protect the world from a Flaxan invasion alongside his father. Mark's secret identity was revealed by William, who said he would not tell anyone, and was later learned by Samantha. Though all was going well, members of the original Guardians of the Globe were being killed by his father, who revealed that he was an agent of the Viltrumites to take over Earth, as their species were conquers instead of peaceful explorers.

Mark fought his father and resisted his attempts to make him understand, leading to him to be beaten by his father across the world until Nolan left (not being able to kill his son). Going into a coma, Mark would later awaken and work for the government with Cecil Stedman to stop galactic threats. Stedman later sent Mark into space, and Mark met with Allen once again, and informed him that he was a human-Viltrumite hybrid and that his father left the Earth. Allen sympathized with Mark, and asked him what he was going to do, and Mark replied that he was going to finish high school.

Later on, Mark worked with Eve and the Guardians of the Globe in fighting the Flaxans once again, and defeated them by destroying wrist band that slowed down their aging process. Upon returning home, he sees the Immortal levitating near his house, and learns the he will be watching him so he won't follow in his father's footsteps. Mark argued that he wouldn't do so, and the Immortal flew off, and Mark later met Cecil in his room, who told him that his conversation with his father was leaked. 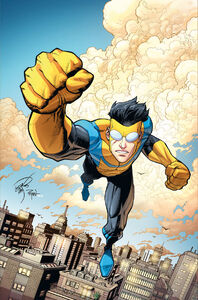 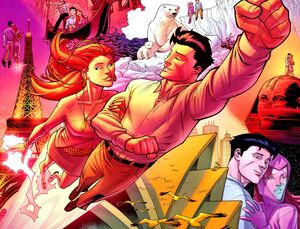 Mark upon Eve wanting to end their relationship. 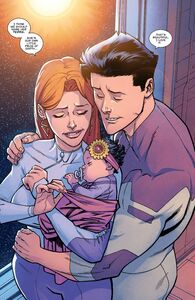 Mark, Eve, and Terra.
Add a photo to this gallery

Retrieved from "https://hero.fandom.com/wiki/Invincible?oldid=1774460"
Community content is available under CC-BY-SA unless otherwise noted.