Irene Law is a main character in the Ninja Gaiden series. She is a CIA agent who works in it's Secret Auxiliary Unit. She is also the love interest of Ryu Hayabusa.

Irene was a secret agent from the CIA who was hired by the U.S government. She was a skilled markswoman of her firearms, agility, strength and investigating the looming evil around the world without hesitation.

Irene is a beautiful pale woman, with short silver blonde hair, she wears a black leather suit with vertical whites strips down the front, long black glove on her left and medium black glove on her right, and thigh high black boots and leather tights. As well as several storage weapon holsters on belts around her waist, right arm and right thigh. She also has a small red tattoo above her breasts.

Irene is a headstrong gutsy woman, willing to do whatever it takes to get the job done and very confident in her abilities. She is also very caring and affectionate towards Ryu Hayabusa.

Sent by the CIA on a top secret case involving fiends, Irene discover plans to resurrect the Archfiend and an unholy alliance between the Black Spider Ninja Clan and the fiends. With this knowledge Sonia goes searching for Ryu to help her stop the Black Spider Ninja Clan from obtaining the Demon Statue, in possession of the Hayabusa Ninja Clan, and required by the fiends to resurrect the Archfiend.

Irene first encounters Ryu under her code name 'Sonia'. Tracking down a contact who might know the whereabouts of Ryu Hayabusa, on a quiet evening Sonia sits in Muramusa's shop located in Tokyo, asking Muramasa if he knew where Ryu might be. Muramasa tells her how elusive a ninja like Ryu is, suggesting that if he isn't in the Hayabusa village, he could be anywhere in the world.

Promptly after the conversation, Sonia is ambushed as a Black Spider Ninja smashes through the shop's wall, knocking Muramasa off his ladder and into a pile of boxes. Sonia quickly draws her two pistols and shoots the Black Spider Ninja in a dual wielding style. She then attempts to flee the shop, but encounters a Black Spider ninja waiting for her outside, reacting quickly she blows off his head with her pistols, but soon after another ninja attacks her from above, knocking the pistols out of her hands in the scuffle. Defenceless, Sonia attempts to run but is snared with chain thrown by one of the ninja. As the 3 ninja approach a subdued Sonia, from out of the shadows they are suddenly cut down by Ryu Hayabusa, but before he can free her, Black Spider reinforcements arrive. As his minions held Ryu back, the black spider leader escapes and takes Sonia captive with him.

Later that night on the top floor of a twin skyscraper, Sonia, tied to a chair, is physically interrogated by Elizébet, surrounded by Black Spider Ninjas. As the interrogation progresses, the building alarms go off signalling an intruder who turns out to be Ryu. Seeing Ryu cut through the black spider ninjas as he fights his way up the floors, Elizébet handcuffs Sonia and drags her to the helipad on the building rooftop. While Ryu is busy fighting the Black Spider Shadow Ninja Rasetsu and his minions on the rooftop, Elizébet drags a struggling Sonia to the awaiting helicopter. Ryu manages to slay Rasetsu just as the helicopter takes off with Elizébet and Sonia hanging out the side door. Before it can escape too far, Ryu shoots up a few shurikens, one of which slices Elizébet across the side of her face as Sonia struggles to break free. Having enough Elizébet tosses Sonia down, Ryu then swiftly runs towards Sonia, catching her in mid air as she was free falling. As Ryu uncuffs her, Sonia relieved at finally finding Ryu, informs him of the impending danger to his clan and village brought upon by the black spider and fiendish alliance in their plan to restore the Archfiend.

However her warning comes too late as Ryu is unable to prevent Elizébet from obtaining the Demon Statue and unleashing armies of fiends into the world. Sonia eventually finds herself in the apocalyptic aftermath of New York, flying a helicopter as she dogfights flying demons high above the city. As the night progresses, Sonia discovers the source of the destructive weather and demonic fiends, a deity known as a Greater Fiend. She then rendezvous with Ryu at the Brooklyn Bridge, transporting him over to the Greater Fiend Alexei on Liberty Island, then extracting him once the Greater Fiend is slain.

Tracking down Elizébet and the Demon Statue to the Flying Fortress Daedalus, Sonia later arrives at the Coliseum in the Aqua Capital where Ryu is busy fighting a mob of werewolves. Swooping down in her helicopter and firing hellfire missiles into the crowd of werewolves, Sonia airlifts Ryu out the frenzy, and the two fly towards their next objective.

Catching up to the Flying Fortress Daedalus, Ryu launches himself onto the Daedalus airship as Sonia provides cover fire from her helicopter, during the skirmish she is hit but miraculously manages to eject herself right before the damaged helicopter explosively collides with the airship. Armed with firearms and a rocket launcher, Sonia makes her way through the airship's interior, causing alarm and emergency announcements over the intercom as she sabotages the Flying Fortress. Eventually she meets up with Ryu briefly before the pair separate again working to bring down the Daedalus. Taking out the airship's critical systems she meets up with Ryu again as the airship separates in two, with them on the falling half and Elizébet escaping on the still airborne half. Rushing through the hallways they end up in the cargo bay where Ryu quickly mounts a motorcycle and Sonia in the backseat. With her rocket launcher Sonia blasts a large hole in the exterior hull and the two ride out on the motorcycle landing on the snow peak surface below just as the airship makes it's explosive crash landing.

Sonia would later shadow Ryu all the way to the Temple of Sacrifice deep in the caverns of the Amazon jungle, where he manages to defeat Elizébet but fails to retrieve the demon statue. Her encounter with Ryu would not go over well with her, as he tells her that she can no longer follow him due to his path taking him to the dangerous lands of the dead and into the deepest depths of the hellish underworlds. Ignoring Ryu, Sonia journeys into the underworld where she is quickly taken captive by Alexei. Treating Sonia as his new pet, Alexei redresses her in looser attire and locks her in a large cage while tormenting her, but just as he savors his enjoyment, Alexei senses Ryu entering his underworld domain. After dispatching Alexei for good, Ryu frees Sonia from her confinement and journeys further ahead to stop the Archfiend.

While Ryu battles ahead clearing a path, Sonia slowly makes her way out of the underworld, catching up to Ryu just as he defeats Vazdah the Archfiend. Upon catching sight of Ryu, Sonia hastily runs up to him and hugs him as the area is lit up by many bright orbs of essence from Vazdah's gigantic corpse. The two journey towards the surface, the peak of Mt. Fuji, but just as they're part way there, blood from Ryu's wounded arm drips down and makes contact with Vazdah's exoskeleton causing a reaction that reinvigorates the Archfiend into his true form, skyrocketing up towards the surface. Reacting quickly Ryu shoots himself up to confront the gigantic Archfiend once more before the demonic supreme deity can escape to the realm of the living and unleash his fiendish world order upon its inhabitants. As the powerful ninja and supreme deity clash, Sonia works to avoid the explosive backlash from the titanic battle. In the aftermath Sonia scours the debris for signs of Ryu. Finding him under the Archfiend's boulder sized skull, Ryu and Sonia make their way towards the surface where they stare out into the expanse of clouds below from the volcano peak, watching the morning sun rise.

Although Irene does not physically appear in the original Ninja Gaiden 3, she does help Ryu a little in his battle against the LOA. She gives the Japanese Self-Defense Force information about the Black Narwhal's location, under the signature of one word: Sea-swallow. Ryu immediately recognizes it as a code from Irene, knowing that they can trust the information she gave them.

In the expansion, Razor's Edge, Irene contacts Ayane and asks her for help, knowing about Ryu's condition. She communicates with the ninja through an earpiece, which also has a GPS signal and shows Irene where Ayane is. In Paris, Irene helps Ayane by stopping missiles from destroying the city. Later, Irene has Ayane track down the Black Narwhal and find out more about the LOA. As the ship prepares to dive, Irene urges the ninja to get off the ship. She becomes worried when she tracks the earpiece on board the Black Narwhal. But Ayane then appears behind Irene on the dock, showing that she knew that the earpiece had a GPS signal and that Irene was tracking her. Irene tells Ayane that she and her kind are only ninjas, neither enemies nor allies, and cannot be trusted. She then goes on saying that she is only after Ryu because she wants to help him. When Ayane asks what's up between her and Ryu, Irene simply replies that she knows him better than the ninja.

As Ryu searches for his father's killer, Irene meets Ryu where she shoots and captures him with a tranquillizer dart. She passes him the Shadow demon statue, and is later taken hostage by the Jaquio to force Ryu to hand over the statue. Although Ryu complies, the Jaquio keeps Irene to be sacrificed, and drops Ryu into a pit. However Ryu manages to find a way out and defeats the Jaquio, escaping the collapsing temple with Irene. As she falls in love with Ryu, Irene disobeys an order from Foster to kill him.

Irene is attacked by Ryu's Doppelgänger while investigating a secret lab. She falls off a cliff into the ocean and is presumed dead. However, she survives the fall, and turns up later in the last encounter with Foster. She points a gun at Foster to arrest him and stop his plan, but her weapon is useless against the Doppelgänger. She is reunited with Ryu at the end after his journey through subspace to defeat Clancy.

Irene is captured by Ashtar and held at the Tower of Lahja. She proves to be a distraction to Ryu which lets Ashtartake advantage of to ambush Ryu. Although Robert manages to save Ryu, Ashtar manages to bring Irene away with him through the Maze of Darkness. When Ryu finally reaches her, it is for naught, as Ashtar maniacally stabs her from behind. Irene survives the blow, and tasks Ryu to destroy an altar. While she is being escorted out by Robert, they are ambushed by the Jaquio. Taken hostage by him, Irene is to be sacrificed as a bait for the demons of the dark world when the Sword of Chaos awakens. However, she is resurrected by the Dragon Sword's magic. 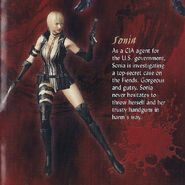 Irene Lew 'Sonia' in Ninja Gaiden 2
Add a photo to this gallery
Retrieved from "https://hero.fandom.com/wiki/Irene_Lew?oldid=2083914"
Community content is available under CC-BY-SA unless otherwise noted.