Iridessa (also nicknamed Dessa) is one of the main characters in the Disney Fairies franchise. She is a Light-talent fairy with an Oceanian-looking appearance and is often the first to voice discomfort about Tinker Bell not wanting to accept her job as a tinker.

She is voiced by actress Raven-Symoné who also played Raven Baxter, and Monique from Kim Possible. In Japanese dub from the movie, she is voiced by Mie Sonozaki.

Iridessa is first seen at Tinker Bell's Arrival, alongside her friends and other Light-talent fairies. They quickly befriend the newcomer Tinker Bell upon her first full day in Pixie Hollow. One day, however, while getting their supply of Pixie Dust, Iridessa, Rosetta, Silvermist, and Fawn are greeted by an excitable Tink who tells her friends that she plans on changing her talent, so she can be able to travel to the Mainland alongside them. Like the rest of her friends, Iridessa is hesitant to follow through with such an idea and is actually the last of Tink's friends to accept the Tink's idea.

After training to become a Water-talent fairy ends in failure, Tink attempts to become a Light-talent fairy. Iridessa attempted to teach her how to catch light and bestow upon lightning bugs. Like the Water-talent fairy training, the Light-talent training ends in disaster. After more failed attempts with Rosetta and Fawn, Tinker Bell finds a lost Music Box and begins to repair it. Unbeknown to her, Iridessa and the others were witnessing the event silently and are proud to see Tinker Bell putting her talent to good use.

Later on, Pixie Hollow is preparing to go off to the Mainland to change the seasons, but the preparations are destroyed by a stampede of sprinting thistles. The damage is so great that Queen Clarion is forced to call off the trip to the Mainland. Tink puts her talent to good use once more and creates an array of inventions capable of restoring the preparations within a few hours.

In the finale, Iridessa and the others are able to go to the mainland on schedule, with Tink tagging along to return the music box.

In the sequel, Iridessa is first seen at the opening, carrying on with her normal duties of changing the seasons on the mainland. Later on, she is seen with Silvermist at Fairy Tale Theater and was apparently spooked by the story that was just told. The next day, Iridessa is taking a flight with Silvermist and Rosetta when Tinker Bell approaches them and asks for extra Pixie Dust. The reason why is unknown to Iridessa and the others, but they have to deny her request as they need all the Pixie Dust they can use for their trips to the Mainland.

Later on, Iridessa is seen making preparations for the Blue Harvest Moon festival. In the end, she is seen with her friends, celebrating Tink's successful duty to bestow Blue Pixie Dust upon Pixie Hollow.

In this film, Iridessa and the other fairies attend a Fairy Camp. When Tinker Bell is captured by the human girl named Lizzie, she joins her friends on their quest to rescue her. At one point, Vidia gets trapped in mud and while Iridessa and the others are trying to pull her out, an oncoming vehicle comes right into their patch, threatening to crush them. Iridessa uses her Light-talent abilities to blind the driver, forcing him stop the truck. When the driver exits the vehicle to see if anyone was around, they grab on to his loose shoelace to get themselves out of the mud. After finding and saving Tink, Iridessa and the others lend their Pixie Dust to Lizzie in order to save Vidia, who was kidnapped by Lizzie's father and taken to London for study. After the rescue, the fairies and humans make peace and are seen together, having a picnic and reading through Lizzie's research journal on fairies.

In the television special, Iridessa represents the Light-talent fairies and takes the position of team captain with Lumina as her team partner. During the teacup challenge, Iridessa sparks too much Pixie Dust on her teacup that both Iridessa, Lumina and the teacup fly on top of the cave, causing them to get eliminated from the competition.

On an ordinary day, Iridessa is carrying on with her normal duties when she heard Tinker Bell broke the fairy laws and crossed The Border over to the Winter Woods and froze her wings. Because of the harsh winter climate, warm fairies aren't allowed to cross The Border that separates the Winter Woods and the rest of Pixie Hollow. Iridessa, Rosetta, and Silvermist meet up with Tinker Bell, Fawn, and Vidia at the doctor where Tink is said to be just fine. After they depart, Tink tells her friends about how her wings sparkled and glowed when she crossed the border.

Like the others, Iridessa believes it was just the light from the sun, but Tink feels the Winter Woods was calling her. Later that night, Clank gathers Iridessa and the others, who learn that Tinker Bell crossed the border again and met her sister Periwinkle, a Frost-talent fairy. Tink plans on creating a snow making machine that will allow Peri to get a tour of Pixie Hollow. Iridessa helps out and the following day, Periwinkle is taken on a breathtaking tour. Iridessa shows Periwinkle her ability to create rainbows, which puts Peri into awe.

However, the hot climate begins to destroy Periwinkle's wings, forcing the Frost-talent fairy to return home. Queen Clarion and Lord Milori, the ruler of the Winter Woods, force Tink and Peri to never see each other again. The next day, the snow maker machine goes out of control, so Iridessa and the other evacuate the fairies and animals to the warmth of shelters. Periwinkle and the frost fairies are able to save the Pixie Dust Tree by preserving it however, thus saving Pixie Hollow and the Winter Woods. Finally, Queen Clarion and Lord Milori allow Tinker Bell and Periwinkle to see each other, as well as allowing warm fairies to cross The Border.

Iridessa is set to appear in the upcoming Tinker Bell's film where she and her friends magically swap talents. Iridessa becomes a Garden-talent fairy.

The Legend of the NeverBeast 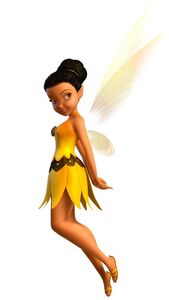 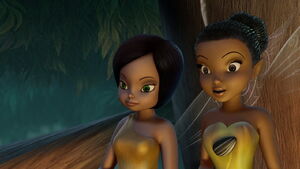 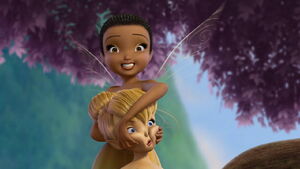 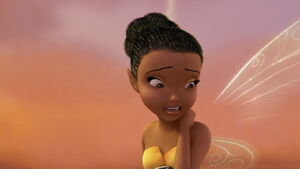 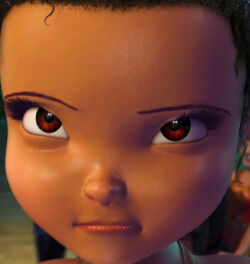 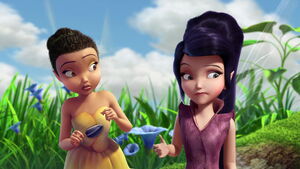 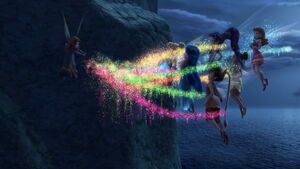 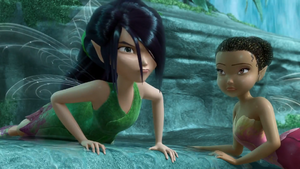 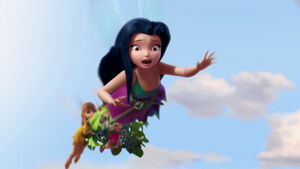 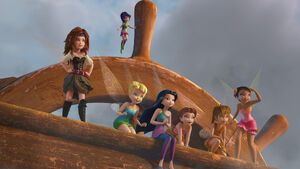 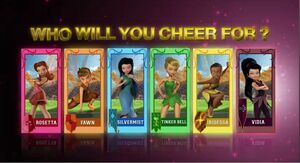 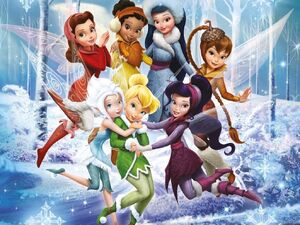