Eye in the Sky

Member of Team Flash (in secret)

Blogging
Being with her husband, friends, and family

Find any and all dangerous meta-humans that pose a threat to Central City (currently).

Journalist
Iris West-Allen is the deuteragonist in the CW's 2014 TV series, The Flash. She is the co-leader of Team Flash, a former journalist of Central City Picture News, a former waitress at CC Jitters, a psychology graduate student, and the owner/editor of The Central City Citizen. Iris is also the daughter of Joe West and the late Francine West, the older sister of Wally West, the older paternal half-sister of Jenna West, the fiancée of the late Eddie Thawne, the wife of Barry Allen, and the mother of her future daughter, Nora West-Allen.

Iris is portrayed by Candice Patton.

Iris wants nothing more than to help for those around her. She's highly intuitive and has an innate curiosity, being amazed and intrigued by the fantastical events that are happening in Central City, particularly the Flash. After becoming a reporter under Mason Bridge, she becomes even more so in investigating the mysterious circumstances surrounding Harrison Wells and S.T.A.R. Labs. Iris is more stubborn than her father and holds true to her morals, despite what others may want of her. She isn't afraid to take risks and or jump into action when need be, as shown when she helped take down Tony Woodward and William Tockman. Her ability to gather and analyze evidence and come to accurate conclusions is also noteworthy.

When Iris finally figures out that Barry is the Flash - and finds out Barry, Joe and Eddie - people she's explicitly trusted all kept it from her, she feels immensely betrayed and disappointed. However, soon after she came to overcome her feelings of betrayal and proved her worth to the team and reconciled with her father since he pushed for her to be kept in the dark after Grodd's attack.

Iris has shown to care about Barry a great deal since they were kids, having thought of him as a brother figure, unaware Barry has actually been in love with her since childhood. As such she can be seen as a little oblivious in regards to Barry's feelings for her until he confessed he loves her. Despite being in a committed relationship with Eddie Thawne, Iris showed slight jealousy when Barry started going out with Linda Park. This suggests, and later confirmed, that she is unaware of her own romantic feelings for Barry. Eventually in the wake of Mark Mardon's impending tsunami threat Iris, fear about they were about to die, finally realized her romantic feelings and she and Barry shared their first kiss. However, since Barry inadvertently erased those events she remains unaware of these feelings deep down.

After discovering that Barry is the Flash (though technically for the second time) Iris begins to realize her romantic feelings for the latter.

Upon reuniting with her long-lost mother, Francine, and learning of the existence of her brother, Wally, Iris felt betrayed and angered that her mother kept Wally out of her and Joe's lives, and initially wanted nothing to do with her, although her anger towards Francine was justified, but not her behavior, as Iris unfairly treated her mother badly; even after the latter explained why she left; was to turn a life around, as she was a drug addict at the time. However, she didn't hold any ill will against her father for not telling her Francine was alive, understanding he was trying to protect her from feeling abandoned. Iris was eventually able to forgive her mother on the latter's deathbed.

After Barry Allen reluctantly allowed Eobard Thawne to kill his mother, Nora Allen, in order to undo the damage caused when he created Flashpoint, Iris wasn't on speaking terms with her father, Joe, because of his lie about her mother. Upon learning the truth about Barry's time-traveling actions though, Iris eventually made amends with Joe.

Iris is a very devoted and protective older sister to her brother, Wally West.

Unlike her father, Iris doesn't apologize or admit when she is wrong. The only time was when after her trip to the future, she told her husband Barry that he was right about Thawne manipulating their daughter Nora.

Iris still hasn't learned that she can't talk Barry out of anything once his mind is made up about something throughout the entire series, despite Barry's bad experiences with Eobard Thawne and Hunter Zolomon respectively, Iris and everybody in Team Flash (except Barry) is still fooled by an individual's ability to appear kind-natured, Iris didn't suspect that Clifford DeVoe was a meta-human (even after the Council of Wells informed Team Flash that the latter was the mastermind behind the bus meta-humans) despite the fact that he did not have a criminal record, Iris's concern increased when Barry's suspicions of Clifford increased when he and his wife Marlize lied to his superior officer David Singh, claiming that he was harassing Clifford (when in truth, he was only conducting the necessary investigation) when Iris tried to persuade Barry to let it go, he refused, even when every member of Team Flash (including Iris) believed he was innocent - Barry's suspicions were proven to be correct yet again; regarding Clifford. Then when Nora revealed that she's been working with Thawne to stop Cicada, she stubbornly refused to see the danger of working with him (despite the past numerous times that Thawne has used and manipulated everyone on Team Flash and murdered Barry's mother).

Once getting together with and eventually marrying Barry, Iris provides both tactical and emotional support to him regarding the latter's duties as the Flash. When Cisco and Caitlin grew alienated from Barry for a time due to the repercussions of Flashpoint, Iris stood by his side. She didn't hold Barry responsible, understanding that he didn't mean to cause so much damage to the timeline and actively tried to help him take down Savitar, Iris is also fiercely protective of her husband, as seen when Clifford and Marlize DeVoe framed Barry for Clifford's murder, she confronted Marlize about destroying their lives and threatened retribution. Iris was also unwilling to trust Marlize to help them prevent the Enlightenment until seeing firsthand how Marlize regretted her actions. 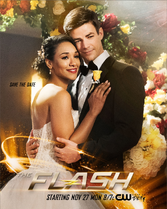 Retrieved from "https://hero.fandom.com/wiki/Iris_West-Allen?oldid=1885624"
Community content is available under CC-BY-SA unless otherwise noted.