Iroh (The Legend of Korra)

Iroh (or in easier terms Iroh II) is a supporting protagonist in the Nickelodeon cartoon series The Legend of Korra. He is the commander of an army called the United Forces of his First Division as well being the the grandson of Zuko from the original series Avatar: The Last Airbender. He is also the prince of the Fire Nation and being a royal blood member of the Royal Fire Nation Family.

He is voiced by Dante Basco, who previously voiced Iroh's grandfather Zuko in his youth from Avatar: The Last Airbender.

Iroh is a highly trained firebender and can hold his own in combat. In the Equalist/Air saga he took down many Equalist airships armed or not even destroying their weapons, He can also fly in the air via his firebending like his relatives Azula and Ozai. An another sub-ability is lightning bending. Unlike his grandfather Zuko (who can only redirect lightning) Iroh can also create and shoot lightning like his namesake relative Iroh from the original series Avatar the Last Airbender. 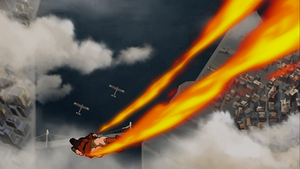 Iroh propelling himself with firebending. 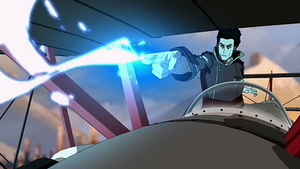 Iroh firing a bolt of lightning.