Save Rockwell from the nuclear missile (both succeeded)

The Iron Giant is the titular main protagonist of the 1999 animated film of the same name and appeared to have a cameo in the 2018 film Ready Player One.

He is a genial 50-foot tall autonomous robot from another world that crash lands on Earth before becoming friends with a young boy named Hogarth who rescues him from his own internal defensive mechanism.

The Iron Giant is a large 50 foot robot of alien origin, and the main protagonist of the film of the same name, adapted from the original novel by Ted Hughes, The Iron Man. Though built as a weapon, the Giant's crash landing on Earth reset his programming, leaving him with a childlike sense of wonder.

The dent on his head is an indicator of this. The Giant is well-armed but will only use his weapons in self-defense, is capable of flight and can also repair himself via a homing beacon in his head.

The Iron Giant has eyes that glow and can change to red when threatened or angry and parts that transform and reassemble. He is also indestructible to virtually anything. The Iron Giant's diet consists only of metal.

In 1957, the Giant came to Earth and crash-landed off the coast of Rockwell, Maine. After terrifying a fisherman by the name of Earl Stutz who called the government upon his return to land, the Giant wandered into the town's nearby woodlands after eating a few vehicles and set his sights upon devouring a power station.

He would have been shocked to death had nine year old Hogarth Hughes not been searching for the culprit who ate their TV antenna and shut the power down. The Giant continued to eat local pieces of machinery and later re-encountered Hogarth, befriends him and then proceeds to follow him home.

The Giant was seen by one of the train's engineers Frank Thomas after the train hit the Iron Giant who was trying to fix the railroad tracks that he was trying to eat earlier. This led to him being hunted down by an obsessive and paranoid federal government agent Kent Mansley, after following the train engineers's suggestion on where to find a phone.

Kent leaves only to figure out that the BB gun that he was in possession of was Hogarths since Hog Hug was the only thing left of Hogarth's name on the gun. To try to get Hogarth to tell Kent about the whereabouts of the Giant, Kent rented the room that was for rent at the Hughes's residence.

Slowly, the Giant began to learn, through Hogarth's teachings, how to speak, about right and wrong, life and death, and some elements of culture, specifically Superman who Hogarth thought the Giant could relate to since Superman also crash landed on Earth and had to learn everything.

After relocating the Giant to a Junkyard owned by beatnik artist Dean McCoppin, Hogarth spent much of his days having fun with the Giant while keeping his existence a secret. Nevertheless, Mansley called the army and General Rogard after interrogating Hogarth into revealing the Giant's whereabouts, but Hogarth and Dean were quickly able to disguise the Giant as another one of Dean's art projects.

A short time after, the Giant's automatic defense mechanisms activated when Hogarth pointed a toy gun at him pretending he was the evil robot Atomo and Hogarth was almost killed by the Giant's eye beams. The Giant didn't seem to understand what he was doing.

Dean was quick to dismiss the Giant, calling him 'a big gun' and ignoring the Giant's stammered protests of 'No, I not gun.' After Hogarth left in pursuit, Dean noticed Hogarth's gun, realized why the Giant had attacked, and went to help.

Unfortunately, Mansley spotted the Giant rescuing two boys in danger and ordered that the army attack immediately. The Giant and Hogarth fled, resorting to flight after falling off a cliff, but in one of the attacks Hogarth was knocked unconscious after the Giant was hit by a jet.

The Giant thought Hogarth was dead since Hogarth wasn't moving or responding and the Giant was distraught. When the army fired again, the Giant snapped, activating as many weapons as possible, seeming to relinquish his gentle nature and firing upon the army.

The only available option was to fire a nuclear missile from the USS Nautilus (SSN-571), according to Rogard and Mansley. Before it could be fired, Hogarth recovered and confronted the Giant.

The Giant recognized his friend and returned to normal after Hogarth told the Giant that he didn't have to be a gun, and instead that he had to choose. After Dean tells Rogard that the Giant is not a killer and only acts defensive when seeing a gun as Rogard orders his men to hold their fire and is about to abort the missile launch, Mansley ordered that the missile be fired anyway after still believing that the Giant is a threat, ignoring the fact that it was targeted on the Giant and thus everyone in Rockwell would be killed. This prompts Mansley to escape Rockwell in order to save himself, only to be stopped by the Giant and allowing Rogard and his soldiers to arrest Kent for his treachery.

Hogarth explained to the Giant that when the missle hit, everyone was going to die. A saddened Giant looked upon the missile and made his decision by saying "I fix."

After telling Hogarth 'you stay, I go, no following', mirroring one of the first things Hogarth said to him, he took off into space, heading straight for the missile. Bracing himself for impact, Hogarth's words of 'you are who you choose to be' rang though the Giant's head, and he said his decision to himself before the crash: 'Superman.'

Some time later, Dean had built a statue in the Giant's memory, which was erected in town, and Hogarth received a package from General Rogard which was the jaw bolt from the Giant, the only part the army could find. That night however, the bolt began tapping against the window as though trying to get out.

Remembering that the Giant was self-repairing, Hogarth let it go free, saying 'see you later.' The Giant's parts were converging upon a glacier in Iceland, where the Giant's head, still active and smiling, is waiting to rebuild itself again and possibly return to Rockwell to see Hogarth and everyone else once more.

The Iron Giant appeared to be an extremely technologically sophisticated alien robot designed with flight and weapons tools. Using a pair of rocket boosters on his feet, he is able to fly at will, and could fly high enough to almost reach outer space when he pursued the nuclear missile which would have destroyed Rockwell. His body parts can also move autonomously, with the help of an antenna which would signal them to re-join and rebuild the Giant if he is damaged or destroyed.

He is also extremely durable, though was brought down numerous times, such as being electrocuted by a power station, knocked out by a train, and temporarily incapacitated by aircraft missiles. He was broken to several pieces by a nuclear missile, though he used his self-repairing antenna to rebuild, which is one of his most potent tools. However, he appears to be far more durable while in combat mode, as seen when a 16-inch Iowa-class battleship shell delivers no apparent damage to him.

Although he chose to resolve conflict through peaceful means, the Giant was armed with a highly destructive weapons arsenal which would trigger whenever he was threatened. The Giant would appear to loose self-awareness in this state, and aim to kill or destroy whatever was targeting it, even his friend, Hogarth.

Despite being vastly mechanically powerful, the Giant was not without flaw, mainly due to the fact that his peaceful and combat mode seemed to be two entirely separate entities. He was not able to control himself while threatened and preparing for battle, and his sole instinct while in this state seemed to be to simply destroy everything in his path. Thus, it can be assumed that the Giant could not be relied upon for defensive battle purposes, as his nature while using his weaponry was only to destroy. Had he been able to use his weapons whilst being self-aware, it may be speculated that he could have even destroy the nuclear missile using one of his many weapons from a large distance. 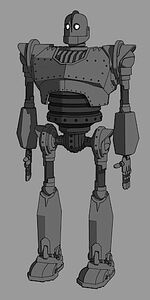 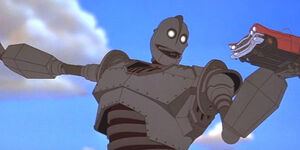 The Iron Giant holding up Hogarth

Dean yelling at the Giant for nearly disintegrating Hogarth which the Giant didn't mean to do. 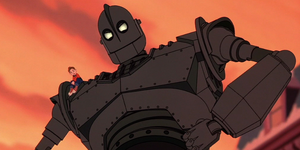 Hogarth and the Giant stopping Mansley from escaping 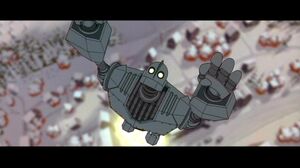 The Giant sacrificing himself to save Rockwell from the missile. 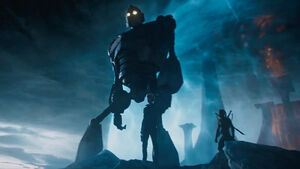 The Iron Giant appears in Ready Player One.
Add a photo to this gallery

Retrieved from "https://hero.fandom.com/wiki/Iron_Giant?oldid=1805256"
Community content is available under CC-BY-SA unless otherwise noted.