Guardian of the Village

Protector of the Player

Roaming around the village

Protect the player and the villagers from the antagonistic hostile mobs

The Iron Golems are major protagonists from the game Minecraft. They are a very, very powerful mob in the game. They protect the villagers and players from hostile mobs. They have 50 hearts total. Despite being a heroic guardian to all the villagers, there are some situations that they mostly fail to protect the from an illager raid, or a zombie sige, which annoyed most players. They were added way back in update 1.2 last 2012, and were considered as much more effective bodyguards to villagers and players ever since.

However, while some golems can be heroic in certain scenarios, they can also be antagonistic in some situations also, whereas neutral iron golems will indirectly become one of the game's main antagonists (depending on the player's perspective) when the golem unleashed its bad side to most players, that makes them even more dangerous to most players that mistakenly hit them, even by accident or on purpose, and they will not hesitate to kill the player who hits them, showing deep hatred for the player sometimes.

Iron golems will become aggressive against any nearby hostile or neutral mob other than creepers or wolves. They will attack anything that attacks themselves or a villager, except a player if the iron golem is player-made. A golem will only stop acting aggressively if they defeat a player or mob who attacked them, or if all players leave the game. If the village is near a large pool of water or the ocean and an iron golem unknowingly goes in the water, it will stay in the water until it dies or is somehow forced to escape it. They may give baby villagers a poppy.

The Iron Golem is a very tall Minecraft mob. Like the name says their bodies are made out of iron, there are also some peculiar vines with yellow flowers around their bodies, though it can also be wires. Their faces are similiar to the Villagers' faces. Their eyes are red and black.

They will help the players or the villagers fight the hostile mobs and protect them from danger. Once the Iron Golem helps defeat the hostile mobs, the mobs will retreat and despawn since they are all outnumbered. It possess a great strength and can attack entities with only 2-3 punches. Once the Iron Golem is created by the player, The Iron Golem will be respectful to their owners, but if they will spawn naturally, they will be neutral amongst the players. Iron Golems are also useful in raids, as their strength will cause a lot of damage on the illagers or can kill them with 2-3 punches. If all iron golems or villagers are defeated in the raid, the illagers will be victorious, but if one or more iron golems or villagers survive, the illagers are mostly defeated and the player will win the raid. They are also useful in fighting the Wither boss, as their strength will also help the player defeat the boss much more easily. Iron golems are also entirely useful within the Ender Dragon battle, as they will distract all the endermen from killing and chasing the player, thus making the player so easy to target the Ender Dragon. They are friendly to all innocent beings in the game, except the hostile mobs, or those who provokes and harm them. Iron golems can be useful companions throughout the gameplay, and played an important role in the player's adventure.

Iron Golems are made by placing iron blocks in a form of T and then putting a pumpkin or a jack-o-lantern in the top. 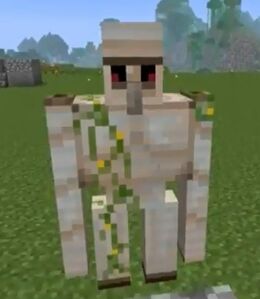