Iron Patriot is an alias used by several characters in the Marvel Universe. The alias is an amalgam of Iron Man's armor and Captain America's patriotism.

Looking for a symbol to rally America behind him after becoming a hero during the Secret Invasion, Norman Osborn(better known as the Green Goblin) developed his Iron Patriot persona using Tony Stark's arsenal flag-patterned with Steve Rogers' colors until his dismissal during the Siege of Asgard in Oklahoma. Later, the Iron Patriot mantle was taken over by a true hero: James Rhodes, a.k.a. War Machine. And after him, by Dr. Toni Ho.

The Iron Patriot Armor strongly resembles the Iron Man Armor MK L but has American flag colors, different weapons and uses a palladium power core instead of an Arc Reactor. 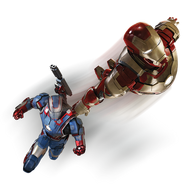 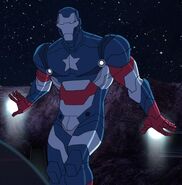