Fighting the Decepticons and protecting humans

Protect the world from the Decepticons. (First Film)
Make Optimus Prime become alive with The Matrix of Leadership and kill the Fallen. (Second Film) (Both Succeeded)
Protect Sentinel Prime in the NEST headquarters (Succeeded for a while) and survive. (Failed) (Third Film)

Ironhide was among the Autobots fending off a wave of Decepticons led by Shockwave and Soundwave and was eventually ordered to retreat by Optimus Prime. Tasked with finding other Autobots scattered throughout the galaxy and rendezvous on Earth, they left Cybertron in various escape pods.

Responding to Bumblebee's call for assistance, Ironhide and the other Autobots under Optimus Prime's direct command came to Earth, with the old soldier landing in a suburban pool. As he climbed out of the water, a little human girl asked him if he was (of all things) the tooth fairy before he quickly hid behind some trees when the child's parents exited the house. He scanned their GMC Topkick truck and transformed, leaving the residence. He linked up with Jazz and Ratchet, and they proceeded to the rendezvous point, where they met up with Optimus and Bumblebee. After meeting Sam Witwicky and Mikaela Banes, Ironhide displayed an eagerness to show off his cannons and made a classic Clint Eastwood impression to show it by saying "You feeling lucky, punk?"(which earned him an instant reproof from Optimus).

Going to the Witwicky residence, Ironhide had lubricant released upon him by a rodent. This unpleasant situation was made worse by Sam Witwicky's frantic refusal to let him shoot it. Ironhide relented, despite the fact that it would cause rust. He also suggested shooting the parents, as they were interfering with Sam's search for Captain Witwicky's glasses. Optimus reminded him that they don't hurt humans and scolded his weapons expert, to which Ironhide meekly responded that he merely thought it should remain an option. After Sam, Mikaela and his parents were captured by Sector Seven, Ironhide got a real good chance to show off his cannons when he and the other Autobots totally outclassed the S7 agents by instantly disarming them of their weapons, then rescuing the boy and his girl. Unfortunately, their escape was to be short-lived, as Bumblebee was captured by the mysterious agents after saving Sam and Mikaela's lives. The next morning, when Optimus Prime was pondering their next move, Ironhide asked why they had to save the humans, prompting Prime to go into one of his long speeches about freedom and sacrifice, concluding that the humans need to pay for the mistakes of Cybertron-kind and if they needed to be, he would destroy the AllSpark by fusing it with his own spark. Inspired by his words, Ironhide debated no further, and the Autobots set out for the location of the AllSpark, Hoover Dam. Halfway there, to their surprise, they saw Bumblebee leading a column of Sector Seven assault vehicles, so Ironhide and the rest of the Autobots joined the unit.

During the final battle at Mission City, Ironhide realized that the F22 Raptor that appeared to be providing Captain Lennox's troops with air cover was in fact his former comrade Starscream. Ordering the others to take cover, Ironhide and Bumblebee lifted a discarded truck full of Furby toys to protect the humans against Starscream's strafing run. It worked, but the explosion threw Ironhide back and crippled Bumblebee. Soon afterwards, Devastator attacked, forcing Ironhide to do several somersaults to avoid the Decepticon's missiles, thus totally scaring the crap out of a lady sitting in the middle of the street.

Ironhide and Ratchet took it upon themselves to protect Sam from Starscream and Blackout as he made his way to a rooftop where he could pass the AllSpark to a military helicopter. Unfortunately, Starscream blocked off Sam's path, prompting the Autobot guardians to engage the more powerful Decepticon immediately. After taking several missiles in the gut, Ironhide implored Sam to keep running. After the destruction of Megatron and the AllSpark, Ironhide cradled the body of the fallen Jazz and somberly informed Optimus Prime that there was nothing they could do. Ironhide then gave Captain Lennox a ride home and spent the remainder of the day observing Sam and Mikaela making out on the hood of Bumblebee's vehicle mode.

Ironhide acted as an Autobot support unit in Shanghai as NEST hunted for Decepticons. When Major Lennox told him that they had echoes of energy readings, Ironhide assumed robot mode and confirmed that their target was nearby, saying he could smell him. Unfortunately, the Decepticon in question turned out to be Demolishor. Ironhide chased after the massive Decepticon as it roared through the streets before Optimus Prime was deployed from the air and attacked Demolishor, allowing Ironhide to jump on his structure and shoot out his massive wheel, sending him crashing into a warehouse. Ironhide stood with his commander as Optimus prepared to deliver the killing blow, listening to Demolishor's warning about The Fallen's return before he died. Ironhide returned to base, resting in his alternate mode in his hangar while Optimus conferred with William Lennox, General Morshower and Theodore Galloway. Later, Ironhide accompanied the Autobots to rescue Sam Witwicky from Megatron and Starscream, but was too late, for the revived Decepticon leader had killed Optimus in combat. When Ironhide returned to an American air base with Optimus' body, he was surrounded by military forces under Galloway, who had managed to secure NEST's deactivation following multiple Decepticon attacks around the planet. Furious that the humans dared to point a weapon at him, Ironhide almost lost his temper, but Lennox convinced him to not turn on the non-NEST soldiers. Ratchet recommended leaving Earth, but Ironhide argued he believed Optimus would not want them to abandon the humans, apparently becoming leader of the Autobots in the process.

Ironhide was to retreat with the other Autobots to Diego Garcia until Lennox received a message from Witwicky and his friends to come to Egypt, having figured out the Decepticons' scheme. Lennox managed to trick Galloway into jumping out of the plane carrying the soldiers and Prime's body, while the rest of the Autobots in the second plane quickly cut through the nets containing them. Ironhide then advised the crew to open the doors and let him out of the plane. NEST parachuted into a small village near the Pyramids, but soon lost communication when Starscream released an EMP blast at them. During the defensive operations of NEST's position, Lennox decided to send a team to locate Sam, and Ironhide and Arcee immediately announced that they would lead the team. Transforming to vehicle mode, Ironhide rolled out with a number of soldiers and Arcee. After finding the humans, they were ambushed by several Decepticons, with both Arcee and Ironhide hit numerous times while providing cover fire for their friends, and told Sam and Mikaela to run while they drew their fire. Ironhide survived, albeit heavily damaged, and had to run for his life (ejecting his weapons in the process) when a United States Air Force B-1B Lancer bomber arrived delivering 2000-pound JDAM bombs, obliterating the remaining the Decepticon troops in the area. Momentarily safe, Ironhide and the others witnessed Sam resurrect Optimus Prime with the Matrix of Leadership, and his leader's subsequent defeat of The Fallen.

In the years since the defeat of The Fallen in Egypt, and with their human allies closely watching for signs of Decepticon activity, the Autobots have now dedicated themselves to resolving human conflicts, fearing that rogue elements of humanity might spark the sort of global conflicts that devastated Cybertron. Shortly after returning to the NEST facility from an unspecified mission, Ironhide was inspecting a new weapon that Que had created when NSA Director Charlotte Mearing arrived to speak with Optimus Prime. However, Ironhide and Dino let the human know that the Autobot leader was in a foul mood, believing that the US government had lied to the Autobots about disclosing all of their knowledge about the Cybertronians, given the discovery of an engine fuel cell from the long-lost Ark at Chernobyl. Mearing professed that she had not had clearance to this information until now, and introduced the Autobots to NASA administrators and famed Apollo 11 astronaut Buzz Aldrin, who explained the truth about their mission to the Moon was to explore the wreck of the Ark, and how they suspected that the Soviet Union had been trying to generate fissionable power with the fuel cell.

After Sentinel Prime had been rescued from the wreck of the Ark and brought back to Earth, Ironhide rushed into the chamber where he had been reactivated by the Matrix of Leadership after hearing of a commotion. After Sentinel realized that he was among friends, Ironhide witnessed him explain how his pillars were key to activating his space bridge, a teleportation device that was crucial to the Autobot war effort. Soon, the human boy Sam Witwicky discovered that the Decepticons had stolen hundreds of pillars from the Ark decades earlier, and were now after Sentinel Prime and his control pillar to utilize the space bridge. As Sentinel, Bumblebee, Sideswipe and Mirage neared the NEST base, Ironhide moved out to intercept their Decepticon pursuers called the Dreads. After colliding head on with Crankcase and Crowbar, Ironhide and Sideswipe forced the Decepticons to drop their weapons after an intense "Mexican Standoff". However, they deployed explosive spears, managing to hit Ironhide in the shoulder with one before recommencing their attack. The veteran Autobot caught a blaster tossed by Sideswipe and used it to shoot Crowbar in the face, before pulling the spear out of his shoulder, impaling it into Crankcase's face, slamming the Decepticon into an abandoned car and kicking the wreckage into a nearby auto shop, which exploded.

Arriving at the NEST base, Ironhide assured Sam and Colonel Lennox that he would protect Sentinel Prime from the Decepticons. However, the former Autobot leader had other ideas, explaining that he knew that they would never win the war, and to save Cybertron from destruction, a deal was made with Megatron. Before anybody could react, Sentinel shot Ironhide in the back with his hidden cosmic rust cannon. Succumbing to the effects of the rust, Ironhide demanded to know what Sentinel had done, but the Prime callously stated that he was merely "discharging" the soldier from duty and dealt the finishing blow. As the traitor disappeared into the NEST base to retrieve the pillars, Ironhide died as he crumbled into rust.

Ironhide is mentioned as Attinger shows a card with his picture having a red X on it.

Ironhide and Ratchet saves an dying Jazz from getting ripped in half by Megatron. 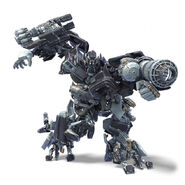 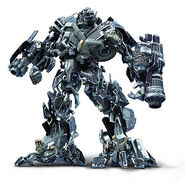 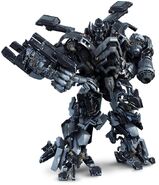 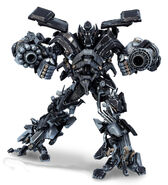 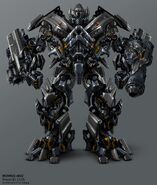 Ironhide and Sideswipe vs. Crankcase and Crowbar 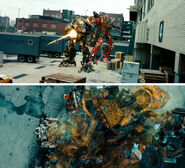 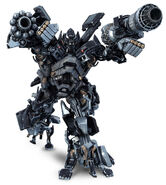 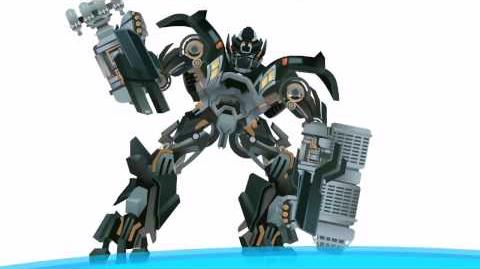