Assist the Toa Hagah in retrieving the Kanohi Avokhii from the Brotherhood of Makuta, help the Toa Hordika and the other Rahaga on searching for Keetongu, defeat the Visorak horde (all succeeded), Find Makuta Teridax and defeat him (partially succeeded)

Former servant of the villain

Iruini was one of the protagonists that appeared in the BIONICLE series and also as one of the supporting protagonists in the 2005 storyline. He is also a member of the Toa Hagah, who originally worked for the Brotherhood of Makuta until they discovered their treachery and turned on them in order to protect the Matoran from them.

He was voiced by Trevor Devall, who also voiced as Nuju in the animated series.

Not much was known of Iruini's past before he became the Toa Hagah, but it was revealed that he was an active Toa for a lengthy period of time. When the Brotherhood of Makuta decided that they needed the Toa bodyguards, Iruini was selected as a representative Toa of Air. He was then endowed with metallic armor to indicate his status as an elite Toa and his teammates presented him with the Kanohi Kualsi as the badge of honor.

During one mission with Norik; the leader of the Toa Hagah, they encountered a number of Frostelus and they bested the creatures by combining their Rhotuka powers to make a lava cyclone, which knocked the creatures out.

After quite sometimes, Iruini eventually quit the team when he believed that they had wasted time on large threats and not enough time on ever-present dangers. But when the Toa Hagah eventually discovered that the Brotherhood became corrupted and started to oppress the Matoran they had swore to protect, Iruini have no choice but to ally with his teammates once more in order to raid Destral and steal the Kanohi Avohkii from the Brotherhood.

Later that night, Iruini and the other four Toa Hagah came out from their hiding places after Norik took down all the guards. Then, they proceed to sneak into the Brotherhood's fortress as they took down several Rahkshi and Exo-Toa along the way. Eventually, they reached towards the fortress but were alerted by the arrival of the Makuta warriors and Nidhiki and Krekka, two members of the Dark Hunters. While the other four fought with their enemies to allow Norik and Iruini to enter into the fortress, the pairs entered into the room when the Avohkii was but were then ambushed by Teridax, who engaged them into the fight.

Iruini was one of the few Toa of Air who didn't use chutepeak. As the Toa Hagh, he once believed that the team needed to spend more time on smaller dangers, such as Rahi invasions. His teammates did not share this view and the differences of their opinions lead him to quit. However despite that, he deeply cares for his team as for example; he pushed Norik out of the way to be hit by Roodaka's mutation power. He was also known to be the one of the most cynical members of the team.

Upon becoming a Rahaga, Iruini quickly resigned himself to the mutation and did not accept that Keetongu had the power to cure him, though he eventually changed back into the Toa Hagah again. He was eventually overjoyed to become a Toa again, adopting an adventurous personality.

Iruini in the set form. 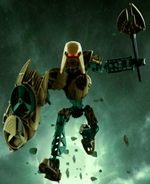 Iruini fighting with the Brotherhood of Makuta in the comics. 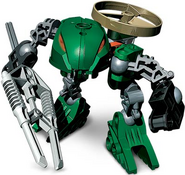 Rahaga Iruini in the set form. 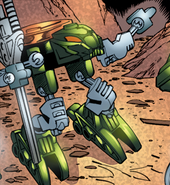 Rahaga Iruini in the comics. 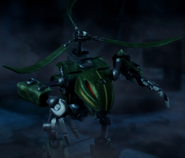 Rahaga Iruini in the animated series.

Add a photo to this gallery
Retrieved from "https://hero.fandom.com/wiki/Iruini?oldid=1765286"
Community content is available under CC-BY-SA unless otherwise noted.