Eating Ramen
Getting along with Naruto

Iruka Umino is a pivotal protagonist in the Naruto series. He is a chūnin-level shinobi of Konohagakure who serves primarily as an instructor at the Academy. Later, he was promoted principal of the Academy.

Iruka is a man of average height and build. He has black hair (brown in the anime) that he keeps in a ponytail, dark eyes and a scar that runs across the bridge of his nose — which he has had since his youth. He wears the standard Konoha shinobi outfit complete with forehead protector, sandals, and flak jacket. His sleeves are also rolled up about ¼ way. As a child he wore a simple outfit along with mesh-armour underneath it.

During his childhood, Iruka's parents were killed by the Nine Tails. After his parents died, Iruka has similarity as Naruto Uzumaki does. He became an orphan and had no one to acknowledge him. He became a prankster who pulled pranks and being an idiot. When Naruto attend to the Academy, the Third Hokage assigned him to become Naruto's homeroom teacher. When Naruto failed to graduate, His childhood "friend" Mizuki tricked him and Naruto as well revealed the secret to never tell Naruto as the Nine Tails' Jinchuuriki until he beaten up Mizuki with his mastered Shadow Clone Jutsu causing Iruka to allow him to graduate and return the Konoha as well arrest Mizuki when he went rogue. He later became the homeroom teacher for Konohamaru Sarutobi, Moegi Kazamatsuri and Udon Ise. After the Third Hokage died, he attend his funeral and explained Naruto why people risk their lives to protect the other people. After three years, Iruka continue become the homeroom teacher for new student after Konohamaru and his classmate graduated. After the Fourth Great Shinobi War, Iruka was assigned by Kakashi as Naruto's Jonin teacher for 2 years since he didn't took the Chuunin Exams. Years later, Iruka was given the advanced exam for his promotion as the vice-principal of the Academy and assigned Shino Aburame to become the next instructor after him. After 12 years, Iruka became the principal of the Academy. 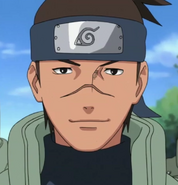 Iruka in The Last: Naruto the Movie 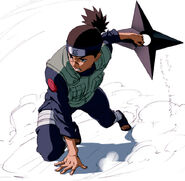 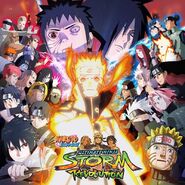