The Grim Adventures of Billy and Mandy

Trying to win Mandy
Hanging out with Billy
Going on adventures with Billy, Mandy, and Grim

Be with Mandy (ongoing, but always fails in all episodes)

Unlike Mandy and Billy, who show no fear for the frightening, supernatural and magical beings and settings around them when using Grim's magic to venture into the underworld, Irwin has displayed more signs of cowardice in such situations and seems to be more easily terrified than his friends when he accompanies them on such trips. Because of being related to such strange monsters (as his mother is a mummy and his paternal grandfather is the Dracula), Irwin has been shown to possess superpowers which he displayed in the movie, Underfist.

He is voiced by Vanessa Marshall, who also portrayed Hera Syndulla in Star Wars Rebels and Black Canary in Young Justice, Injustice 2, and Lego DC Villains. 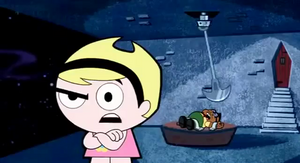 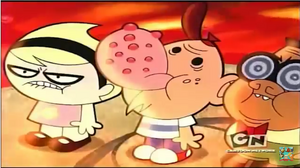 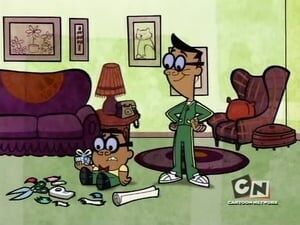 Retrieved from "https://hero.fandom.com/wiki/Irwin_(Billy_%26_Mandy)?oldid=2145295"
Community content is available under CC-BY-SA unless otherwise noted.