Isa is a supporting protagonist in the Minecraft: Story Mode series, being the secondary antagonist-turned-supporting protagonist of the 5th episode of Season 1, Order Up!. She runs Sky City who made a law against building, but for the sake of the greater good.She also gave allowances of specific items on certain days, which were the only days they could get those items.In one part of the episode, she reveals that she thinks there is void below, which is why she didn't allow unauthorized building, and also why you could only get certain items on their allowance days.

She is voiced by Melissa Hutchinson.

Isa has black hair and green eyes. She wears a yellow and black gown with a white rope belt and a platinum gold circlet with an orange gem.

While it may seem that Isa is evil at first since she made a law against building, she really isn't, as she likely only made that law to protect her people from falling off of Sky City into the Void, which she believed was the only place below Sky City despite not knowing there was land. This makes her a misguided individual at first, but soon realizes that she was wrong. 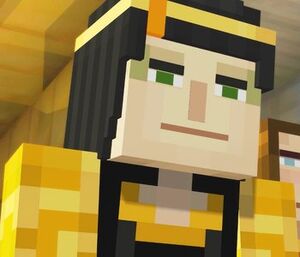