Traveling with his group

Stop the four elemental lighthouses from being lit (formerly)

Swordsman
The Chosen One 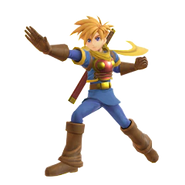