The Binding of Isaac

Kill any monsters he come across.
Escape the basement.
Get revenge on his mother.

Variety of monsters, demons and angels

Isaac is the main protagonist of the game The Binding Of Isaac. He's the son of the christian Mother, who's the main villain of the game. Appearing as the titular character, he is the most balanced one out of all six in the game. Issac is known for having a rather tough life. Isaac tends to be on his own, due to him being constantly bullied by other kids.

Isaac is a little boy who flees into the basement of his house to escape from a mother who wants to kill him, and must fight for his life against a never-ending assortment of demons and mutants. Beating the game in certain ways or collecting certain items unlocks variations of Isaac with their own unique attributes.

His design is a tan humanoid character who has eyes that resemble those of a Sprixie from the Super Mario franchise.

Isaac tends to cry a lot, but he is able to turn his tears into actual damaging bullets in order to attack, enabling him to slay any monster that dares to cross his path. He can also use certain items to power up his abilities. 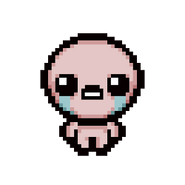 Retrieved from "https://hero.fandom.com/wiki/Isaac_(The_Binding_Of_Isaac)?oldid=1951175"
Community content is available under CC-BY-SA unless otherwise noted.