Isabelle is one of the main protagonists in the 2010 movie Predators, played by Alice Braga. She is an Israeli soldier who is among the many humans brought to the alien world to be hunted by the Predators for sport. It is revealed that she read the report of the original Predator incident as told by it's only survivor and therefore knows before the others what they are in for. It is also revealed that her spotter was killed in action, for which she blames herself. Throughout the film she shows herself to be the group's moral center, being by far their most noble member and also the one who most vocally and consistently condemns Royce's blatantly callous and selfish behavior. In the end though she is also the only member of the group Royce shows any real kindness towards and the two end the film as the only survivors, still trying to find a way off of the planet. 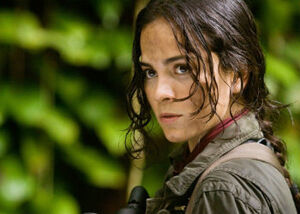