Uncover the secrets behind the Daybreak incident.
Stop a possible HumaGear uprising by destroying all HumaGears

Isamu Fuwa is the former squad captain of A.I.M.S. and one of the tritagonists of Kamen Rider Zero-One (alongside Yua Yaiba), being the secondary Rider of the series. He has the power to transform into Kamen Rider Vulcan.

He is portrayed by Ryutaro Okada.

When Isamu was young, he bore witness to the Daybreak Town incident, in which thousands of HumaGears were hacked by MetsubouJinrai.NET and made to go rogue and rampage, eventually destroying the entirety of Daybreak Town. Isamu was one of the few survivors of the incident and the event, along with its cover-up by Hiden Intelligence, led to Isamu developing a distrust of HumaGears.

Isamu's hatred of HumaGears eventually led him to join the Artificial Intelligence Military Service (A.I.M.S.), an agency designed to investigate and combat rogue HumaGears, where he eventually rose to become captain. At some point, Gai Amatsu planted an AI chip containing the data of MetsubouJinrai.NET member Naki inside Fuwa's head, allowing Gai to take control of Fuwa remotely.

After MetsubouJinrai.NET reemerged and began hacking HumaGears to turn them into Magia, Fuwa led an A.I.M.S. squad in response to the attacks. Isamu eventually broke into A.I.M.S. armory and took the Shot Riser along with the Shooting Wolf Key, allowing him to transform into Kamen Rider Vulcan.

Over time, and through working with Hiden Intelligence's new CEO Aruto Hiden, Isamu's distrust of HumaGears became mitigated somewhat, especially after he was injured in battle and his life was saved by doctor HumaGear Dr. Omigoto.

After MetsubouJinrai.NET stole all of the Progrise Keys and used them to reawaken the Ark, Fuwa led A.I.M.S. in a raid on MetsubouJinrai.NET's hideout, which they discovered was in the ruins of Daybreak Town. During the raid, Fuwa used the Assault Wolf key he stole from the cyber-terrorist group to become Kamen Rider Vulcan and battle Kamen Rider Jin. After beating Jin, Vulcan attempted to finish him off but Horobi got in the way and absorbed the attack instead, resulting in him seemingly being deactivated.

In response to raid, Jin assembled an army of Trilobite Magia and Gigers and led a massive attack on the nearby city, but A.I.M.S. managed to fight it off with help from Kamen Rider Zero-One. After the battle, Horobi's damaged body was taken into A.I.M.S.'s custody, where it mysteriously reactivated.

Isamu later tried to interrogate Horobi, but Horobi would not give any answers. Horobi was later mysteriously broken out by Jin and a hooded figure. During his investigation to uncover how Horobi escaped, Fuwa learned from Gai about the AI chip inside his head. Jin later approached Fuwa and revealed that he had Naki take over his body to break Horobi out, showing him security footage from inside Horobi's cell that briefly showed Fuwa's face on the hooded figure. After learning this, Isamu confronted Gai again demanding to know why he had planted the chip in his head to make him work for MetsubouJinrai.NET. Gai answered that the chip contained the mind of Naki of MetsubouJinrai.NET and took control of the chip to demonstrate his hold over Isamu, causing Isamu pain while declaring him to be one of his tools. 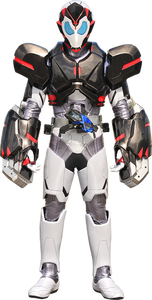