Playing the lute, Imagining Rudy as a golden retriever

Artistic Heroine, Supporter, Protector of Innocence, Tsundere
Isuzu is one of the main protagonists of the light novel and anime series Log Horizon. She is a beginner player of Elder Tales and a Human Bard-Nomad. Initially held as a captive of Hamelin after the Apocalypse (along with Touya and Minori), she was later freed after Shiroe forced their disbandment. Afterwards, she became a member of the Crescent Moon Alliance, but later left to join Log Horizon.

She is voiced by Eriko Matsui in the Japanese version of the anime and Margaret McDonald in the English version, the latter of whom also voices Rikka Takanashi and Miho Nishizumi.

Isuzu is a typical young girl who is three years older than Tohya and Minori. Her most distinguishing traits are the freckles around her nose and her long, braided ponytail, both of which were carried over from her real-life appearance. She is rather tall and skinny as a result of a hormone problem during puberty, and she doesn't consider herself to be pretty or unique.

Before the Apocalypse, Isuzu was a relatively normal high school student with no real difficulties outside a hormone problem. She loved music, considering it to be a hug and so when her brother gave her a one-week pass to play Elder Tales, she was intrigued by the Bard class. However, she intended to quit after the pass ran out and fell into deep despair after being trapped by the Apocalypse. During her time under Hamelin's thumb, she felt crushed by their oppressive rule until given a way out by Shiroe's plan.

While generally a very kind person, Isuzu isn't above chewing out her friends for taking what she sees as foolish risks; this is shown when Rundelhaus resurrects for the first time and she reprimands him for getting himself killed after taking on a pair of dire wolves by himself, especially since he would have died permanently had he not signed Shiroe's contract at the last minute. She even goes so far as to hit him several times until he sincerely apologises, and call him the biggest idiot she's ever met, though she changes her attitude immediately afterwards and the two reconcile.

Isuzu is heavily implied to have developed feelings for Rudy; although she doesn't outright say it, it's obvious to everybody that the reason she left the Crescent Moon Alliance to join Log Horizon was so she could be with him. However, she has yet to openly express these feelings, and does occasional bickering with Rudy, making her something of a tsundere. Isuzu also has a funny habit of imagining Rudy as a golden retriever, which she developed after seeing him do a dog-like gesture.

Isuzu is shown to have low self-esteem; in her opinion, she is a rather typical country bumpkin, having no particularly distinguishing features. She also has low confidence in her music abilities; when Rudy applauds a song she plays for him, she claims that it wasn't worth such praise. When the group are on a tour, she plays a concert in every town they stop in, and whenever the group describe her performances as 'great' or 'amazing', she always dismisses them as exaggerations. This insecurity is largely due to the fact that, back in the real world, nobody ever gave her a compliment for her skills, as well as the fact that her father is a rock star, and so she fears she'll never be as good as him. Nevertheless, Nyanta and Rudy both believe she's being too hard on herself, with the latter in particular saying that she should give herself some credit and stop second-guessing herself all the time.

Isuzu is a Bard, one of the three Weapon-based classes. Despite this, Isuzu's combat skills are limited, as she can only equip leather armour and is limited to using short swords, bows and other light weapons or instruments (she wields a glaive). Although she states that she's more durable than a Sorcerer like Rudy, she is ultimately not fit for direct combat. Her strength lies in her Song Magic, which allows them to tremendously increase their allies' combat prowess. In particular, the Bard has support songs that grant continuous buffs until cancelled and are ranked substantially above those cast by an Enchanter like Shiroe. 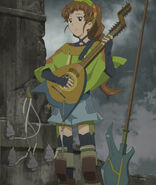 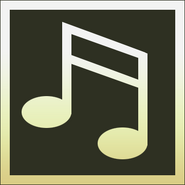 The emblem for Isuzu's class, the Bard
Add a photo to this gallery
Retrieved from "https://hero.fandom.com/wiki/Isuzu_(Log_Horizon)?oldid=1624984"
Community content is available under CC-BY-SA unless otherwise noted.