Italy is one of the main characters from the Hetalia series. His human name is Feliciano Vargas.

Italy has brown hair with a curl on his left side of his head behind his ear. He has brown eyes and is tall and leanly build. He is physically 20 years old.

Italy is a cheerful and kindhearted young man who loves women and is extremely obsessed with pasta. He is a very good artist and is also very good at business management. However, when it comes to the battlefield, he usually runs away and always rely on Germany to come and rescue him whenever he is in a fix. He can be a dunce when comes to using military equipment. He gets scared easily and can be a big crybaby. However, he does what he can for his allies and tries his best to be brave.

Italy along with his older brother are the grandsons of the Roman Empire who was once a great and powerful empire. After the fall of his grandfather, the young Italy was taken in by Austria to be his servant and during that time was forced to wear maid outfits with the Holy Roman Empire who often mistaken him to be a girl because of Italy's high pitched voice. South Italy was taken in by Spain and was forced to work for him. Years later as Italy reached puberty, Italy was reunited with his brother in 1861 and lived with him in the same house ever since. As Italy reached adulthood, he met Germany and he became part of the Axis team along with Germany and Japan.

Italy along with the other allies all work together to protect the world. During the World Wars, he was enemies to the Allies but in the later years they are all on good terms and became allies. 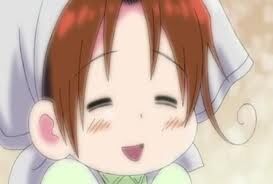 Italy as a child 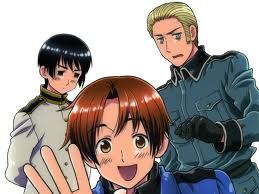 Italy and the Axis 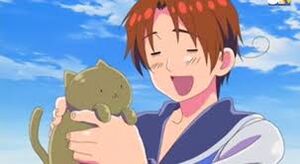 Italy with his cat 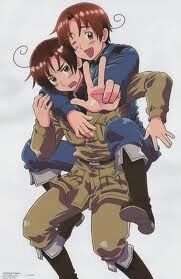 Italy and his older brother Lovino 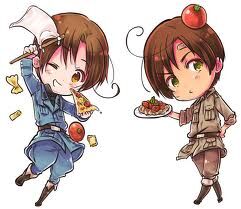 Retrieved from "https://hero.fandom.com/wiki/Italy_(Hetalia)?oldid=1767495"
Community content is available under CC-BY-SA unless otherwise noted.