Member of the Order of the Stone (formerly)

Reveal the secrets of the Order of the Stone (status dependent on the player's choice).

He is a disgruntled former member of the Order of the Stone who quit due to their lies. In retaliation, Ivor spawned a Wither Storm to prove that the Order is not what they claim to be (though there were better ways to do so). After redeeming himself, he becomes a good mentor to Jesse.

He is voiced by Paul Reubens, who is best known for playing Pee-Wee Herman.

Ivor, Soren, Gabriel, Elleegard, and Magnus were once members of the Order of the Stone, a group of supposed legendary heroes. Along with the others, he embarked on many adventures until they entered the legend by defeating the Ender Dragon.

However, Ivor left the Order due to the Order lying about their legend and nothing more than frauds: Instead of lifetime experience, study, and training, all of the Order members' powers and abilities were in fact, secretly granted by Soren with the use of the Command Block's reality-warping ability. In spite of them being able to use their granted powers for their early adventures, the Order is ultimately not ready against Ender Dragon in their supposed legendary battle, prompting Soren to use Command Block again to destroy the Dragon, this time, in front of his friends.

Gabriel, Elleegard, and Magnus tolerated Soren when he revealed that his Command Block was the source of their powers, and even agreed to make up the story of their supposed legendary battle to avoid facing ridicule for incapability to defeat Ender Dragon.

Since that moment, despite the Order giving him all their treasures in exchange for keeping the truth secret, he vowed to get revenge on all of the Order and came up with the idea to summon a special Wither, with the command block used to defeat the Ender Dragon.

A Block and a Hard Place

When Jesse's gang stumbles upon a swamp on their journey to the Far Lands, Jesse sees a witch hut and decides to steal a cake from the hut. But Ivor tells him or her about witches, and the player can either choose to warn his or her friends or steal the cake. Ivor is not seen again until Soren tells the truth about the Order, at Ivor's fortress in the Far Lands.

After Soren tells the truth to Jesse, Ivor barges into the room containing his Enchanted Book and tells Jesse about what the Order really is, along with why he unleashed the Wither Storm in the first place (which was to show the Minecraft world that the Order was a bunch of liars and cowards). Later when Jesse's gang returns to Soren's temple with the Enchanted tool, (player-determinant) Gabriel or Soren runs away from the gang, and Ivor pursues them. Ivor is seen again at Reuben's funeral. If the player decides to keep the truth about the Order hidden, Ivor will shake his head in disapproval and nod in approval if you let Gabriel tell the truth.

In this episode and beyond, Ivor has become more heroic. He has now become a member of the New Order of the Stone, as their mentor and giving them information and tips about where they can find treasures. Sometime after Episode 4, he gives the New Order of the Stone a tip regarding a treasure in an old temple. After they return from the temple with a treasure, Ivor is seen in town arguing with the townspeople over his "new house", which reassembles a skull with tentacles, is made mostly of stone brick, and has lava pouring out of its "mouth". Jesse has the option to tear it down or let it be. Depending on Jesse's choices, the townspeople will either start tearing it down, much to Ivor's anger or storm off, while Ivor gloats.

Regardless, when Ivor learns that Jesse found a treasure, he says to meet them in The Treasure Room in ten minutes. Either Jesse or Olivia tells Ivor that they found something at the temple in the jungle he told them about. Ten minutes later, he meets Jesse, Petra, and Lukas in the New Order of the Stone's Treasure Room and tells them that the enchanted flint and steel they found belonged to "The Old Builders", who also supposedly owned "The Eversource", a treasure supposedly capable of producing an endless supply of precious materials.

At the very end of the 3rd episode, Jailhouse Block, Romeo summons him (while being disguised as Jesse), while Ivor is wearing a costume, and he becomes a bounty hunter. Romeo tells him that he "can't let anyone run around disguised as him/her or his/her friends", and tells him to "make sure they are behaving themselves". With that, Ivor takes the Amulet and disappears in a puff of smoke.

Ivor first appears out of some smoke, and Jesse sees him. They both clash, with the latter's friends watching. Jesse makes a move by missing Ivor's sword that almost cut off his/her head. Then, Ivor shows Jesse that he's holding potions, and they continue to fight. After that, Ivor is excited to see the real Jesse, and that he's now a ninja. 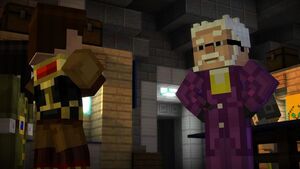 Hadrian talking to Jesse in the Dormitory. (Ivor can be seen on the far left.) 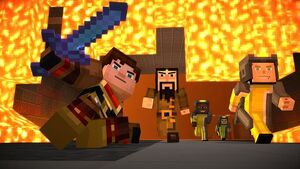 Ivor and Jesse during the Old Builder Games.

Ivor and the others watching as Jesse eliminates Hadrian. 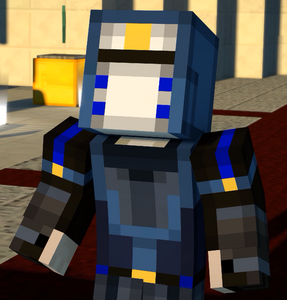 Ivor as the bounty hunter working for Romeo. 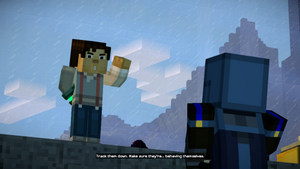