Evolved Starter
Ivysaur (Fushigisō in Japanese version) is a Pokémon from the first generation. It evolves from Bulbasaur and into Venusaur.

Ivysaur is a quadruped Pokémon similar to a dinosaur. It has blue-green skin with darker patches. On top of its head are pointed ears with black inside, and it has narrow red eyes. It has a short, rounded snout with a wide mouth. Two pointed teeth protrude from its upper jaw. Each of its feet have three claws on them. The bulb on its back has bloomed into a large pink bud. A short brown trunk surrounded by leafy green fronds supports the bud. The weight of the plant prevents Ivysaur from standing on its hind legs and forces its legs to grow sturdy. When its flower is ready to bloom, it gives off a distinct, strong sweet-smelling aroma and starts swelling. Ivysaur will also start spending more time in sunlight in preparation for its upcoming evolution. Exposure to sunlight adds to the strength of both Ivysaur and its plant. Ivysaur's natural habitat is plains. However, it is rare, as many are in captivity.

Ivysaur's appearance is very similar to that of its pre-evolved form, Bulbasaur. It still retains the turquoise skin and spots, along with its red eyes. Ivysaur's top fangs are now larger and are visible outside of the mouth. Also, its ears are now darkened to black in the center. Carrying the weight of the bud on its back makes Ivysaur's legs stronger. The most notable change is that the bulb is starting to bloom, with pink petals visible, and large leaves on the bottom.

Its blossom on its back grows larger in the sunlight. As the blossom grows, Ivysaur loses the ability to stand on its hind legs. The blossom produces a pleasant smell when it is ready to bloom, it means Ivysaur is ready to evolve into Venusaur.

May's Bulbasaur evolved into an Ivysaur sometime after The Right Place and the Right Mime, which further evolved into a Venusaur prior to Pruning a Passel of Pals!.

Shauna's Bulbasaur was revealed to have evolved into an Ivysaur in Tag Team Battle Inspiration!.

In Bulbasaur's Mysterious Garden, numerous Bulbasaur were seen evolving into Ivysaur, during which Ash's Bulbasaur decided it was too early to evolve.

A Trainer named Assunta used an Ivysaur to battle and defeat Ritchie in the Indigo Plateau Conference in Friends to the End.

An Ivysaur was under the ownership of Crystal in Putting the Air Back in Aerodactyl!.

Ivysaur appeared under the ownership of a teenager named Jimmy in Judgment Day.

Ivysaur first appeared in A Chansey Operation, where it was one of the injured Pokémon brought to the clinic.

In The Ultimate Test, an Ivysaur was one of the Pokémon owned by the Pokémon League entrance exam instructor.

Ivysaur was among the numerous Pokémon who moved closer to the sea as it sensed the disturbance caused by Lawrence III in the second movie, The Power of One.

Multiple Ivysaur appeared in the intro of Destiny Deoxys.

Jeremy's Ivysaur appeared in a flashback in Weekend Warrior.

A Coordinator's Ivysaur appeared in Playing the Performance Encore! participating in the Battle Stage of the Daybreak Contest along with a Togetic.

Ivysaur appeared in SM003 as a silhouette.

In The Electric Tale of Pikachu manga

In I'm Your Venusaur, Ash's Bulbasaur and Pikachu befriend a wild Ivysaur who tells them the legend of a 300-year-old Venusaur, who is the local guardian. Together they search for the Venusaur and defeat Team Rocket, who attempted to steal it.

In Pokémon Adventures, Red had an Ivysaur named Saur that evolved from his Bulbasaur upon his arrival at Celadon City in Wartortle Wars. He evolved into Venusaur during a battle with the legendary bird hybrid at Silph Co. in The Winged Legends.

Emerald rented an Ivysaur during his Battle Factory challenge in Pinsir Me, I Must Be Dreaming.

An Ivysaur appeared in Skirting Around Surskit I as a rental Pokémon that Guile Hideout stole.

In Interrupting Ivysaur, an Ivysaur under the ownership of a Pokémon Breeder named Leonardo appeared during Platinum's challenge at the Battle Arcade.

In the Pokémon Gotta Catch 'Em All manga

Ivysaur appeared in Catch the Poliwag!.

Ivysaur is a playable Pokémon used by the Pokémon Trainer. It can use the moves Bullet Seed as a rapid aerial striking move and Vine Whip as a recovery move where the vine is shot out to latch onto the edges of a stage and pull it back up again. It also uses the projectile attack Razor Leaf. Ivysaur is a Middleweight and uses mostly physical Grass-type attacks. It uses SolarBeam in the Pokémon Trainer's Final Smash, Triple Finish.

Ivysaur appears as a trophy in both versions of the game.

The Pokémon Trainer returns as a playable character, and Ivysaur is still one of the Pokémon he/she can use. In this game, the elemental weaknesses of Ivysaur, Charizard and Squirtle to fire, water, and grass-based attacks have been removed entirely.

Ivysaur is a playable character in Super Smash Bros. Brawl, as one of the three Pokémon usable by the Pokémon Trainer, or Red. Ivysaur is surprisingly agile in the game, being able to jump to a great height and attack with great speed. Its moves, based upon Grass-type moves in the Pokémon games, are Solar Beam, Vine Whip, Razor Leaf, and Bullet Seed.

Ivysaur appears to be based primarily on some form of reptile, specifically mammal-like reptiles known as Dicynodonts from the Permian period. Along with visible ears and no genuine metamorphosis stage (evolution aside), Ivysaur appears to have more in common with mammals than amphibians such as frogs and toads, which metamorphose from one definite creature into another as they mature as opposed to just growing into a larger adult version of itself the way that Bulbasaur does. Alternatively, Ivysaur's large rounded snout, wide mouth, wide-set eyes, blotch-patterned skin, and quadruped-like movements are vaguely similar to those of certain amphibians, such as the common toad. Unlike Bulbasaur, Ivysaur's "ears" do have hollows indicating that they are in fact ears and not glands, as seen in many species of frogs and toads.

The bulb on its back now resembles the bud of a genus of parasitic flowering plants known as Rafflesia.

Ivysaur is a combination of the words ivy (woody climbing or trailing plant genus) and the Greek saur (lizard).

Fushigisou can be taken to mean "it seems strange" or 不思議 草 fushigi sou (strange grass).

Names in other languages 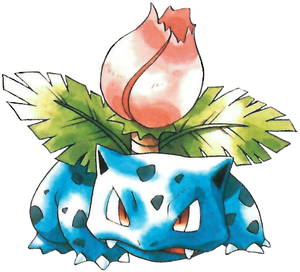 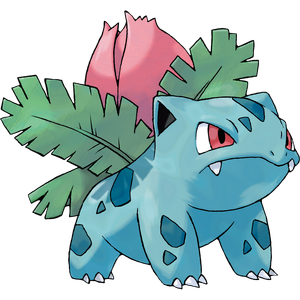 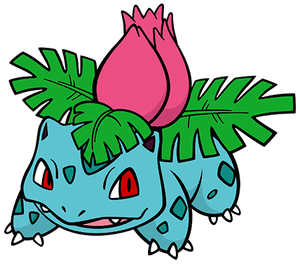 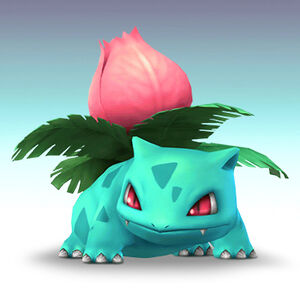 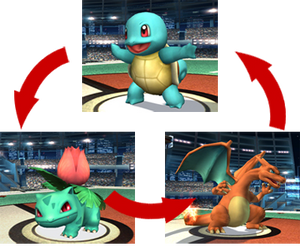 The order in which Pokémon Change will rotate (Squirtle→Ivysaur→Charizard) 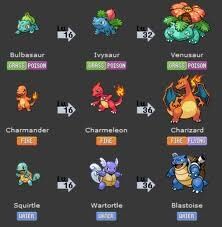 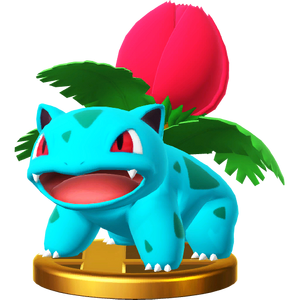 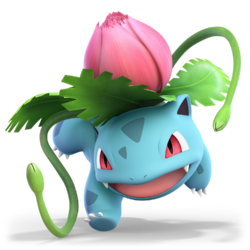 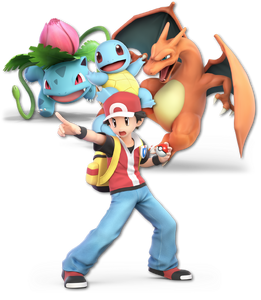 Retrieved from "https://hero.fandom.com/wiki/Ivysaur?oldid=2220693"
Community content is available under CC-BY-SA unless otherwise noted.