Working at her butcher shop

Izumi Curtis (neé Harnet), is a supporting protagonist in the anime/manga series Fullmetal Alchemist. She is the teacher of Edward and Alphonse Elric who agreed to train the brothers to hone their alchemical abilities after their mother died. She expands their training with a regimen of philosophy, martial arts, and living off the land. She is also the wife of Sig Curtis.

Izumi is a rather attractive and deceptively young-looking woman despite being middle-aged. She is fairly tall and fair-skinned with dark-eyes, a slender frame with a curvaceous yet well-toned figure, and upperback-length black hair worn in box braids. On the left side of her collarbone is a Flamel tattoo. She normally wears a long white collared-blouse with a flowing backside, form-fitting grey pants reaching her ankles, and opened-toed sandals that have the letters "W.C." on them.

Although Izumi takes apparent pride in being a simple housewife and introduces herself as such to anyone who asks, her attractive and humble exterior belies a fearsome disposition such that Ed and Al become terrified at the mere thought of aggravating her. She is prone to swift acts of violence and is often seen dealing out physical harm.

However, despite her frequently aggressive nature, Izumi is a remarkably caring, wise and perceptive woman always willing to help those in need, especially children.

That being said, she is also a great advocate of helping people to make their own way and will usually only intervene on behalf of those with the will but not the means to help themselves. Though she has a great deal of alchemical skill and faith in her alchemical power, Izumi frequently values the idea of working hard and only using alchemy for things that cannot be done by hand, stressing to others that alchemists are still only human and have human limits.

Additionally, Izumi appears to greatly enjoy travel (a trait she may have passed on to Edward), as many of her appearances in the series find her journeying outside her hometown.

Izumi is among the strongest characters in the series. An extremely powerful martial artist, both in terms of armed and hand-to-hand combat, she boasts shocking physical strength and proves herself capable of easily subduing multiple enemies in a flash and overpowering larger opponents such as mountain grizzly bears, and even the Homunculus Sloth.

Though Izumi appears as an unbeatable paragon of fearsome power, most acts of overexertion on her part are followed by a crippling regurgitation of blood linked to an internal injury from a failed Human Transmutation several years before. As a result of this, she is one of the few characters able to perform alchemy without the aid of a Transmutation Circle. By merely touching her palms together, she creates an energy circulation with her arms and transmutes by using her own will as a substitute for the necessary runes. This remarkable talent makes Izumi's transmutations both instantaneous and incredibly versatile, allowing her to use alchemy to its fullest potential in direct combat. Later in the manga storyline, her internal organs are rearranged by Hohenheim to improve her health, relieving her issues with physical overexertion.

Her specific alchemy-style seems to focus more on her immediate surroundings and how best to use them to her advantage. She also shares with Edward the same preference for creating spears to wield with deadly proficiency. 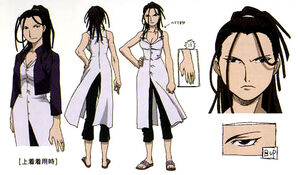 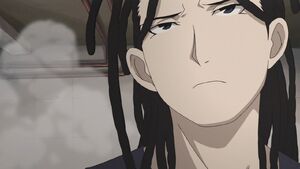 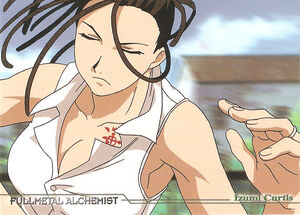 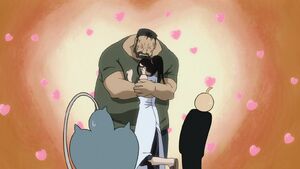 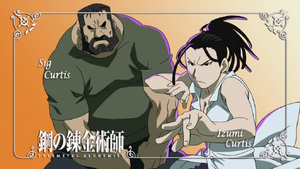 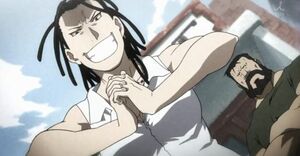 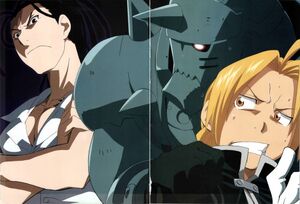