Izzy is one of the two tritagonist of Disney Junior's 2011 animated television series, Jake and the Neverland Pirates.

She is a seven-year-old pirate girl who has the ability to fly due to her Pixie Dust given to her by Tinker Bell and the other fairies. She is beautiful and just as adventurous as Jake and Cubby. She loves puzzles, music, and of course singing and dancing. She seems to be the brightest member of the trio. She treats animals like her children and cares for them. She is also part of Jake's crew on their pirate ship Bucky.

Izzy treats Cubby like a sibling and cares for him deeply. She thinks of Jake as an older brother and more than a friend at the same time. Izzy shares some traits with Tinker Bell most notably her feisty attitude. Izzy believes that with only practice will you achieve a goal showing that she's a hardworking and strong-willed pirate.

Izzy shows a small fear of Captain Hook but does not let it get in the way of her and her friends saving the day. She is not afraid to stand up to Hook and shows her anger when he betrays them and steals from them. Izzy and Mr. Smee rarely communicate but they seem to be more acquaintances like her enemies. Smee is just as kind to Izzy as he is to Jake and Cubby. 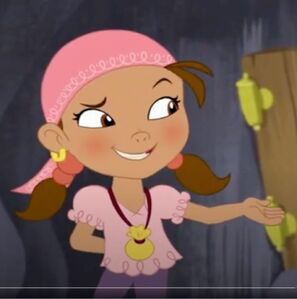 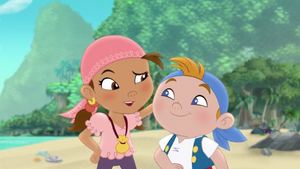 Retrieved from "https://hero.fandom.com/wiki/Izzy_(Jake_and_the_Neverland_Pirates)?oldid=2225345"
Community content is available under CC-BY-SA unless otherwise noted.