Jūgo is a tall, muscular young man who has spiky orange hair, red-orange eyes and a usually calm disposition. However, when affected by his murderous side, his skin turns dark, his irides become a pale yellow colour while his sclerae turn black, and he grows various weapons and appendages to suit his battle combat situation, as well as having a deranged look.

While Jūgo initially appeared quite bloodthirsty, Karin noted that this was only common behaviour when he was enraged; Jūgo himself didn't want to kill anyone and in reality he is a very gentle person. His fits of rage are random and uncontrollable, and thus are the reason why he willingly chooses to remain confined where he won't bring harm to anyone. However, he is willing to unleash his psychotic side in battle, as it enhances his fighting capabilities. The only reason he agreed to go with Sasuke is because he views Sasuke as the only person capable of preventing him from killing people while enraged, by the means of killer intent or the Sharingan. He thinks of Sasuke as his "cage".

Before Sasuke, it was Kimimaro who kept Jūgo in check, and as Kimimaro was the only person Jūgo came into any contact with, the two grew close. After hearing that Kimimaro sacrificed his life to deliver Sasuke to Orochimaru, Jūgo believes that Kimimaro's spirit continues to live on in Sasuke, and thus is completely loyal to him, even after Taka had been disbanded, and Sasuke left them in the Land of Iron, Jūgo made his way back to Sasuke and matter-of-factly noted when asked, that his place was beside Sasuke as his shield. 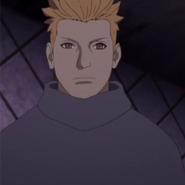 Jugo from Boruto: Naruto Next Generations 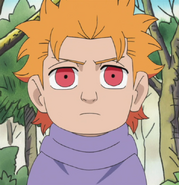