JB Reese is a computer genius and a martial arts-black belt. JB is obsessed with technology and constantly relies on it for solutions. But his ongoing experience as a VR Trooper has taught him to appreciate life outside such conveniences. JB is quite capable of holding his own in battle, armed with a laser gun and a Laser Lance; he often uses the latter as a inishing maneuver against Grimlord's monsters and robots, but only uses it as a regular sword in combat known as the Super Saber. Once he forms the Laser Lance by extending a second blade on his Super Saber, he usually impales a mutant, who then (A) surrenders; (B) has "heartburn"; or (C) is unaffected (only Mechanoid, Photobot, Fanbot, and Electrobot are immune to the Laser Lance impalement and only Fanbot was immune to it altogether), typically the mutant surrenders. If the mutant does surrender, JB destroys it anyway via rapid and repeated slashes; the mutant overheats, falls over and explodes. Also in JB's arsenal is the VR Techno-Bazooka (basically a double-barrel cannon); JB projects a giant virtual image of himself to pull the trigger. The VR Techno-Bazooka is always used on Grimlord's air forces, never on any monsters with one notable exception, Fanbot, a mutant that couldn't be hurt by any other arsenal (including the Skybase). When the battle grows too dangerous for reality, JB activates a Vortex Command (via a button on his waist) to transport himself and the enemy into virtual reality. He also uses the VR Skybase (which can transform into Troopertron, a giant robot) and battle cruiser, when needed; his vehicles-arsenal also includes a VR Fighter bike (also known as the Sky cycle). His signature color is black.

Throughout the series' run, it was never explained what JB's initials stood for. Also, while his father was seen in a few episodes, JB's mother was never seen or mentioned at all.

He was portrayed by Michael Calvin Hollander. 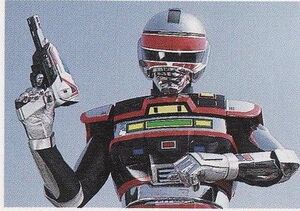 Add a photo to this gallery
Retrieved from "https://hero.fandom.com/wiki/JB_Reese?oldid=1860701"
Community content is available under CC-BY-SA unless otherwise noted.