The Thrawn Trilogy: The Last Command

Skilled with a lightsaber, generic Force powers (almost as powerful as his uncle), ability to communicate and connect with all life, Art of the Small, flow-walking, Theran listening, ability to block a electroencelphoscan, memory rubs, shatterpoint, create powerful Force illusions, achieving oneness with the Force, pause time, various other unique Force abilities

Jacen Solo was the main protagonist of the New Jedi Order series. He is the son of Han Solo and Leia Organa, the brother to Jaina and Anakin Solo. He is also the nephew of Luke Skywalker and Mara Jade Skywalker, the cousin to Ben Skywalker, and grandson of Anakin Skywalker and Padmé Amidala.

A Jedi Knight, Jacen was well known as the hero who saved the galaxy from the Yuuzhan Vong. He continued to be seen as a hero until his fall to the dark side in the Legacy of the Force series, in which he became the villain Darth Caedus. He serves as the main overarching protagonist of the New Jedi Order series, the main antagonist of the Legacy of the Force series, a posthumanous character in Fate of the Jedi, and a major supporting protagonist in several other Legends stories.

Though part of Legends are not canon for the films, Jacen Solo's character inspired Kylo Ren for The Force Awakens and onward.

The son of Han Solo and Leia Organa Solo, Jacen was strong in the Force like his mother and uncle, Luke Skywalker. He and his twin sister, Jaina, were born five years after Star Wars Episode VI: Return of the Jedi, and because the New Republic was under attack by the forces of the Empire, the twins were raised in hideaways, first on New Alderaan and then on the planet Anoth under the guidance of Leia's trusted aide, Winter. When they were two, the twins were brought back to their parents to live on Coruscant, cared for by C-3PO and Chewbacca.

With unruly dark hair and deep brown eyes inherited from his mother, Jacen was a true lover of nature. He kept a variety of pets and samples of many plants. Jacen's Force sensitivity manifested itself in strong communication abilities, particularly with other Jedi and a variety of animals.

Always powerful in the Force, before his third birthday, he helped defend his uncle. The spirit of the Dark Jedi Exar Kun sent ancient flying beasts to attack the near-lifeless body of Luke Skywalker on Yavin IV, and Jacen wielded Skywalker's own lightsaber. Later, Jacen joined forces with the other Jedi students in destroying Kun's spirit forever and freeing Skywalker's spirit.

When he was five, he, Jaina, and their younger brother Anakin were kidnapped by Lord Hethrir, the former Imperial Procurator of Justice, who wanted to use them to further his dark side ambitions. Still later, when in their early teens, the children enrolled in their Uncle Luke's Jedi Praxeum and became friendly with Chewbacca's nephew Lowbacca and Tenel Ka, daughter of Queen Mother Teneniel Djo and Prince Isolder of Hapes. The twins and Lowbacca were kidnapped and taken to the Shadow Academy where an attempt was made to turn them to the dark side of the Force. They thwarted the plot and escaped.

When he constructed his own lightsaber, Jacen chose focusing stones that produced an emerald-green blade, which was once the blade of the Jedi Consular, fitting for the thoughtful Solo. He later trained with Skywalker himself, as Skywalker began moving the new Jedi Knights back to Old Republic-era style of teaching.

During the Yuuzhan Vong invasion, Solo traveled with his younger brother to Centerpoint Station, but her urged Anakin not to use the Force to fire the station's main repulsor. When his cousin Thrackan Sal-Solo fired it instead and destroyed the Hapan fleet, Solo felt himself lost in his struggle to understand the Force. After having an intense vision of the galaxy teetering on a single balance point that he alone controlled, Solo tried to stop using the Force altogether.

However, when his mother was threatened by the Yuuzhan Vong on Duro, Solo realized that he had reached the balance point in his vision. Drawing on the Force, Solo badly injured the Yuuzhan Vong Warmaster Tsavong Lah, earning himself a position of hatred among the invaders. Shortly afterward, Solo and his siblings joined the Jedi strike team to Myrkr to destroy the voxyn queen. Anakin lost his life, and Jacen was captured.

During his captivity, Solo received instruction from the former Jedi Knight Vergere, who was now living among the Yuuzhan Vong. Vergere tried to turn him to the Yuuzhan Vong True Way, and he endured the Embrace of Pain for many months. Solo began to believe that the Force was not simply black and white. He escaped to conquered Coruscant (now Yuuzhan'tar), where Jedi Knight Ganner Rhysode gave his life to allow Solo time to tamper with the invaders' World Brain and sabotage Yuuzhan'tar's terraforming.

Solo later returned to Master Skywalker, who allowed him to rejoin the Jedi. Upon his return, Solo reunited with his sister and took part in her Twin Suns Squadron. During the Battle of Ebaq, his unofficial Master Vergere sacrificed herself to save him from the Yuuzhan Vong. Shortly after her death, Solo spoke with her spirit and decided to honor her memory by fighting to achieve his destiny. This was also the battle that saw the death of Solo's nemesis Tsavong Lah.

Using Vergere's advice, Solo journeyed with Skywalker, his aunt Mara Jade Skywalker, the Jedi Knight Saba Sebatyne, and astrophysicist Danni Quee on a mission to the Unknown Regions to rediscover the living world of Zonama Sekot. On the way, Solo and his team came across the Imperial Remnant and helped Gilad Pellaeon convince the Moffs to ally with the Galactic Alliance against the Yuuzhan Vong. Later, through the Chiss, Solo managed to discover the location of the "rogue planet."

Later, Solo, Sebatyne, Quee, and the Skywalkers spent time on Zonama Sekot. While there, they learned that world had last been visited by Solo's grandfather Anakin Skywalker and his Master Obi-Wan Kenobi on a mission to locate Vergere. It is equally shocking to discover that the planet's Magister Jabitha was a close friend of the eldest Skywalker, and she only agreed to speak with the Jedi because she recognized Skywalker and Solo as Anakin's descendants. Over time, Solo and Skywalker managed to convince Sekot to return with them to redeem the Yuuzhan Vong—a plan Sekot would formulate with the help of Yuuzhan Vong Priest Harrar.

During the recapture of Yuuzhan'tar, Solo found himself face-to-face with Onimi, the Yuuzhan Vong court jester who was revealed to be the true power behind the throne. Solo became a luminous being and living conduit of the Force, killing Onimi and ending the war. Through his alliance with Sekot, Solo was also able to convince the Galactic Alliance to sign peace treaty with the Yuuzhan Vong. Exiled to Zonama Sekot, the Yuuzhan Vong were allowed to return to their initial peaceful nature.

Following the Yuuzhan Vong War, Solo decided to set out on a spiritual journey in search of other Force users. His studies led him to a neutral philosophy, and he refused to take sides in the growing Swarm War. Solo also learned that he now had a daughter, born to Queen Mother Tenel Ka of Hapes. The revelation led to his taking up arms against the Killik Colony.

After the conflict's resolution, Solo took on Ben Skywalker as his apprentice. As the new Corellian insurrection wore, Solo fell under the influence of Lumiya, Dark Lady of the Sith. Lumiya explained that Solo could only hope to achieve his true potential if he followed the Sith way. Though Solo had his reservations, over time he was convinced that he and Lumiya had the same goals: to find peace for the galaxy. However, as a Sith, he still deemed Lumiya to be a dangerous ally - as such, he kept his daughter Allana a secret from her.

During this time, Solo became involved with the Coruscant Security Force, helping them track down Corellian terrorists and founding the Galactic Alliance Guard. His fall toward the dark side was precipitated by his beating and killing of an interrogation subject, Ailyn Vel. This caused Han Solo to turn his back on his son and left Solo even more receptive to the Sith philosophy.

Solo's reputation as a galactic hero was heightened in the wake of his assistance in defending Queen Mother Tenel Ka from traitors, giving him even more power within the Galactic Alliance. Over time, Solo assumed the position of Chief of State after jailing Cal Omas for treason, putting the galaxy under martial law for the duration of the crisis.

On Kavan, Solo confronted his Aunt Mara, stabbing her with a poisoned dart. She died swiftly, creating a shift in the energies of the Force that Solo knew would alert Skywalker. Solo fled to Ziost, where Lumiya agreed to lead Skywalker to believe she had been Mara's killer. After returning Jade Skywalker's body to Coruscant, Jacen Solo effectively died, as he had been corrupted into the Sith Lord Darth Caedus.

Now a Sith Lord, the Jedi and the Mandalorians formed an alliance with Caedus's former ally Cha Niathal to take the Sith Lord down. In the end, Caedus's sister met him in combat and killed him. But as he died, it is believed he became Jacen Solo once more. As life left his body, Solo's last thoughts were to telepathically warn Tenel Ka to take Allana and run, successfully saving her from the Imperial nanovirus. In the end, Jacen Solo died as the hero he had once been. 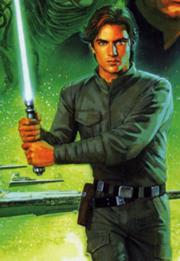 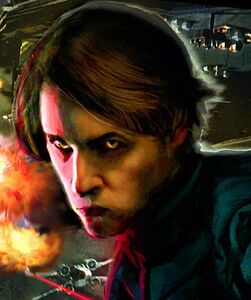