Fontaine's Ace in the Hole

Jack (c. 1956) is the protagonist of BioShock, whom the player controls throughout the game. He is a young Caucasian male who, prior to his unwilling arrival in Rapture, was a passenger on an airplane that crashed near a lighthouse that provided entry to the underwater city.

During his journey through Rapture, he comes across a number of various gene-altering substances, known as Plasmids, that he uses to empower and protect himself. Jack also appears in Bioshock: Burial at Sea - Episode 2, with his role of the events of the first game coming into place.

He is voiced by Nate Wells.

Jack is the illegitimate son of Andrew Ryan and Jasmine Jolene, Ryan's mistress. An audio diary by Jolene, and photos found on Ryan's desk, indicate that Jack was purchased by Brigid Tenenbaum on behalf of Frank Fontaine as an embryo. Jack was to be Fontaine's back-up plan if he was ever forced into a bad position by Ryan during the increasing hostility leading up to Rapture's Civil War. Jack was "born" and raised by the scientists of Fontaine Futuristics, including Dr. Yi Suchong and Brigid Tenenbaum.

According to audio diaries by Dr. Yi Suchong, who was responsible for Jack's development, Jack weighed fifty-six pounds and had the "gross musculature of a fit nineteen-year-old by the age of one", thanks to Lot 111. Dr. Suchong also reveals in another audio diary that he was responsible for the mind-control imprinting that Frank Fontaine had requested.

Jack's similar genetic structure to Andrew Ryan meant that he would be able to use the bathyspheres that were in lockdown, be resurrected at Vita-Chambers, and the automated security of Rapture would not be as effective against him. Sometime in 1958, before Fontaine faked his own death in a shoot-out with Sullivan's forces, Jack was smuggled out of Rapture in a bathysphere and sent to the surface as a sleeper agent, living out his pre-programmed life until Frank Fontaine "activated" him.

Upon Fontaine's command, using the trigger phrase "Would you kindly", Jack boarded a plane in 1960 that passed over Rapture's location in the North Atlantic, then hijacked it, forcing it to crash land at the coordinates of the lighthouse, the main entrance to Rapture. Only Jack survived the crash; he made it to the lighthouse and entered the bathysphere to Rapture. Making it to the bathysphere station, he witnesses a splicer kill one of Fontaine's men, but is saved by Atlas on the radio. Atlas guides Jack through Rapture, telling him that the place has become a nightmare, and tells him that he will help him stay alive, as long as he listens to his orders.

Jack is absent in the sequel game, although his reputation has become a thing of legend in Rapture eight years following the events of the first game. Murals are seen by the Rapture Family depicting his arrival through the crashed airplane and injecting his first plasmid. He is also viewed as a god by several members, mainly due to him killing their enemy Andrew Ryan. Member Father Wales constructs a chapel in Jack's honour, and hopes that he will return one day. An audio diary (and even another one that was cut from the game) refers to him as "A Silent God", describing his mute nature.

The fate of Jack is often debated by the splicers, and a conversation overheard by Subject Delta has them mentioning that they think he is raising the little sisters on the surface and having a happy ending, whereas another splicer believes that Jack is holding a city hostage in possession of a bomb. This is a reference to both the good and evil endings of the first game, in order not to make either one canon.

Atlas is looking for information regarding an "Ace in the Hole", which was really info on how to mind-control Jack with the "Would you kindly?" phrase. Atlas forces Elizabeth to collect this information, which she does. Once Elizabeth translates the aforementioned trigger phrase from a found document, Atlas bludgeons her with a wrench.

Before dying, Elizabeth has one final set of visions: the death of Andrew Ryan, the death of Atlas/Frank Fontaine, seeing Jack standing quietly before her, and Jack rescuing the Little Sisters (including Sally), as well as escaping the underwater city with them and starting a family. As Elizabeth dies with Sally by her side, she dies peacefully and happily, knowing that Jack will right many of the wrongs in the fallen Rapture. This also proves that the good ending of the first game is canon. 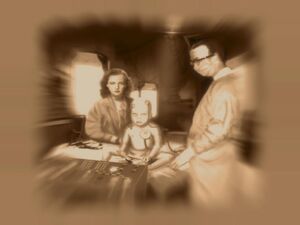 Jack as a baby with Tenenbaum and Suchong. 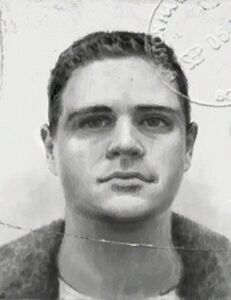 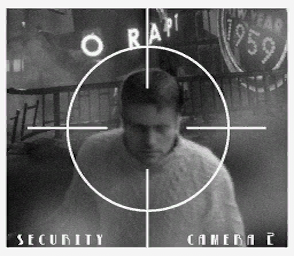 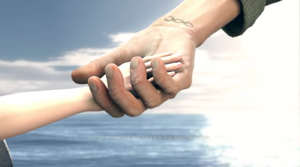 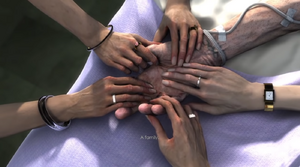 Jack spends his last moments with the Little Sisters.
Add a photo to this gallery

Retrieved from "https://hero.fandom.com/wiki/Jack_(BioShock)?oldid=2240515"
Community content is available under CC-BY-SA unless otherwise noted.