Train and lead her biotic students at Grissom Academy (determinant, successful)
Help Shepard destroy the Collectors and the Reapers

Jack is a major character in the Mass Effect games. She is recruited for Shepard's team in the second game, and makes an appearance in the third game.

She is voiced by Courtenay Taylor, who also voiced Natalya Ivanova in Destroy All Humans! 2, Nora in Fallout 4, and Ada Wong in Resident Evil 6 & Operation Raccoon City.

Jack was captured by Cerberus as a child and taken to a facility in Pragia, where Cerberus were conducting an experiment to enhance biotic potential in humans, no matter the cost. Dubbed Subject Zero, Jack, alongside other kids, were tested upon. Over the years, Jack became the center of the project experimentation, being inflicted with torturous experiments psychologically, emotionally and physically. This went further to other kids, whose tormentous experiments were now benefiting Jack, which in turn the kids grew hatred and resentment towards Jack. Eventually, a group of kids attack the guards and incite a riot in the facility. This gave Jack a chance to escape, whose biotic powers have become more powerful thanks to the experiments. After her escape, she lead the rest of her life as a bloody, violent and dangerous criminal, performing acts such as piracy, blowing up a space station and even joining a cult. Eventually, Jack was captured and imprisoned aboard the prison ship Purgatory.

Commander Shepard arrives at the prison ship Purgatory to recruit Jack. After the Warden betrays the commander, Shepard fights off the Blue Suns mercenaries and releases Jack from cryostasis, which also releases all prison blocks, inciting a riot in the process. Jack wakes up and escapes, leaving destruction along her path. On the way out, Jack meets Shepard. She immediately refuses to join Shepard, being distrustful and resented towards Cerberus, but eventually joins them after Jacks demands access to Cerberus files. Jack can be found aboard the Normandy SR2 below the main engineering on deck 4.

Jack later on enquires on Shepard help to take her to the Cerberus facility where she was tested upon and later on shutdown by the Illusive Man, where she plans to destroy the facility. When Shepard takes her to the facility, they encounter Blood Pack mercenaries. After fighting them, they encounter a man called Aresh, who was one of the test subjects in the Cerberus facility. Aresh plans to restart the facility and hired the mercs in exchange for salvage. Jack wants to kill him, but Shepard has the option to stop her. After a final glimpse of her childhood in her former room, Jack and Shepard leave, with Jack detonating the bomb and destroying the facility, closing her past life completely. Jack is a potential romance option for a male Shepard.

Back at the Normandy, if Miranda's loyalty mission is complete, Jack will have a dispute with Miranda regarding Cerberus' actions on Jack's torture. Shepard can resolve the conflict with both of them, or side with either Miranda or Jack.

Depending on Shepard's preparedness and decisions, Jack can either survive or die at the suicide mission.

In Mass Effect 3 (if she survives Mass Effect 2), Jack's appearance, as well as her personality, significantly changes. She accepted the Alliance's offer to become a teacher and instructor to train biotic students for combat at Jon Grissom Academy. Her fellow students come to accept Jack's unconventional teaching style and even get to mimic her trash talk ("I will destroy you"). Jack in turn gets to care for her students, even considering them the family she never heard.

Cerberus eventually attacks Grissom Academy to capture the students and Jack. Commander Shepard can intervene and rescue Jack and the students. Shepard can then decide on whether to assign Jack's students to artillery roles, or supportive units.

After the attempted Cerberus attack and coup, Jack can later on be found at the Purgatory club on the Citadel, reading duty rosters for her biotic students. When Shepard converses with her, Jack explains on how Shepard's "little suicide squad" taught her about teamwork, and how her students are faring. She claims that it would be fun fighting alongside Shepard once again, but adds that her students would be useless without her, and blames Shepard for her apparent "dependable" characteristics. The Commander then asks Jack to dance with them. Jack laughingly retorts that Shepard can't dance, and with that they both enjoy the dance.

If Shepard did not rescue the students at Grissom Academy in time, Cerberus will have captured the students and Jack. Later on during the Cerberus HQ attack, Shepard can acquire an audio log and will hear Jack being restrained by Cerberus and later on reliving her tortured past by being experimented on once again. Shepard will later on encounter Jack as a special Phantom enemy. As the squad are forced to kill her, Shepard states that she was no longer herself, and that will be a thing Cerberus will answer for.

At the end of the game, if Shepard uses the Crucible to destroy, control or synthesize the Reapers, Jack can be seen with her biotic students, if Shepard assigned them for supportive roles. If they were assigned for artillery roles, they would be killed in battle, with Jack visiting their graves. If a male Shepard romanced Jack, she'll be seen gazing upon the stars.

As a direct consequence of the horrors she endured as a child, Jack is (at least initially), a violent, bloodthirsty, aggressive, cynical, misanthropic, and homicidal individual. Filled with rage and hatred in general and for all things Cerberus in particular, Jack greatly enjoys violence, reveling in the destruction she causes and looking back fondly on some of her more high-profile crimes, such as taking out a moon important to the Hanar. She also expresses admiration and respect for other people's acts of ruthlessness (with the exception of Cerberus), as if Shepard takes a renegade interrupt to blast or push a mercenary out a window to his death during Thane Krios' recruitment mission, Jack will note that she should "take notes from him". Jack even, if pressed, admits that she does actually enjoy the power Cerberus gave her despite hating them for abusing and torturing her to do so.

However, if Shepard takes the time to get to know Jack, they quickly discover that Jack is incredibly bitter and unhappy as a person, still haunted by her past abuse by Cerberus and others and sustaining herself on near-constant hatred and rage. If shown compassion and understanding, Jack gradually mellows and cools down, and if romanced dares to show a softer side still with Shepard, crying and finally allowing herself to, in Liara T'Soni's words, "have faith in something besides anger".

Mean-spirited and cynical most of the time, Jack has little use for sentiment or lofty ideals, though she does have a hidden talent for poetry, again indicating that a softer side to her does exist, even if it is well-hidden. She can also be incredibly selfish, as though she hates Cerberus for their abuse of her, she has no empathy or concern for the other children at the facility who suffered alongside her, having indiscriminately killed them as well as Cerberus personnel when she made her escape from the facility and never expressing any sorrow or pity for them. Even when confronted with a fellow grown-up survivor of the atrocity, Jack is hesitant to fully admit that the other children did, in fact, have it bad as she did, her admission being reluctant and non-commital in tone. This indicates that, while a tragic figure, Jack is nevertheless also (at least initially), a self-centered one, caring only about her own suffering and pain but not anyone else's.

Due to her past with the organization, Jack is deeply hostile and contemptuous of all things Cerberus, whether they had any hand in her tragedy or not. In particular she loathes Miranda, deriding her as a "Cerberus cheerleader" and sniping at and baiting her regularly, as well as later threatening to kill her and calling her a "bitch". Though the two are able to work together reasonably effectively, and Miranda seems to be saddened by Jack's death during the Suicide Mission if she dies, the two are not friends. Even by the time of Mass Effect 3, if they are both still alive, the two continue to needle each-other (albeit now with far less hatred behind it).

Jack can frequently be immature and petty, exhibiting characteristics of an angry teenager or even a child. This is likely due to her having been denied a proper childhood and with it, proper emotional development. Jack not only takes an almost child-like joy in destruction and has poor impulse control, she also frequently lashes out and rages when she does not get what she wants, such as if Shepard takes Miranda's side over her's in an argument, at which point Jack refuses to talk to anyone on the ship for the remainder of the game unless Shepard later convinces her that they didn't mean what they said. Jack is also incredibly foul-mouthed, swearing constantly and in particular using the f-word regularly. This tendency is such that, should Jack be alive in Mass Effect 3, Joker will mockingly ask if Jack keeps a swear jar.

By the time of Mass Effect 3, Jack has mellowed significantly, the positive atmosphere of Grissom Academy giving Jack a sense of belonging and contentment she hasn't ever known before. As such, she is far less irritable and violent than before, having largely matured and become a mostly level-headed teacher who is respected and liked by her students. 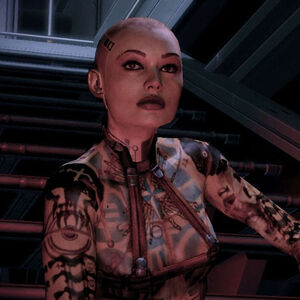 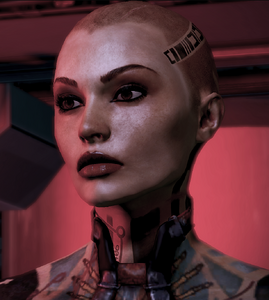 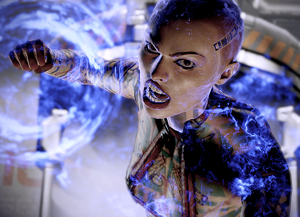 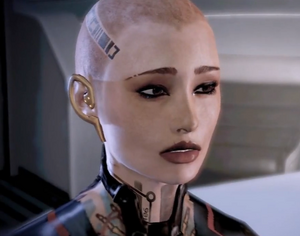 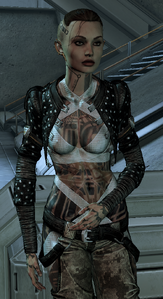 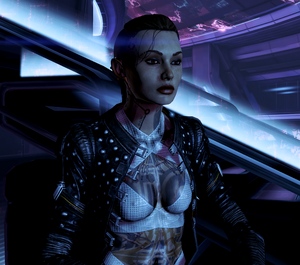 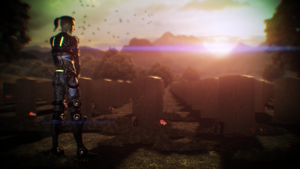 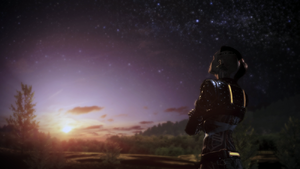 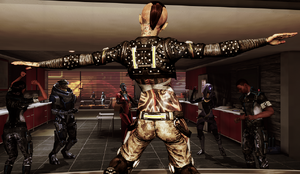