The Stab-Walker (by The Warriors of the Whispering Mountain)

Works in a adventure emporium with his best friend, Nurm

Fighting with his sword
Speaking and translating "Villager language"

Jack is the tritagonist in Season 2 of Minecraft: Story Mode, first appearing in the first episode, Hero in Residence. He is voiced by Fred Tatasciore.

Not that much is known from Jack's personality, but he seems to be a strong fighter and he seems to care and likes to protect his friends, such as his best friend, Nurm. He also blames himself after he remembers the death of his old friends.

Not that much is known from Jesse and Jack's relationship, but Jack trusts him/her enough to go to the sea temple with them.

Not that much is known from Petra and Jack's relationship, but from the trailer of Season 2, Episode 1, Petra seems to be a big fan of Jack. Jack also trusts her enough to go to the sea temple with Jesse, and the others.

Not that much is known from Nurm and Jack's relationship, but Jack seems to be a protector for Nurm and cares about him a lot, even during battles, even If it causes Jack to have a injury, like when Jack got his bad eye (determinant).

Vos was a old friend of Jack's until they got separated when they were adventuring at the Sea Temple, along with Nurm and Sammy. Vos and Sammy died, and this traumatized Jack so much that he threw the map leading to the Sea Temple into a volcano.

Jack and "Vos" were very happy to be "reunited" together. Romeo, while disguised as Vos, also pretends to be worried for Jack when he gets hit in the eye by the Statues that he is controlling (determinant). When the fake Vos revealed himself to be "the Admin" (Romeo) in disguise, this surprised Jack. Romeo also revealed that the real Vos died in the sea temple.

Not that much is known for Jack and Sammy's relationship. But Jack was very upset to see Sammy's inventory, it gave Jack memories when Sammy was attacked by a Elder Guardian in the sea temple. 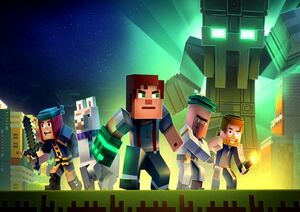 Jack with the Prismarine Colossus, and Male Jesse and his friends in Season 2's cover-art. 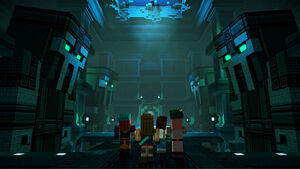 Jack with the fake Vos (who turns out to be "the Admin" later on). 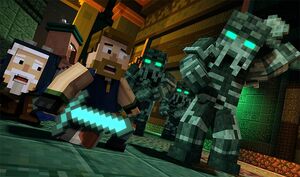 Jack with the fake Vos (Romeo in disguise), Nurm, and some Prismarine Foes. 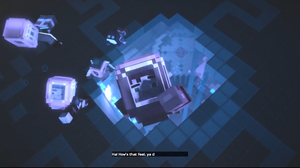 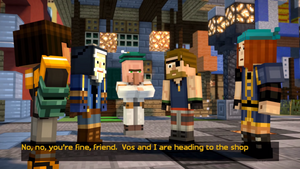 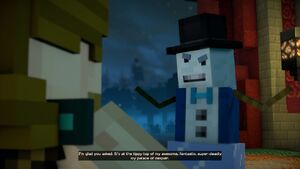 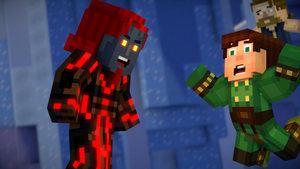