Captain of the Delta Force and Army Special Forces
Case Officer of the Central Intelligence Agency's Clandestine Services
Agent and Director of the Counter Terrorist Unit
Special Advisor to the Secretary of the Department of Defense, James Heller
(all formerly)
Vigilante

Saving innocent people in his home country, as well as some countries around the world
Make peace with his family and friends

Jack Bauer (born February 18, 1966-) is the main protagonist of the 24 series. He was a retired American serviceman and a former federal agent, who was responsible for saving multiple American citizens from potentially devastating terrorist attacks on more than one occasion.

He is portrayed by Kiefer Sutherland, who also played President Thomas Kirkham in Designated Survivor, Athos in the 1993 The Three Musketeers film, David Breckinridge in The Sentinel, and voiced Wayne Slater in The Simpsons, General Warren R. Monger in Monsters vs. Aliens, Samson, Prince Hans/The Nutcracker in The Nutcracker Prince, Big Boss and Venom Snake in Metal Gear Solid V: Ground Zeroes and Metal Gear Solid V: The Phantom Pain.

He took a leadership role in various covert and undercover missions, and served as both Director and Director of Field Operations at CTU Los Angeles. His dedication to keeping U.S. citizens safe allowed him to thwart the terrorist acts throughout all 9 Days; but his dedication led him to make some deep personal sacrifices. Jack lost his wife in the final hour of Day 1, was forced to fake his death and live in hiding (at the cost of a stable relationship with his daughter) in the aftermath of Day 4, sacrificed his freedom for a period of nearly two years after Day 5, became temporarily infected and debilitated by the prion variant during Day 7, and ultimately lost his freedom after Day 9. He showed his willingness to sacrifice his life on multiple occasions, but each time his sacrifice ultimately proved to be unnecessary.

Following Day 8, Jack was forced to flee his country as he was wanted by both the U.S. and Russian governments for killing several Russian diplomats involved in a terrorist conspiracy in revenge for the death of his loved one. After spending four years in hiding in Eastern Europe, Jack resurfaced in London after receiving word of an assassination attempt against his former mentor, President James Heller and a possible prelude to a much more devastating attack. During the course of Day 9, Jack was given a full presidential pardon for the crimes he committed in Day 8, and for any crimes he had committed in assisting President Heller to stop the drone attacks by Margot Al-Harazi; freeing him of his fugitive status in the United States. However, he later surrendered himself to the Russians in exchange for his friend Chloe O'Brian.

Bauer's wife during Day 1. Sometime before, Jack and Teri were separated, with Jack living elsewhere and Teri living at their house with Kim. Both eventually reconciled and Jack moved back in. During the events of Day 1, Jack risked everything to save Teri and their daughter. When Teri revealed that she was pregnant with his second child, Jack was became extremely happy to the point of tears. While Teri managed to survive most of the day's events, she was tragically shot and killed by Nina Myers. Her death and the loss of their unborn child would haunt Jack for years, causing him to quit from CTU and go into a depression. It wasn't until the events of Day 2 that he put aside his grief and went back to work at CTU, but even then he was still affected by her loss. This eventually led him to offer Kim a job at CTU as he did not want to lose her as Teri, going so far as to warn Chase Edmunds, his partner and Kim's boyfriend at the time, that he didn't want to lose her as well. Even after he killed her murderer, Nina Myers, Jack would continue to feel responsible for Teri's death.

Jack's daughter. She had been living with her mother during their separation and when her mother was murdered, she and Jack had a very strained relationship from there on.

Jack's comrade prior to Day 7, where Tony became a domestic terrorist. Their relationship was rocky at first due to them having both had a history with the same woman (Nina Myers), but their bond grew stronger when it was revealed that Nina was a terrorist. Jack and Tony crossed heads frequently but in Day 4 Jack considered him the only person he could trust. Tony was killed, revived in secret, and then became a mercenary in order to kill Alan Wilson for his role in the murders of Michelle Dessler and their unborn child.

A former co-worker of Jack's whom he had a relationship with during his separation from Teri. During Day 1, she was considered to be Jack's most loyal and trusted ally, even going so far as to defend him after he shot her point blank. Their relationship completely changed when she was uncovered as a mole within CTU and murdered his wife and unborn child, causing Jack to quit CTU and go into a depression. Upon seeing during Day 2, Jack became disgusted by the sight of her and made every effort to hold back his desire for revenge as Nina was the only one who could help them locate the nuclear bomb in Los Angeles. Even when she held him hostage, Jack was willing to sacrifice himself in exchange for Nina giving up the presumed location of the bomb. During Day 3, Jack made every effort to hold back his desire for revenge against Nina and tried to convince her that he was done with CTU, going so far as to accept a passionate kiss from her to keep up the ruse. He finally got his revenge as Nina attempted to escape CTU, saving his daughter before coldly executing Nina to avenge his wife's death.

He has had a complicated friendship with Chloe. In the beginning, Jack was prone to using Chloe to engage in unauthorized use of CTU computer resources for Jack without his superior's permission. The relationship was one-sided initially, with Jack using Chloe and demanding that Chloe risk her career on blind faith regarding Jack being right. Chloe would reluctantly follow Jack's demands and ride out the problems they would make for her with her boss when Jack's requests from her yielded the results he promised they would yield. His relationship with Chloe changed dramatically in terms of her willingness to help him during Day 4. When Andrew Paige was kidnapped by terrorists after accidentally discovering vital information regarding their schemes, Chloe turned to Jack for help. However, Jack shocked Chloe when he told her that he was willing to let her friend die rather than risk letting the terrorists know he was onto them. After several minutes of pleading and begging, Jack gave in and saved Andrew. This action led to Chloe becoming completely loyal to Jack, to the point of being willing to be fired from her job at CTU when she refused to stop aiding Jack (who, at the time, was no longer a member of CTU). Chloe walked away from her job (but not before telling her boss she was going to quit anyway) but later that day was summoned back to CTU by Michelle Dessler (who took over running CTU halfway through the day) and asked to return to work since none of the other CTU employees were as skilled as Chloe was. Jack's complete trust in Chloe led her to being one of only four people who knew Jack faked his death, and she has shown great concern for him since, passing information to Jack while in exile, and going to him first when David Palmer and Michelle Dessler were killed.

Since Jack's return on Day 6, she has helped him on several operations which would have cost her her job, including providing schematics to a suitcase nuclear bomb so Jack could hand a component over to the Chinese in exchange for Audrey Raines. In the last episode of the series on Day 8, Jack - on the run once again - asked Chloe to make sure his family was safe. He then thanked her for having covered his back all these years.

During Day 9, Chloe aided Jack once again, but after the Al-Harazis were dead and their plot thwarted, went back to Open Cell though she said it was good to work with him again. Despite this, she still retained loyalty to Jack and aided him again stopping Cheng Zhi, telling Jack that everything that had happened was her fault and she wanted to redeem herself for her mistakes. Despite Jack's reluctance, he agreed to let her help with Chloe claiming she was the only friend he had left. After Chloe was captured by the Russians, Jack willingly turned himself in to them to save her, telling her that she was his best friend and leaving Belcheck to look after her.

A former special agent from the FBI Washington Field Office who later became Jack's love interest in Day 8. Initially, Renee and Jack had partnered up in Day 7, looking for Jack's old friend Tony Almeida, who had resurfaced and was now working with a terrorist organization, despite being presumed dead. She was horrified at his willingness to do whatever it was necessary to follow a lead. However, as the day progressed, she began to see the necessity behind Jack's actions and realized that the only way to bring down Alan Wilson, the main conspirator for the events of the day, would be to act as Jack would have done.

Once Renee was brought in by CTU New York to help deal with the threat of a Russian criminal gang, Red Square, she was reunited with Jack and they became lovers. She was shot at Jack's apartment by Pavel Tokarev, a sniper working for Mikhail Novakovich and Yuri Suvarov, and died in the hospital minutes later. Renee's death affected Jack deeply as they led him on a downward spiral, willing to do whatever it took to get revenge against the Russians and ultimately, made him an enemy of both the Russian and American governments.

A CIA agent stationed in London and Jack's partner during the events of 24: Live Another Day. At the start of the day, Kate was the only one who suspected that Bauer allowed himself to be captured and came close to apprehending him until the intervention of Belchek. She later became one of few people who believed that Jack had come across a plot that Margot Al-Harazi was planning on taking control of ten U.S. military drones and using them for a terrorist attack in the city. While Jack was initially reluctant to trust her, she later convinced him that she really did believe him and that she would continue his work while he was in custody. Impressed by her skills and dedication, Jack later requested her as his partner when he was granted provisional status as an agent.

As a former Captain of the U.S. Army Special Forces and Delta Force, Jack Bauer was described as a brave and daring field operative prior to his enlistment to the Central Intelligence Agency and its specialized program, Counter Terrorist Unit.

Apart from his Green Berets and Delta Force training, Jack received Airborne, Air Assault and Ranger training. In his law enforcement career, Jack had received SWAT training. Jack harbors a unique range of abilities that assist him in his daily life.

Jack Bauer received some awards from his time in the United States Army. His awards include: 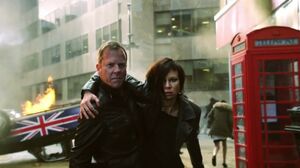 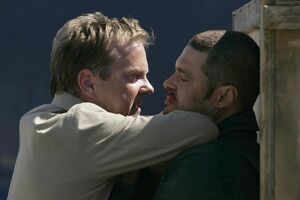 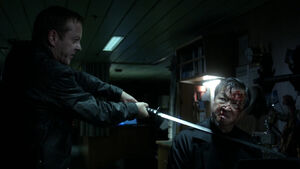 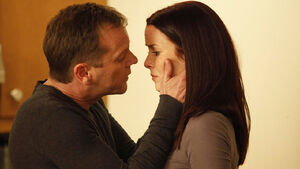 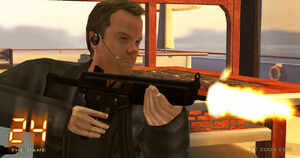 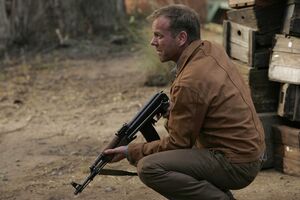 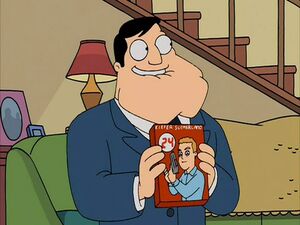 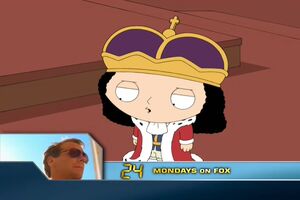 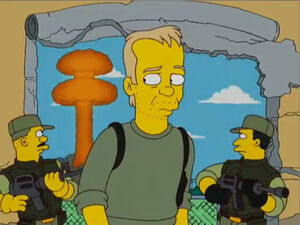 Jack Bauer in "The Simpsons"