Drawing, dancing, traveling, spending time with Rose and his friends.

Reunite with Rose (succeeded in afterlife).

He was portrayed by Leonardo DiCaprio, who also portrayed Romeo Montague in the 1996 film William Shakespeare's Romeo + Juliet.

Jack Dawson was born in Chippewa Falls, Wisconsin in 1892.

It is unknown who his parents were, but they died when he was only 15 years old in 1907, causing him to travel the world.

At some point he met an Italian man named Fabrizio De Rossi and travelled with him around the world.

Jack Dawson boarded the Titanic in 1912, at the age of 20 years old. He was a poor third-class artist and was able to board the ship only after winning tickets in a game of poker against two Swedish brothers who lived in Southampton, Sven Gunderson and Olaf Gunderson, while playing alongside his friend. Jack was able to quickly board the Titanic with his friend, Fabrizio De Rossi, with only minutes to spare before the ship's departure. In his first days on the Titanic, he was able to enjoy his luxury until one day, he found Rose DeWitt Bukater, a beautiful first-class passenger, trying to commit suicide because of her repetitive lifestyle and forced engagement to Caledon Hockley. Jack stopped her and saved her from comitting suicide. On her way back, Rose slipped and despite Jack saving her, screamed out of fear. This attracted the attention of the crew members, who came running to help. They found Jack and Rose sprawled out on the floor together and got Caledon (who was referred to as Cal). Cal attempted to arrest Jack, but Rose stopped him and explained that Jack had saved her. Cal then invited Jack to dinner with the first-class passengers. The next day, Rose went in search of Jack and found him on the boat deck, where they talked for hours about their personal and private lives, as well as Rose's unattainable dreams. Rose then was able to look at some of the magnificent drawings Jack had drawn and was amazed by them. Later that day, Jack showed Rose how to properly spit off of the side of the ship until they were caught by her mother, Ruth, who took Rose to get ready for dinner that evening. Then, Molly Brown, a feisty and kind-hearted passenger, took Jack and lent him a tuxedo originally intended for her son. At dinner, Jack charmed the table with his witty jokes and his fascinating stories about his life. Before he left, he left a note in Rose's hand saying, "Make it count. Meet me at the clock." Rose met him and joined him at a party the crew was throwing, however, they were secretly being watched by Spicer Lovejoy, Cal's manservant.

The next day, Rose was told by her mother that she could not see Jack again, however her mind was soon changed as Cal's horrible attitude and her mother's selfish acts increased. That night, Rose went in search of Jack and they shared their first kiss at the bow of the ship as the sun was slowly setting.

Then, Rose told Jack that she wanted to be drawn nude wearing nothing but her beautiful necklace, the Heart of the Ocean. She stripped down in her suite and posed for Jack. When the drawing was done, Rose put it in Cal's safe. Afterwards, Rose and Jack realized that Lovejoy was spying on them and, although he chased them down the hall, they tricked him and locked him in the ship's boiler room. They then ventured off into the cargo hold and had sex in the backseat of a brand new car, a Renault.

Jack and Rose shared another passionate kiss soon after before feeling the ship lurch. It had hit an iceberg and was slowly going to sink. Rose and Jack went and told Ruth and Cal, although the attempt was only a way to arrest Jack and lock him up. Soon after, Rose found him in a rapidly flooding room. He was chained to a pole, but she used a fire axe to set him free. Tommy Ryan, Jack's newfound friend, and Fabrizio De Rossi then took them to the boat deck. Cal and Jack forced Rose onto Lifeboat 2 to escape the shipwreck, however, in an effort to avoid losing Jack, Rose jumped back onto the ship and stayed with Jack. Cal became angered and chased them through the ship with a gun* (*a handgun, also known as a pistol), intending to kill them.

Jack and Rose escaped when Cal ran out of bullets and could not keep up with them. Rose and Jack then found a young boy crying and waiting for his father to return. In an effort to save him, Jack took the boy, although the father then came and became enraged that Jack was holding his son. He snatched the child and left. Then, two doors burst open because the water's pressure on them was too great, sending even more water onto Jack and Rose, who were already drenched. Their last hope was a terrified steward with a key to a metal gate that could get them back to the top deck, however he dropped the key in the water and ran for his life. Jack retrieved the key and took Rose back up to the top deck. Soon afterwards, all of the passengers were forced to grab onto something.

in an effort to avoid falling off of the ship, which had cracked into two huge pieces. The ship sunk soon afterwards. Jack was able to find a door that had come from the ship floating in the water and let Rose lie on top of it. He could not find anything else and began to freeze in the water.

Jack told Rose that no matter what happened, he did not want her to give up hope and that as long as she stayed on the door, she would be alright and live a long and happy life. Jack died of hypothermia and his body sank to the ocean floor. For some reason there was no record of Jack's existence. Rose was rescued soon after. It is undetermined what Jack and Rose's fate was, but it is assumed that they were reunited in Heaven (which appeared to them in the form of the Titanic had it not sunk) years later when Rose, only days from turning 101, was assumed to have died in her sleep.

Jack and Fabrizio being admitted on board "Titanic"

Jack and Fabrizio waving goodbye to everyone

Jack and Fabrizio at the bow. 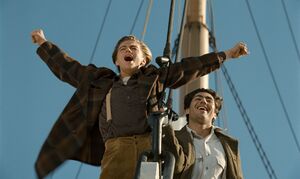 Jack and Fabrizio in the famous "King of the World" scene.

Jack handcuffed to a pipe.

Jack enraged at a guard for not opening the gate.

Jack, Fabrizio and Tommy use a bench to escape.

Jack, Rose, Fabrizio and Tommy search for a lifeboat.

Jack, Rose, Fabrizio and Tommy run down the boat deck.

Jack and Rose reunite at the Grand Staircase.

Jack noticing Cal attempting to kill him and Rose.