Stop Irons and Atlas
(all succeeded)

He was voiced by Troy Baker, who also has voiced Terrance Brooks in Call of Duty: Black Ops, Joseph Allen in Call of Duty: Modern Warfare 2, Joel Miller in The Last of Us series, Booker DeWitt in Bioshock: Infinite, Talion in the Shadow of Mordor series, Erron Black in the Mortal Kombat series, Sam Drake in the Uncharted series, Snow Villiers in the Final Fantasy series, Delsin Rowe in Infamous: Second Son, Jake Muller in Resident Evil 6, Robin in Batman: Arkham City, Red Hood in Batman: Arkham Knight, Orkos in God of War: Ascension, Boss in Saints Row, and many others.

Mitchell was once a Marine that served with his best friend Will Irons, and Sergeant Cormack when North Korea attacked Seoul. After Will was declared K.I.A. after destroying a North Korean gunship, Will's father, Jonathan Irons, President and CEO of Atlas Corporation, offered Mitchell a job and new left arm.

After two months of joining, Mitchell's first mission with Atlas was to rescue the Nigerian Prime Minister and the Technologist, in which he and fellow squadmate Gideon had to chase down a white box truck that the HVI was in. After rescuing the Technologist, Iron congratulated Mitchell, Gideon, and Joker with a glass to them. In 2055, The KVA, a Chechen Anti-Western Terrorist Group lead by a man codenamed "Hades", launches attacks on reactors throughout the world, plunging the world into darkness. After assassinating "Hades", Mitchell learns that Irons allowed the diaster to happen, and joins Sentinel Task Force to stop him.

John Mitchell was born on 16th August, 2027 and was childhood friends with Will Irons although nothing else is known about his history. Mitchell does hint in "Induction" that his "old man" was a leatherneck, meaning that his father was a Marine himself. He also states that he didn't have much of a choice, meaning that he was raised with a father who presumably wanted him to join the marines.

Sometime later he and Will joined the United States Marine Corps and were sent in to South Korea in 2054 to repel the North Korean invasion. Mitchell landed in Seoul where the Korean People's Army had launched an allout massive offensive and he and other Mairnes were sent in to repel the enemy forces. The invasion was repeld but Will was killed in a gunship explosion and Mitchell lost his left arm. He was soon relieved of duty due to his injuries but was given a new robotic arm and joined the Atlas Corporation.

Following his recruitment into Atlas, Mitchell quickly became one of the best operative the Corporation had and befriended Gideon and Ilona, two of the best operatives in the Corporation's military. His first mission was to rescue Samuel Abidoyo, the Prime Minister of Nigeria after he and other technologists were captured by a Chechen terrorist organization called the KVA led by Joseph "Hades" Chkheidze and chased him until he got away. On 28th April, 2055, the KVA launched a massive global terrorist attack against nuclear powerplants and resulted in the collapse of world order and soon Atlas took control of all critical infanstructure of nearly every nation on earth.

Fours years after the attacks, Mitchell, GIdeon, and Joker are all sent in to Detroit where the KVA Second-In-Command, Dr. Pierre Danois was hiding out and went in to capture him and find information on the location of Hades. Pierre then reveals the location of Hades in Santorni, Greece where he is meeting with other members/suppliers of the KVA. Mitchell and Ilona go in and are successful in assassinating Hades, but he gives the former a chip, and states "Irons knows."

Mitchell and Gideon meet with Ilona in the boiler room, and she shows them footage of Irons killing the Technologist, who revealed the KVA's plan to destroy the nuclear powerplants. Irons ambushes them, as Mitchell and Ilona escape after Gideon decides to stay in Atlas to get more information. With the aid of "X", the are able to escape across New Baghdad, and collect the grappling hook. After escaping from Atlas forces, they meet "X", who is Mitchell's former sergeant, Cormack.

Mitchell and Ilona joined the Sentinel Task Force, a group created to stop KVA cells, and later keep an eye on Atlas' rise to power. Going to Irons' private estate in Bangkok, the team infiltrate the place and learn of Manticore, and Cormack and Mitchell are able to attach a tracker onto one of the planes carrying it. In Antarctica, the Sentinels battle against Atlas forces to destroy Manticore, and are able to do so with the aid of Gideon, who defects against the corporation.

Gideon gives them information on the Manticore facility in Bulgaria, and Mitchell goes in with him, Cormack, and Knox. The Sentinels stealthily infiltrate the facility, and destroy all of the supplies before escaping. After Irons declares war on the world, Mitchell and Gideon attempt to stop the destruction of the fleets in San Francisco, and nearly succeed despite the destruction of the San Francisco bridge.

Irons is force to hide in New Baghdad after all nations go against his conquest, and the Sentinels plan a final attack to defeat him. Despite taking the ground of New Baghdad, Manticore is unleashed on the soldiers, and Mitchell, Gideon, and Ilona are not infected (due to being former Atlas soldiers, and having their DNA in Atlas' database). The trio are captured alongside Cormack, and are taken to the Atlas prison camp. Cormack is mortally wounded by Irons, and Mitchell's prosthetic arm is damaged before passing out. Gideon and Ilona rescue them after escaping, and the group escape the camp before Cormack dies.

With no plan, Mitchell and Gideon stage an assault at the Atlas headquarters, donning Goliath suits to get through, and destroy the rockets. After destroying the rockets, their suits shut down, and the duo are forced to fight their way to Irons. Irons shuts down their exoskeletons, and Mitchell is able to get out his, and chases the former to the roof top of the headquarters. Mitchell kills Irons by cutting off his prosthetic arm, allowing Irons to fatally fall to his death. Gideon helps him up, and the two walk as Mitchell states that the war was far from over. 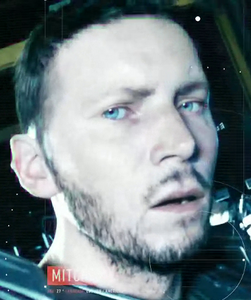 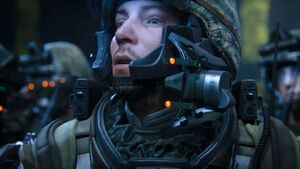 Mitchell in the opening of "Induction". 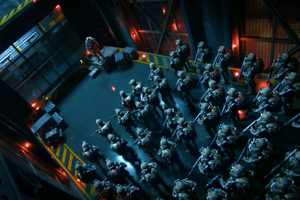 Mitchell and Will listening to Cormack's speech. 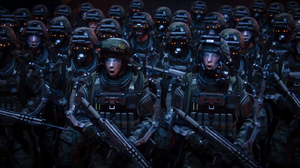 Mitchell with Will in the Marines. 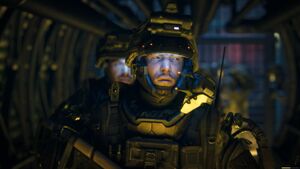 Mitchell and Irons leading the marines to the drop pods. 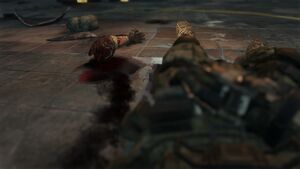 Mitchell seeing his left arm detached from his body. 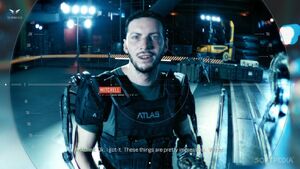 Mitchell on the fly drone. Mitchell with Gideon and Joker. 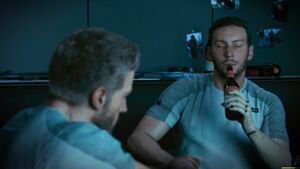 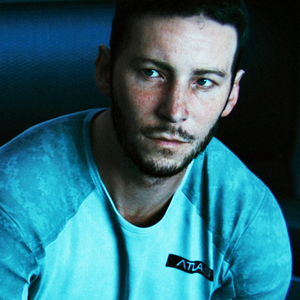 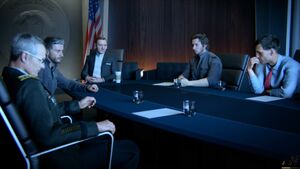 Mitchell with Irons and Gideon in the opening of "Manhunt". 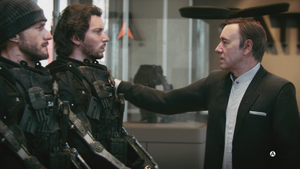 Mitchell with Gideon and Irons. 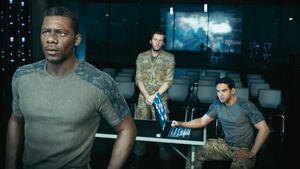 Mitchell with Cormack and Knox in the opening of "Bio Lab". 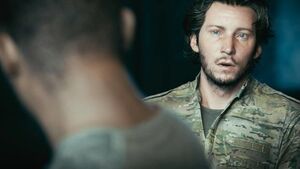 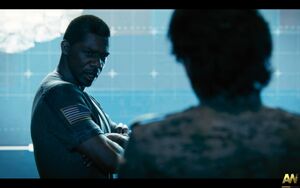 Mitchell speaks to Gideon before going to the bio lab. 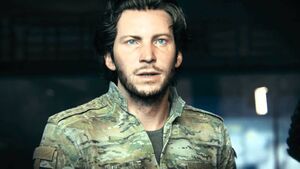 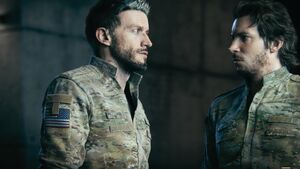 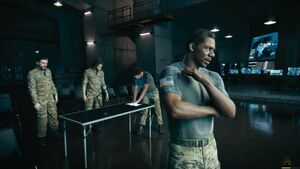 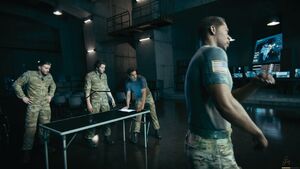 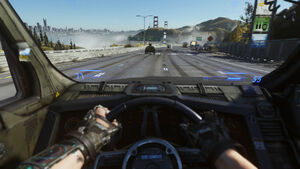 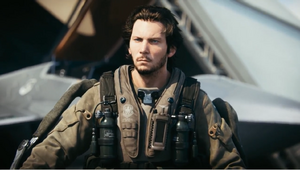 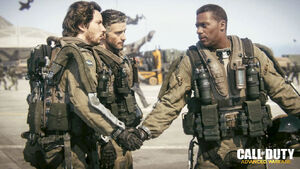 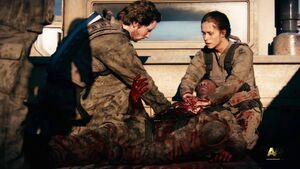 Mitchell with Ilona and Cormack in "Terminus". 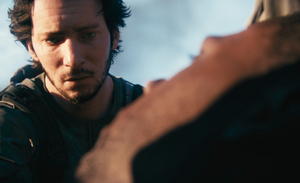 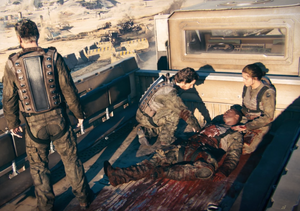 Mitchell mourning the loss of Cormack. 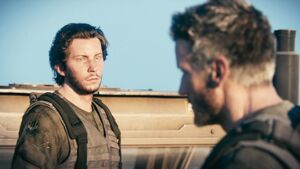 Mitchell asking Gideon if he has any ideas on stopping Irons. 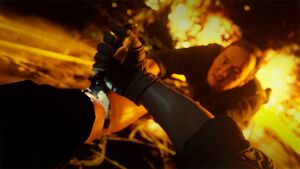 Mitchell cuts off his prosthetic arm, allowing Irons to fall to his death.