Prevent Shendu from freeing his brothers and sisters from the Netherworld.
Find the powers of the talismans before Daolon Wong.
Stop Tarakudo, his Oni generals and the Shadowkhan.
Find the demon chi before Drago.

Jackie Chan is the titular protagonist of the animated series, Jackie Chan Adventures. Despite him being named after the real-life Jackie Chan, his voice actor is different: James Sie. He is an archeologist involved in the hunts of talismans, demon portals, talisman powers, oni masks, and demon chis. In the Japanese Dub of the series he is voiced by Hiroya Ishimaru, who is known for voicing Koji Kabuto.

Jackie is a man in his mid-thirties with an average stature and a "solid" build. His features include a square jaw, wide nose, soft, brown eyes with thick eyebrows, and short black hair. His most common outfit consists of a light blue sweater, tan trousers, and brown running shoes. When his underwear was accidentally revealed, they were pink with a red heart pattern. Jackie is also often seen wearing his archeologist's garb: a white, sleeveless undershirt, khaki button-up long sleeve shirt, cargo pants and a sturdy pair of hiking boots. He occasionally wears a stealth uniform for covert operations, which is a dark gray sweater, black jeans and boots, and gloves.

As a child, Jackie had a much skinnier build and wider eyes. He wore an outfit very similar to his current one. He formerly had a scar on his elbow until Jade traveled back in time and saved him from the fall that gave him the wound, after which the scar disappeared.

Jackie is mild-mannered and conservative in nature. He is cautious and does not like to take unnecessary risks, although circumstances often force him to do otherwise. Jackie is polite and respectful of others, and he is loving and patient towards his uncle and niece. When those close to him are hurt, he often experiences anger and strikes out against his enemies. He is fiercely protective of Jade, demanding that she stay back on missions as they are "too dangerous." Although resourceful and well educated in regards to history and martial arts, Jackie can be too trusting of others, which often leads to trouble. He is generally optimistic and mellow, although when things grow dire he has shown incredible decisiveness.

When Jackie is separated by the Tiger Talisman into two separate beings, his personality changes dramatically. His light "yin" side is a pacifist and innocent in nature, yet weak-minded and too sensitive. His dark "yang" side is fight-loving, selfish, and rude, but possesses more foresight and can be helpful at times.

There is little information available regarding Jackie's past. He moved from Hong Kong to live with Uncle sometime before the age of twelve, similar to Jade's move. He trained in martial arts from a young age, and eventually became interested in archeology. He has worked for a university for several years prior to the beginning of the story's events. He became good friends with Captain Black somewhere along the way, although he has not seen him for six years prior to the events of the first episode.

Jackie is a skilled martial artist and is very agile, but would prefer not to fight evil forces unless he has no choice. Capable of thinking and acting on his feet to make use of whatever is available in dire situations, Jackie is best known for his acrobatic fighting styles, comedic timing, improvised weapons and innovative stunts.

Jackie has an adaptive and agile fighting style, which is based off of Kung Fu techniques. Though he has been defeated by a few enemies (such as Tohru, Hak Foo, and the Dark Chi Warriors) in their first encounters, he is able to adapt to each of their fighting styles in order to defeat them in later encounters.

Only rarely Jackie uses more aggressive fighting maneuvers (such as high-flying kicks), preferring dodging and milder attacks. He uses them mostly against stronger opponents or when he's angry. But his yang form employs them more often.

Jackie has also shown stamina and a certain amount of strength (such as when he carried a bathtub up the stairs on his back, or transported four people's luggage up a mountain.) In one episode Jackie split two stacks of bricks in half, sending a shockwave that rippled through the ground in a short radius.

Arguably, Jackie's greatest assets are his speed and quick reflexes. He frequently catches vases and other antiques from crashing to the floor after Uncle (or other characters) knocks them over, and he has been shown to catch up with speeding cars.

In addition to his prowess in unarmed combat, Jackie has shown great resourcefulness and competitiveness in the use of weapons, often using whatever props that are locally available to aid him in his fights (eg, windshield-wipers, soup ladles, crutches, and even a toothbrush.)

Despite his great fighting prowess and attempts to be cautious, Jackie often acts so recklessly that he often hurts his fists when punching unintended objects (such as a brick wall or a metal pole), or otherwise hurts himself.

He also seems to be rather susceptible to pain as he often yelps loudly when he hurts himself. These instances tend to distract him so that his opponents manage to take advantage of it. 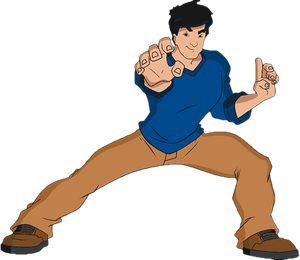 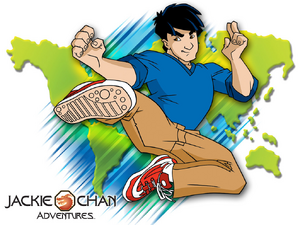 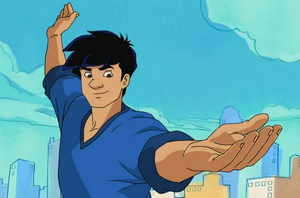 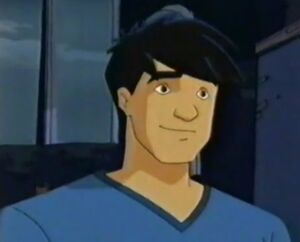 Retrieved from "https://hero.fandom.com/wiki/Jackie_Chan_(Jackie_Chan_Adventures)?oldid=1743693"
Community content is available under CC-BY-SA unless otherwise noted.