Jacks is the main protagonist of Hero of Robots. Jacks is the captain of NASA. He is the pilot of Paladin, Arthur/Avalon Wings, later Sun King Arthur.

Jacks is a tough, brave, and dicipline person, who is responsible for protecting the planet from many threats.

A frequent traveler among different planets, who believes that the Earth is the only pure land in the universe and vows to safeguard the world’s peace. Descendants of military christiany, he alongside his siblings ready to fight against evil. Jacks got mark on his left eye when fight against Dark Army. Even soo, he still want keep peace of Earth. Soon after the final battle of Empire, he was married make love interest with Anna Clarin. From his married, he blessed with 2 childs : Howl & Yuki Anna. Jacks later got selected to become Precident in United States Lamelia. 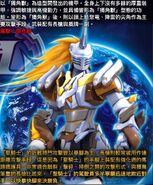 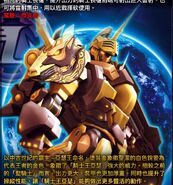 Retrieved from "https://hero.fandom.com/wiki/Jacks_(Hero_of_Robots)?oldid=2239291"
Community content is available under CC-BY-SA unless otherwise noted.