Jackson is Stan Smith's co-worker and friend at the CIA.

Jackson's clone was accidentally killed by Stan Smith in the episode "It's Good to Be the Queen".

He, Stan Smith, Dick Reynolds and Sanders they do missions under the command of Avery Bullock, CIA's boss.

Jackson's grandmother went to Law school in the 1930s, as mentioned in "Shallow Vows".

He have also a son and a sister.

He is voiced by Mike Henry. 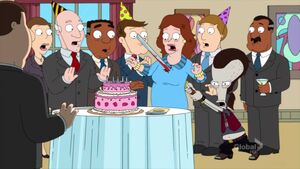 Retrieved from "https://hero.fandom.com/wiki/Jackson_(American_Dad!)?oldid=2030620"
Community content is available under CC-BY-SA unless otherwise noted.