Fixing motorcycles
hanging out with Bella
Being with his Imprint Renesmee

Jacob Black is the tritagonist in the Twilight series. He is the former love interest and best friend of Bella Cullen, Former love rival of Edward Cullen and the Imprinter/Future Mate of Renesmee Cullen.

He is a shape-shifter or "werewolf" of the Quileute tribe, former Beta of the Uley pack, and Alpha of his own. In Twilight, he is fifteen years old, and in New Moon, he phases into a wolf for the first time at the age of sixteen. In Breaking Dawn, he imprints on the hybrid baby named Renesmee Cullen, the daughter of Edward Cullen and Bella Cullen.

On Stephenie Meyer's official website, Jacob was originally just a device to inform Bella about the "Cold Ones." However, both she and her editor liked Jacob so much that they decided to give him a larger role in the sequels to Twilight, making him a main character in New Moon, Eclipse, and Breaking Dawn. He forms a deep bond with Bella in the sequels, and tries to fight against Edward for her love, until she realizes that her love for Edward is stronger and chooses him over Jacob. Jacob subsequently imprints on Bella and Edward's daughter, Renesmee, thus freeing himself from his heartbreak and triangular issues with Bella and Edward.

He is portrayed by Taylor Lautner, who also portrayed Sharkboy, in The Adventures of Sharkboy and Lavagirl.

Growing from 5'10 to 6'7 within one year, Jacob is the tallest character in the series, towering over Alice by nearly three feet and describing her as about the size of one of his arms. Bella notes that he would surely hit his head upon the beams of her new cottage. He is of Native American descent and in Twilight had a lanky build and wore his long hair in a ponytail. Though he looked too tall for his age, he had a hint of childish roundedness to his chin.

Around the time when he started to phase, his body grew tremendously thick, toned and muscular, similar to that of a serious bodybuilder, though balanced by his tremendous height so he doesn't look out of proportion. In New Moon, upon discovering his shape-shifter powers and joining the Quileute pack, he crops his long black hair short. Later he grows it out to chin length in Eclipse because he thinks Bella prefers it longer. He cuts it short again in Breaking Dawn. Jacob is also said to be extremely handsome, with dark good looks, raven-black hair, russet skin (which Bella was rather jealous of at times) and deep-set twinkling dark brown eyes; Bella once described him as "sort of beautiful".

As a wolf, Jacob is about 10 feet in length, has russet brown fur, dark intelligent eyes, and is very swift. He was also the second fastest and the second largest in Sam's pack. He later grows to be the largest and strongest, but Leah Clearwater is still faster than him. Sam acknowledged him as the pack's strongest fighter. Bella is still amazed that Jacob did not take the role of Alpha in Sam's pack, though he eventually creates his own pack after Sam decided to kill Bella to prevent Renesmee from being born.

Jacob's personality changes throughout the books as he matures. In Twilight, he seems very friendly though shy and slightly sheepish around Bella, easily succumbing to her flirtations and worrying about how the Quileute legends will affect her perception of him. However, in New Moon Jacob goes from being his old, happy self to being sullen and temperamental. This is because he has now phased and is experiencing life in wolf form. In New Moon, his cheerful attitude is what attracts Bella and make her feel better.

He is one of two who dislike being wolf the most and wants nothing more than to be rid of his magical inheritance, but learns to adapt to the idea. When he first joined the pack, Sam wanted him to lead it, but he refused and gave the responsibility to him instead.

In Eclipse, he becomes a lot more confident that Bella is really for him - so much that he makes her realize that she does love him after all through means of trickery. He also seems to be somewhat rebellious, since he encourages Bella to sneak out to visit him and they ditch school so they could spend some time alone, even though just as friends. In Breaking Dawn, his personality changes yet again, to slightly violent and pessimistic, as he feels like Bella is going to die due to her unnatural pregnancy. He is ready to kill her baby daughter, Renesmee, until he imprints on her. After this and Bella's successful transformation into a vampire, he returns to his cheerful personality as he no longer feels the pain of Bella's rejection.

During free time, he enjoys rebuilding automotive vehicles, hanging out with his friends, and playing with Renesmee. He also has an interest in watching action movies and commenting on bloody scenes.

Generally, Jacob is very friendly, playful, carefree and caring towards the people around him. He would go to any extent to protect those he loves most, most obvious in Breaking Dawn when he disbands from his pack and sacrifices everything to protect Bella. He is also shown to be somewhat sarcastic, slightly obnoxious and slightly childish, and has a hot-headed temper due to his wolf side and highly dislikes the scent of vampires. He was also very hostile toward Edward, even before he phased, only because they were both in love with Bella, but they eventually come to terms with each other. After embracing his right as an Alpha and imprinting on Renesmee in Breaking Dawn, he begins to take the responsibilities of leading his renegade pack more seriously.

Imprinting: Shape-shifers can involuntarily imprint, a method of finding a soul mate. When a werewolf imprints, it seems as if time stops and gravity doesn't hold them to Earth, anymore. They are instead held by the person they have imprinted on. A werewolf cannot control the outcome of imprinting. For example, Jacob tried unsuccessfully to force himself to imprint on Bella. If an imprintee dies, the shape-shifter might go insane or kill himself.

Jacob's father is Billy Black, and he has twin sisters, Rachel and Rebecca. Billy and Jacob seem to be pretty close as they have lived alone together for a fairly long time. On the other hand, Rachel, Rebecca, and Jacob are not as close as the twins live out of town and rarely see their brother. His mother, Sarah Black, died in a car crash when he was 9 years old.

Bella Cullen is the best friend and former love interest of Jacob Black. Throughout the entire twilight series up until Jacob imprints on her newborn daughter, he is love with her and tries many times to convince and persuade Bella to leave Edward and choose him. Jacob has a problem with understanding the idea of consent and being a little bit too forward, so he works on figuring that out. He protects her from Victoria when Edward leaves her and helps defeat the newborn vampire army that is sent to kill her. As they prepare for the battle to stop the vampire army Jacob Kisses Bella which makes her realize that she's also in love with Jacob but her love for Edward is more strong.When Bella married Edward he accepts that she will always be his best friend and will love him but just not the way he wants. After after Jacob Imprints Renesmee he finally understands why he and Bella never happened, he was destined to be with her daughter. It turns out, he was just in love with the eggs inside Bella that was just future Renesmee. Which explains why for the week leading up to the wedding he was oddly attracted to Edward...

Renesmee Cullen, Bella and Edward Cullen's daughter, is the object of Jacob's imprint, and so his soulmate.

In Breaking Dawn, when Bella became pregnant with Renesmee, Jacob was repulsed because he saw her baby as he saw Edward: a monster.

Jacob made his hatred for the baby clear on multiple occasions, including when he became angry at Bella for saying the baby reminded her of him. Despite his hatred towards the baby, Bella and Jacob were incredibly drawn to each other.

Bella nearly died giving birth to the baby, who she named Renesmee. During Bella's transformation into a vampire, Jacob believed that she had died, and went to kill Renesmee. But when they looked into each other's eyes for the first time, he imprinted on her. He then realized why he was so pulled toward Bella during her pregnancy, and why Bella was so pulled toward Jacob: because Renesmee was a significant (due to the similarities between her and her mother as a human) part of Bella.

By imprinting on Renesmee, he has found what he needed to overcome his pain and sadness. While Renesmee is a child, he only feels the need to protect her and keep her happy as nothing else is more important. Because of this, he deserts his initial plan to live his life as a wolf and dedicates himself to protecting her. As she grows up, Jacob will feel attracted towards her as part of the imprinting. It is implied that Renesmee will "accept" Jacob as her mate when she is old enough, since she loves him very much, but it is yet unknown whether this will happen. Bella isn't very happy about this at first, and at one point attacks him, an effect of her temper as a newborn vampire. As time passes by, she comes to accept it later on when she realizes that it's not her choice, that they were made for each other.

Jacob thinks of Renesmee as "the most wonderful person in the world", and Renesmee is very possessive of him. In addition, he is magnetically drawn to her, as demonstrated many times throughout the story.

Because he finds it hard to be away from her, he visits the Cullens every day to play with her, though he would argue with Rosalie about whose turn it is to feed her. He is the one who nicknames her "Nessie," saying to Bella that her full name is a mouthful. When Renesmee was misunderstood by a vampire named Irina to be an immortal child and reported her to the Volturi, Bella secretly arranges ID certificates, a driving license and passports for Renesmee and Jacob, knowing that he will definitely protect her if the Volturi come looking for them. She also wanted to send them to Rio, hoping Alice would be able to find them. On Christmas Day, Jacob gives Renesmee a hand-braided bracelet which is the Quileute's version of a promise ring as Christmas gift.

After the tension between the Volturi and the Cullens ended, Jacob is more than happy to have Renesmee back into a normal childhood. 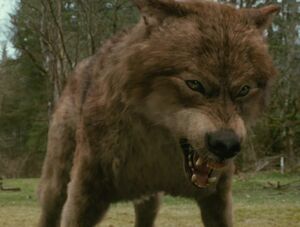 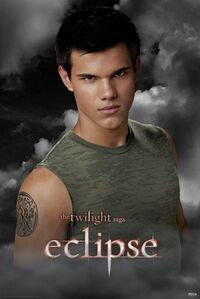 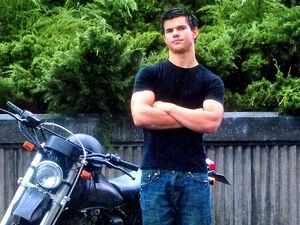 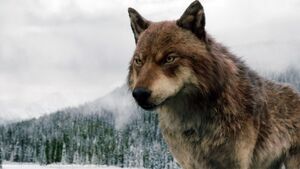 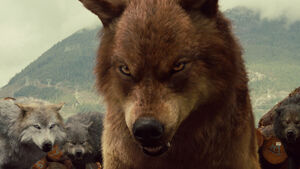 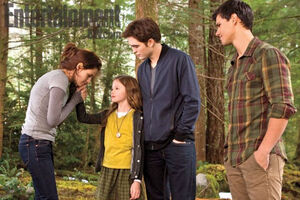 Retrieved from "https://hero.fandom.com/wiki/Jacob_Black?oldid=2221314"
Community content is available under CC-BY-SA unless otherwise noted.