Master Assassin of the British Brotherhood

Protect the people of London (both succeeded).

Sir Jacob Frye is one of the two main protagonists of the 2015 video game Assassin's Creed: Syndicate, and an Major Character in its follow-up DLC Jack the Ripper.

He was a British Master Assassin and leader of the Rooks active in London during the Victorian era, and is the younger twin brother of Evie Frye. He later became a member of Queen Victoria's Order of the Sacred Garter and the Ghost Club. Though impulsive and reckless, Jacob was dedicated to the Assassins' cause in fighting against the Templar Order, and managed to break the orders control over London.

He was voiced by Paul Amos.

Jacob Frye as born on November 9th, 1847 to Ethan and Cecily Frye, and was born four minutes after his twin sister, Evie. Due to their mother dying from childbirth, the twins were raised by Ethan and their grandmother, and were trained to be assassins like their father. Jacob dismissed his assassin education, as he wanted to explore and stay out late, but Evie continued to be trained. Ethan would pass away from natural causes in 1868, Jacob and Evie were further trained by George Westhouse, and prepared them to execute certain targets for the British Brotherhood.

The twins traveled to Ferris Ironworks with Westhouse to assassinate Rupert Ferris and David Brewster, who were two members of the Templar Order. Jacob was then tasked to eliminate Ferris, and managed to do so killing him on a train before having to escape from the train crash. After killing the two, the twins wanted to liberate London free from the Templars' control, but were warned not to do so by Westhouse and the Assassin Council. The two decided to go to London, hitching a train to London and met with Henry Green, who was the remaining assassin there. Jacob then proposed to Evie that they created a gang to challenge the Blighters in London, and decided to name it the Rooks.

Jacob and Evie would meet and befriend Charles Dickins and Frederick Abberline, and also help liberate children from the local factories that were being abused for Clara O'Dea. With new allies and O'Dea's access to her child informants, allowed them to assassinate Rexford Kaylock and defeat his Blighters. The twins managed to take over Kaylock's personal train and Whitechapel from the Blighters, which gave them the service of Agnes MacBean. Additionally, Jacob and Evie would meet the inventor Alexander Graham Bell, who would and craft inventions for the twins to use. Though the twins were dedicated to the cause, Jacob was motivated to strengthen the Rooks to assassinate Crawford Starrick and his allies, as Evie wanted to find the Shroud of Eden to prevent the Templars from claiming it.

Despite their differences, Jacob would assist Evie in finding the cargo of Lucy Thorne, but were forced to leave it after they were chased by Blighters. Jacob then went to investigate the source of the soothing syrup crafted by Starrick, and was given a document on the batches from Charles Darwin when infiltrating the Southwark Foundry. The document revealed that the syrup was being taken to the Lambeth Asylum, and managed to get the creator of the syrup's name from asylum owner, Richard Owen. After helping Bell recover cable lines from the Blighters, Jacob returned to the asylum and saw John Elliotson, the creator of the syrup, who was experimenting on patients. Frye assassinated Elliotson, and later worked with Bell on trying to prevent Starrick from spreading false information by telegraph. He then decided to work with Starrick's competitor, Pearl Attaway, who tasked him with assassinating her rival Malcolm Millner. Upon killing Millner, Jacob learned from him that Pearl was related to Starrick, and then listened on a meeting between the two. He learned that Pearl is the cousin of Starrick, and that she was going to return the engine that Jacob stole to him at a train station.

Jacob decided to eliminate Pearl at the station, and continued to disrupt the boroughs of London to eliminate the Blighter's control. Jacob then helped Abberline to target the templar who was operating the financial field for Starrick, and his investigation led to him learning that the bank's governor, Phillip Twopenny, was a Templar. Jacob then assassinated Twopenny while he was robbing the bank with his men, which nearly resulted in the fall of British currency and false goods. After eliminating the Templar, Jacob went to locate his next target, and met with the Disraeli's to locate James Brudenell, the Earl of Cardigan. After learning of James' identity, he assassinated him at the palace of Westminster. After eliminating Brudenell, Frye was given an invention to meet with Maxwell Roth, who was a the leader of the Blighters. Roth wanted to work with Frye so they could hurt Starrick's business, and destroyed most of his products and goods, and kidnapped three of his henchman.

When preparing to destroy a building, Jacob saw children enter and attempted to tell Roth not to go with his plans, but Maxwell told him that destroying Starrick mattered. Though Jacob failed to stop the destruction of the building, he managed to rescue all of the children there before they could be killed. Afterward, Roth gave Jacob a latter and gift, which held the corpse of his bird. Seeing that Roth was a brutal criminal, Jacob decided to assassinate him at the Alhambra Music Hall. Frye succeeded in doing so, and barely escaped from the burning building with some of the guests. Returning to the train, Jacob got into an argument with Evie, who told him that they were done once they've eliminated Starrick.

Jacob and Evie worked together to eliminate Starrick at Queen Victoria's ball at Buckingham palace, and were assisted by Abberline, the Disraeli's, and Green. Upon killing Starrick, Jacob and Evie reconciled and were knighted by Queen Victoria for stopping Starrick's scheme to kill her. The twins helped Victoria stop the Templars in London from destroying Parliament, but ended their partnership with her to stop get involve with Britain's imperialist ideas.

Jacob was abducted by Jack the Ripper, who was previously one of his apprentices known as "Jack the Lad", and was placed underneath the Lambeth Asylum. Evie went to investigate and managed to stop Jack and his gang, and rescued Jacob from the asylum after Jack's defeat. To prevent the identity of Jack being exposed, Abberline obscured this, which caused Jack to be known an infamous killer in London for generations. 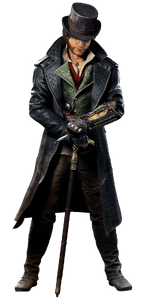