Jacob Fuller is one of the heroes of the 1996 Horror-Comedy, From Dusk Till Dawn.

He was played by Harvey Keitel. 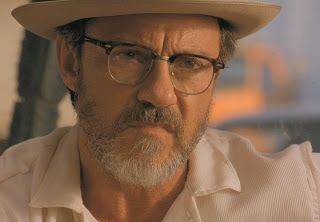 A reverend, who is going through losing his faith experience, talks to Kate Fuller and explains why he's going through religion loss you know. Later he, Kate Fuller, and Scott Fuller check in the same motel as the Seth Gecko and his brother, Richard "Richie" Gecko, who realize that the Fullers are their ticket out and their freedom. Their plan in kidnapping succeeds and the Fullers take the Gecko Brothers to the border in their RV. Seth Gecko makes a deal with them that if they keep their word of not trying to escape and not double-cross them that they will let them go the next morning. The Fullers agree and after an inspection by a border guard, they cross into Mexico, where they stop at the strip club and brothel, The Titty Twister, and the destination where Seth Gecko and Richard "Richie" Gecko are going to meet their contact, Carlos, in the morning.

When they enter the Titty Twister, originally the bartender says to them that they can't come in here that Titty Twister is just for truck drivers but he agrees to serve them when Jacob explains to the bartender and proves to him that he is a truck driver. They drink and watch the Titty Twister's most popular performer, Santanico Pandemonium, who is really a vampire, along with most everyone else in Titty Twister. She attacks Richard "Richie" Gecko, who later turns into a vampire, and the workers, strippers, and band turn into vampires as well. Later Jacob becomes the voice of reason to Seth Gecko and the rest of the non vampires and Seth explains that Jacob being once a preacher is their best defense and weapon against the vampires and that he's gotta believe again, which Jacob does.

Retrieved from "https://hero.fandom.com/wiki/Jacob_Fuller?oldid=1784998"
Community content is available under CC-BY-SA unless otherwise noted.