Jagen is a character from Fire Emblem, he is a veteran knight who is mission his protect marth from Gra soldiers.

he is voiced by Walden James.

he can use lances and swords to kills enemies.

Mystery of the Emblem

Jagen is a playable unit in the gacha mobile game, Fire Emblem Heroes.

in Super Smash Bros. Ultimate, Jagen appears as a primary shield-type spirit, His spirit battle is against Ganondorf on the throne room of the Castle Siege Stage.

Jagen's Artwork from Fire Embelm: Shadow Dragon and the Blade of Light 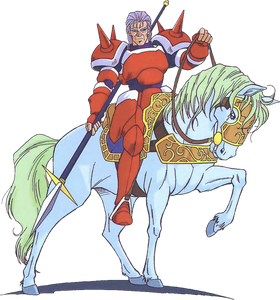 Jagen's Artwork from Fire Emblem: Mystery of the Emblem

Jagen's Artwork from Fire Emblem Heroes
Add a photo to this gallery
Retrieved from "https://hero.fandom.com/wiki/Jagen?oldid=1765171"
Community content is available under CC-BY-SA unless otherwise noted.