Code Breaker
Co-Manager of the Emojis

Hanging out in the shack.

Get out of Alex's phone (formerly).

Heroic Criminal
Jailbreak, who is really Princess Linda (👸), is the deuteragonist of The Emoji Movie. She helps Gene to fix his own mistake by entering Firebox. She is the only emoji who wears clothes that no other emoji wears. She doesn't know how to dance while entering the Just Dance app.

She was voiced by Anna Faris who also voices Sam Sparks from Cloudy with a chance of Meatballs series, Jeanette from Alvin and the Chipmunks series, and portrays as Cindy Campbell from the Scary Movie franchise and as Rachel Johnson from Yogi Bear (2010).

Jailbreak is a light yellow emoji with a black beanie and with her light blue code breaker watch. She has blue hair, golden eyes, pink cheeks, purple lipstick and wears a black dress, skinny tights and long black boots.

When Jailbreak takes off her beanie, she has straight and long brown hair, and also wears a shiny, golden crown, with a little blue jewel embedded in it.

Jailbreak is a code breaker emoji, that can help Gene and Hi-5 find the source code. She can also uses her code breaker watch to solve any code, that she can find, in any problem, that she can handle, in a nick of time. Also, her real name is Linda. Tough, pretty, sly, sarcastic, compassionate, beautiful, and gorgeous, this girl emoji, can hack her way, into anything.

Jailbreak hopes of one day, leaving the phone, to live on the cloud, to live by her own rules. But, Jailbreak's plans get derailed, when she has to help Gene and Hi -5, who also want to get to the cloud, and when she unexpected develops romantic feelings for Gene. 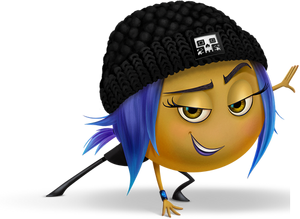 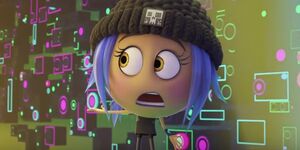