Hero
Adventurer
Clown (once a month, only his tail)
Queen (formerly in "The Silent King" and "When Wedding Bells Thaw")
Father (to 5 pups)
Nice Knight (formerly in "Loyalty to the King")
Pretend Milk Man (formerly in "Princess Cookie")

He was voiced by John DiMaggio, who also voiced Bender Bending Rodriguez in Futurama and Fu Dog in American Dragon: Jake Long. In the Japanese dub from the series, he was voiced by Shirō Saitō.

Jake was conceived when his father, Joshua, was driving a pickle wagon during an investigation with his wife Margaret. During the investigation they were attacked by a strange blue creature with multiple eyes, and it bit Joshua. Jake was later born from the pustule on his father's head from the creature's bite and was taken by Joshua and Margaret to live alongside their natural-born son Jermaine. It is inferred that Jake's Stretchy Powers that he has had since he was a puppy are a result of his biological relationship with the shape-shifting creature although according to him (in the episode "The Witch's Garden"), he rolled around in a magical mud puddle when he was a puppy then just became a magical dog. Little is known of Jake's past with his family, but for a while he was known to be a successful criminal until he retired to take part in a more respectable life as an adventurer with Finn, later settling down with Lady Rainicorn to become a father.

Jake's Stretchy Powers enable him to modify the size, shape, and dimensions of every part of his body. Not only can he stretch and contort himself into highly specific forms, but he can also rearrange his internal organs, bones, and teeth. In "Evicted!", he was able to shrink and move his internal organs and blood into his left thumb. Also in "Jake vs. Me-Mow", he enlarged his liver 51 times a dog his size, preventing him from succumbing to Me-Mow's poison. One frequent use of his powers is Key Hand, which he uses to pick locks. He has also used his arm as a bow able to accurately shoot arrows at a short distance.

Although he lacks the zeal for fighting that Finn possesses, Jake is a capable fighter. What he lacks in Finn's talent for swordsmanship, he makes up for in toughness and magical brawn. He is a capable hand to hand fighter, and can transform his limbs into weapons. He can also stretch to entangle enemies, or grow to gain a height and weight advantage. His shapeshifting can grant him supernatural strength, allowing him to simply overpower his enemies. However, Pendleton Ward has said in an interview that Jake uses his powers lazily and does not know their full extent, often hindering Jake's effectiveness in combat. Despite stating outright that he's multiple times stronger than Finn, Jake often leaves the brawling to his adoptive brother.

As shown in "Mystery Train", Jake is also able to stretch himself to "create" an entirely new person, as long as they remain connected to him. In "You Made Me," he is shown to be able to move objects through his body freely when he lets Princess Bubblegum jump into his mouth and then pushes her up through his back. Jake can be stretched by force as seen in "Ocean of Fear", when Finn stretched Jake's ears to avoid making contact with the ocean and in "Beautopia" when forced into a paddle. Jake's powers are sometimes used against his will, as in "Power Animal" where Jake's stomach took the shape of a fist and punched him so that he would wake up and eat.

Jake's stretching ability is subject to the principle of conservation of mass as seen in "The Limit". However, the ratio at which he retains mass is different than what applies to other masses in Ooo. It is revealed that while Jake can stretch his body to incredible lengths, his body could be pulled so long that it becomes dangerously thin. Once his mass is distributed along a certain length of his body, it becomes difficult for him to support himself; at one point, Jake was forced to walk along the ground. If he were to stretch beyond his absolute limit, it is presumed that he would completely thin out and die.

Without his magical powers, Jake is rather weak and can barely even run, as seen in the episode "The Witch's Garden". In the same episode, Jake claims to have obtained his powers by rolling around in a magical mud puddle as a puppy, but in an interview Pendleton Ward stated that this is not how Jake got his powers, he just could not remember. It is likely that Jake's amorphous powers come from the same creature that bit his father's head in "Joshua and Margaret Investigations," though this is unconfirmed.

Being a magical dog, Jake has an acute sense of smell, as he can apparently smell the precise location of an object miles away. In "The Chamber of Frozen Blades" he stated that his sense of smell is "1,000 times better" than Finn's, although compared to normal dogs this is a low estimate, suggesting that he was either just guessing, or his sense of smell is similar to that of an average dog. He also claimed in "The Enchiridion" that he could not only smell the book, but also that it was in a room inside of a castle.

He also owns a sword, a shield and an axe but seldom uses them in combat. In "Mystery Train," when disguised as the Conductor, he briefly uses a sword to fight Finn, who defeats him effortlessly. During the same time, he also displays a prowess for skateboarding, as he performs jumps, ollies, and grinds, several atop a moving train.

Jake also has a supernaturally powerful imagination (on the verge of having psychic powers) as seen in "Rainy Day Daydream". Anything he imagines becomes reality; however, only he can see his own creations. 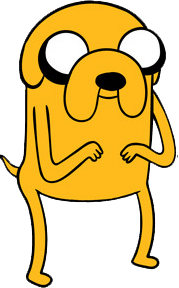 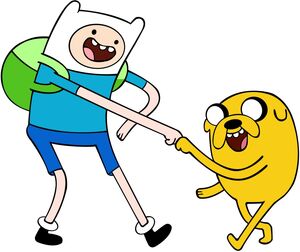 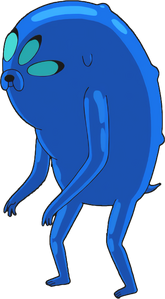 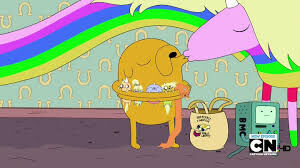 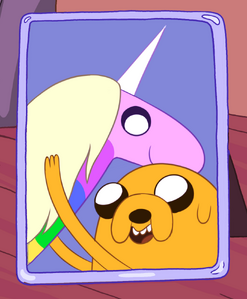 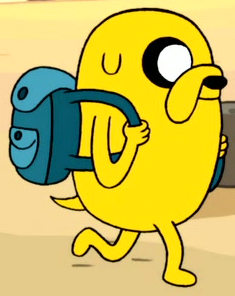 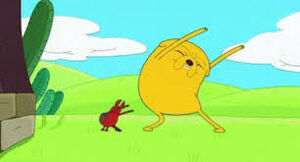 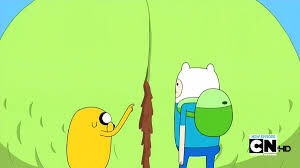 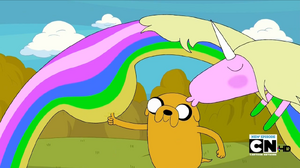 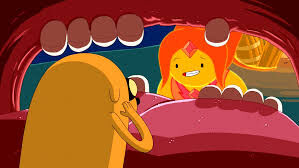 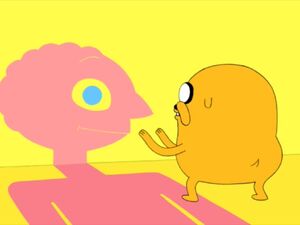 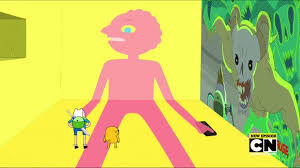 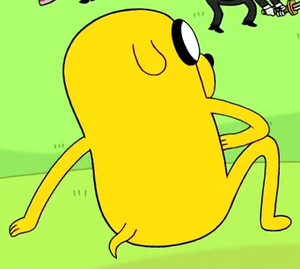 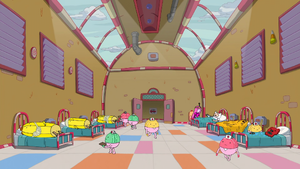 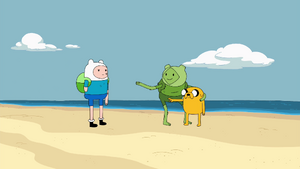 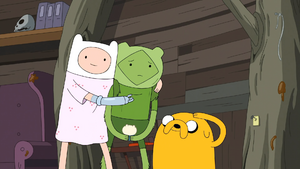 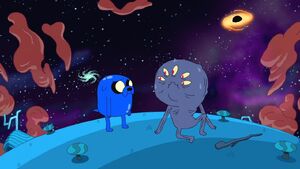 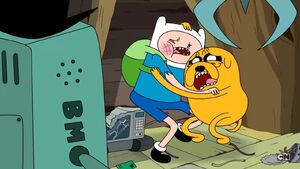 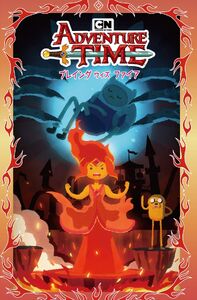 Retrieved from "https://hero.fandom.com/wiki/Jake_(Adventure_Time)?oldid=2240964"
Community content is available under CC-BY-SA unless otherwise noted.