The President of the Turkey Freedom Front (self-proclaimed)

Athletic, can use his wings and talons to attack others, can time travel with the help of his taken machine

Jake is the deuteragonist of the 2013 animated comedy Free Birds. He is the President of the Turkeys Liberation Front. He is a determined nad somewhat insane turkey who forces Reggie to come along with an insane mission: go back in time to make sure turkeys are not part of the first Thanksgiving. Through foolhardiness and luck, the pair manage to take an experimental time machine to do just that. During their mission, Jake and Reggie's preconceptions of the world and themselves are challenged forever in a conflict from which the world will never be the same. He was voiced by Woody Harrelson.

Jake is a muscular turkey with red crown feathers. His body feathers are black to brown and he is an impressive specimen of his species. He has blue eyes.

Jake is determined, if a bit dimwitted. He is loud, energetic and very touchy with no regard for personal space. Jake is competitive, a bit annoying, but golden at heart.

Jake was born on a turkey factory where the turkeys are artificially enhanced and fattened up with chemicals and whatsuch. He was hidden from the scientists by his mother. This explains why, as an adult, he is so unusually large. As a poult, he was small enough to squeeze through the bars of his cage and does so at the behest of his mother, carrying eggs with him, tasked with starting a new, free flock. While on the road to free, he meets The Great Turkey (who is actually Reggie) who gives him the mission of stopping Thanksgiving from featuring their kind as the main course.

Shortly after becoming the pardoned turkey, Jake finds and kidnaps Reggie from his home with the President's family. He takes Reggie back in time via a stolen top secret time traveling machine and the pair to the first thanksgiving. They and a local tribe of turkeys working together get themselves off the menu. While there, he finds a rival in Ranger. 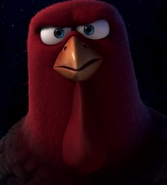 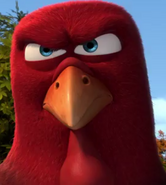 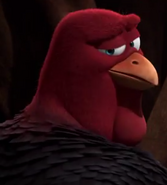 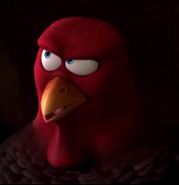 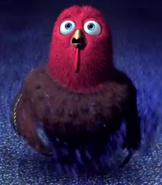 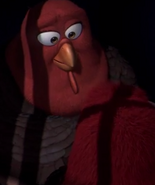