Hanging out with his friends
exploring the lands beyond Never Sea

Jake (later known as Captain Jake) is the main protagonist in the Disney Junior animated series Jake and the Never land Pirates. He is a boy who is given a wooden sword from Peter Pan.

He was voiced by Colin Ford in Seasons 1-2, the late Cameron Boyce in Seasons 2-3, Sean Ryan Fox in Season 3-4, Riley Thomas Stewart the early part of Season 4 and Gabe Eggerling for the rest of the series. In the Japanese dub from the series, he was voiced by Hiro Nakajima.

Jake wears a red bandanna, a blue and yellow vest, a pair of brown boots with the capital letter J, a black belt, a white shirt, and two blue shorts. He is eight years old.

Jake, along with Cubby and Izzy, talks to the viewer about going on adventures across Never Land discovering new things. However, he dislikes the devious plans done by Captain Hook to foil the plan while on their adventures. Jake also gets help from other characters such as Peter Pan, the mermaids of Mermaid Lagoon, other residents of Never Land, etc.. Jake always has his sword to protect himself from the dangers of Never Land.

Jake and Skully The Parrot 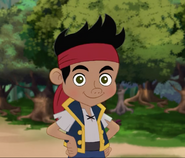