Jake has a huge crush on Gia. One day at school, Jake goes to Ernie's brain freeze to buy 2 ice cream cones for himself and Gia, he, Troy, Noah and Gia were teleported by Gosei to defend the Earth from the Warstar Aliens.

One day, while flirting with Gia, the discovered that the Alien Ships were capturing other humans. He and Gia had to call the other Rangers to help free the humans that were captured by Yuffo. After the battle, he and Gia had complimented on how they worked together as a team.

After a new threat entered Earth, Gosei presents to them with their new power, the Super Mega mode and Jake realizes that the color of the key is different, but Gosei gives him an explanation and the Rangers had to fight the Armada.

He and Emma met Casey Rhodes the Jungle Fury Red Ranger and Casey teaches them how to fight without weapons and learn how to channel their inner animal spirits in order to defeat a monster with magnetic abilities.

When the Mega Rangers were confronted by Damaras, Troy is kidnapped and Noah, Gia, Emma and Orion are injured. Jake realizes that he is the only one left to save Troy and Jake manages to save Troy and defeat the Armada by letting Tensou free Troy while Jake is creating a distraction for the Armada. Eventually, the rest of the Mega Rangers are recovered and rejoin Jake and Troy as they finally defeat Damaras. 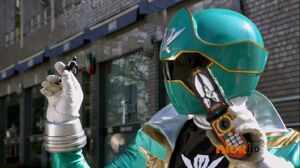 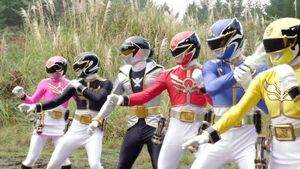 Go Go Megaforce
Add a photo to this gallery

Retrieved from "https://hero.fandom.com/wiki/Jake_Holling?oldid=2121320"
Community content is available under CC-BY-SA unless otherwise noted.