Heroes Wiki
Register
Don't have an account?
Sign In
Advertisement
in: Rewrite, Articles under construction, Movie Heroes,
and 13 more

Chatting with Charles or Patricia

He is portrayed by Liam Hemsworth, who also played Billy "The Kid" in The Expendables 2 and Gale Hawthorne in The Humger Games film series.

Jake Morrison lived in Los Angeles. During the War of 1996, Jake avoided the city's destruction due to being sent on summer camp outside of the city. He was also present to witness the Black Knights' disastrous counterattack against the L.A. City Destroyer. After the war, Jake was orphaned as his parents were unable to escape from L.A.

Jake spent his life living in an orphanage. Despite his losses, he was not without hope. He befriended fellow orphan Charles Miller after saving him from local bullies. Jake was also inspired to become a fighter pilot.

Enlisting in the ESD

By 2004, Jake worked part time as a mechanic while trying to enroll into the STEP academy entrance exam. Within a year, he finally achieved in his enrollment to a STEP academy in Nevada. Furthermore, Jake decided to take Charles with him. There he met and befriended Dylan Dubrow-Hiller and fell in love with Patricia Whitmore, the daughter of former President Thomas Whitmore.

By 2013, Jake was applied to the ESD Academy and becoming a potential candidate for Legacy Squadron.

Jake was stationed on the moon where they are installing another new space weapon on the moon base but when something went wrong Jake saved the moon base from being crushed but was grounded until further notice because of his mistake. He later confronted Dylan and got punched in the face but told his boss that the floor was slippery rather than reporting an assault charge. He later on picked up Director David and flew to the moon where a ship that got shot down was located at. Jake then collected the item that was founded and retreated to Area 51 where he later joined Dylans squadron in attacking the alien queens ship. During the battle the queens ship was too heavily defended so Jake proposes the idea about leading the squadron into the queens ship but the Queen knew they were coming and unleashed an EMP attack that caused the fighters and bombers engine failure. Jake told command to detonate the bombs and told Patricia that he loved her but the bombs were contained in an energy shield. Jake later woke up after being ejected from his fighter and reunites with Charlie, Dylan and Rain and stole some fighters and escaped the queens ship to attack the alien queen who got the sphere from Area 51. After using cold fusion drives to escape the queens control over their stolen fighters they shot the queens back nonstop(The aliens weak points are on their backs) and killed the queen thus saving the world. After their fighters crashed landed Patricia thought an alien monster is coming out so she shot him but learned it was Jake that came out and the two embrace each other with a hug. 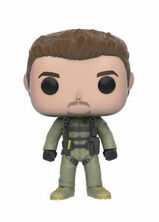