Lava surfing, Interacting with other Toa, Turaga and the Matoran

Jaller is one of the protagonists that appeared in the BIONICLE series. Although he once served as the supporting character in the previous storylines, he eventually became the main protagonist of the storylines of both 2006 and 2007.

In the movie Bionicle: Mask of Light, he was voiced by Andrew Francis, who also voiced Mega Man.EXE.

Originally, he was a Ta-Matoran and he was used to be a best friend of Takua before the latter was transformed into Takanuva, the Toa of Light when the former was slain by Turahk, one of the Rahkshi. However, he was later revived by Takutanuva, an entity which turned out to be fusion of Takanuva and Makuta Teridax and was reunited with his friends before their return to Metru Nui.

When Toa Tahu and the other Toa Mata were out to retrieve the Kanohi Ignika, the Mask of Life from Voya Nui to save Mata Nui's life when the latter was in a verge of dying, Jaller and the other Matoran (Hahli, Kongu, Nuparu, Hewkii and Matoro). 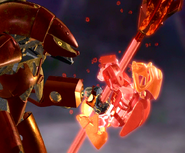 Jaller sacrifice himself for Takua.
Add a photo to this gallery
Retrieved from "https://hero.fandom.com/wiki/Jaller?oldid=1661545"
Community content is available under CC-BY-SA unless otherwise noted.